The Lady Inquistrix produced a data slate and passed it to four star General Zhukov:

"This man, this space marine, is who Brian Redmaw's Great Hunt are seeking.  Briredy Antub has the ability to fill the minds of those who listen with the very stuff of Chaos.  His seemingly banal and harmless chatter just fills space.  Like his Word Bearer master, Readle Merich, those exposed to his evil don't realise just how purvasive and wrong his words are. An unshielded mind listening to these snake tounged warp blasted sorcerors will quickly turn to wallpaper paste. 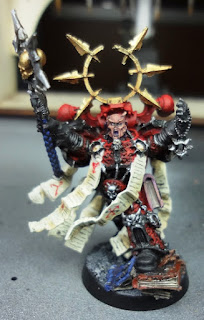 With the right backing, Word Bearer Apostle's like him can raise armies of fanatical brain washed drones to topple governments and eventually weaken the fabric of the universe and allow the denizens of the warp into the worlds we know.  I wish the Sons of Russ luck in catching their prey.  And hope that they do so before the Word Bearers summon any deamons from the warp.

And it should now be obvious why I do not hope to see the Space Wolves transit into the Devos system.  And even if they did, they would not be coming to aid 72 Army Group directly, they would be chasing something far worse than that which you face already."

The Lady Inquisitrix stood up and conspicuously smoothed the front of her regal attire.  Without a further word, she turned and left.  72 Army Group would get no comfort from any distant Space Wolf hunter fleet.  Nor apparently, from the Ordo Hereticus.

General Zhukov fumed inwardly.  He would take this slight out on his staff; their discomfort would exceed his embaressment.  He calmly placed the data slate on his desk, drew his side arm and casually put a bolt designed to kill a space marine into the data slate.

He breathed deeply, holstered his side arm and proceeded with the rest of his tantrum.