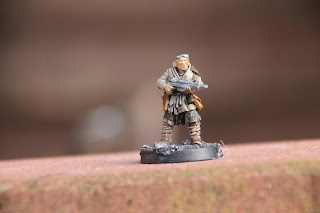 This is Fon.  He is mute.  By which I mean he cannot speak, not that he is a dyslexic mutie.  He's actually plenty clever, as they say in the arid badlands north of the San Cantor ruins.

Using that oft repaired data terminal on his back, he read and write in at least eight languages.  He has a good ear for foreign sounds and a fine mind for making those important connections.  As a polyglot mute he is a bit of rare thing. 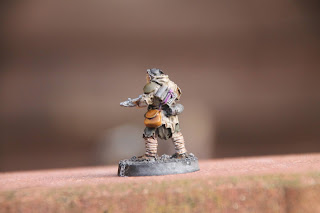 Fon trades his facility to mediate between folks for water and hot sauce.  He's not too fond of insects and the hot sauce certainly helps when most of the food in the badlands is a little light on quality grox.

Of course, life in harshest inhabited parts of Devos IV is not without risk, as attested by his las gun and large calibre auto pistol.