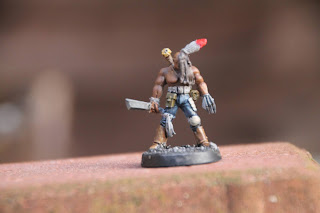 Dineh Nolly Chee has a reputation as a dangerous character, a ferocious fighter in the bandlands. He is a large and physically impressive.  He is fast and experienced.  Life out here is harsh and he knows well the price of wavering, hesitating or displaying weakness.

One of the things which annoys him as a hired fighter is the assumption that he can track quarry across the wastes.  He's not better than anyone else at such things.  What he can do is use his plethora of blades to excellent effect.  He's also well practiced at being intimidating; out in the wastes, ammunition is short, medical supplies are hard to come by and therefore convincing an opponent to back down rather than fight is a winning strategy. 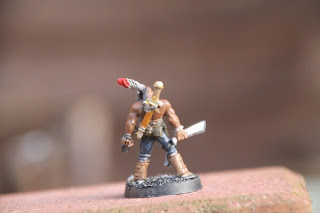 Dineh has a deep, sonorous singing voice and great knowledge of songs of Devos IV; the religious songs from the pilgrims visiting the shrine cities and the traditional songs of the Olong tribes of the grasslands and the wasteland clans around the San Cantor ruins.  Moreover, he understands where the music comes from and how it might be interrelated.

He is following the traditional route of the chieftain elect of his clan; that they work away from the clan as a hired gun to enrich the tribe until their predecessor ceases to chief.  At which time they take up the mantle and the next in line takes up the challenge of bringing in whatever the clan needs but cannot make, find or hunt itself.
Posted by Zzzzzz at 22:04