KK - the vertical version. I did reply to your email. The vertical one. The horizontal one makes me feel queasy.

As for progress. Four Eldar Rangers for the Bel Tain Sacred Guard, Maugan Ra, not my favourite sculpt, but he is (allegedly) death on the gaming table, four vanilla DE warriors and one with a splinter cannon. I've also begun a WraithSeer. Which in the game is a WraithLord who used to be a Farseer, rather than an exarch (see link of the day). And most of a Ravager as well. 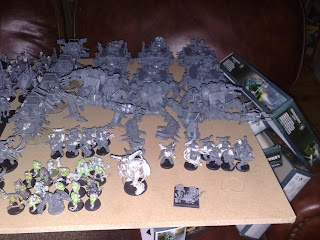 Here is a corner of one of the progress tables. To the left of the obvious Deamon Prince are a unit of Orks lead by the freebie Black Reach Nob. Behind the Deamon Prince are two eight man squads of noise marines and two aspiring champions. Behind them is a row of three Defilers. Behind the defilers are three Predator Anhillators (las cannon) and then three Predator Exterminators (Auto cannon and HB). Down the LHS, you can see the four Land Speeders, with two Spawn of Chaos in front. This whole lot are a chaos spaze muhreen warband. With the obvious exception of the orks, who arn't.