These are my helpers. They are normally quite good helpers, as they lay about on the floor, not getting in the way, not offering advice or bothering me that much. They get restless every hour or so and then I have to take a break (good for me) to excersise them for a bit. 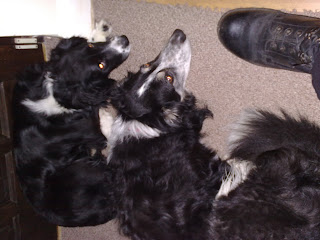 These fine fellows are Death Korps of Krieg (DKK). Made by Forge World, they are cast in resin, not polystyrene. In my expereince, UHU sticks them together much much much better than superglue. They are beautifully sculpted. When I first began my IG, I wanted an ASL army. Only I couldn't find ASL anywhere (it hadn't occurred to me that when GW said 'collectors range' that they meant "these are the figures you are looking for") and so eventually found the DKK on the FW website and began acquiring them. They are not a cheap option. They are fiddly to get together. They represent, per figure, my greatest investment in time, money and effort when compared against the other armies.

Specifically, these guys are DKK grenadiers 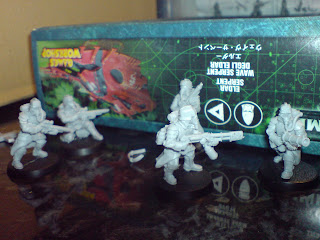 At some point in the recent past, my helpers have sat on my giant figure case to see out of the window. So last nights progress wasn't new build - it was repairing 30 DKK soldiers who'd obviously been sat on. Rah boo poo indeed.

So I lost Monday night's build/paint time to socialising with my tame environmental advisor. Last night was repairs, tonight there is a project (the one I work on, not Devos IV) barbicue. Thursday night should be OK though. Possibly a Chimera conversion. After last weeks fantastic progress with the DE, this week feels a little flat.

I'm also running out of space. I need another figure case for all the new little men. And some boxes and bubble wrap for the tanks. At the minute the cabin is full of boards covered in miniatures. And boxes of used sprues; many with bits still on and a large box of bare ones. And piles of cardboard boxes and two carrier bags of plastic wrapping and trays. So I need a clear out and tidy up. Maybe that'll be Thursday's progress.