Looking at the collection

Ok, I was having a chat with Karitas and planning a little me time (the High Lord of Terror had gone to Newport Pagnell for the evening).

I was enthusing about the value of getting it all out and then packing it all away again.  Now, these days I can only do either the Iggies, or the Forces of Freedom, or my beloved Edlar.  Otherwise it just all gets a bit much.

So I got out the Forces of Freedom; men and women sworn to defend liberty, democracy and the rule of law.  Now, possibly a year ago, maybe a little longer, these guys were all in need of a little tlc.  With thanks to Mr Lee, the army is looking good.  And weighs in with decent mix of rifle platoons and more esoteric units.

Also filtering their way in are the first few Emperor's Children by PVP.  So the ruinous powers are slowly beginning to muscle their way in.

And at Karitas' suggestion, I took a couple of pictures. 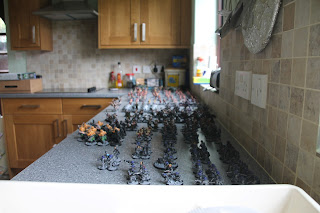 Closest to us are the Devos 2nd Regt, then 13th Mech "The Tigers", then some Emperor's Children and then the 99th "Bloodcoats" Regt.  It's the only time there have ever been boots on the kitchen work surfaces. 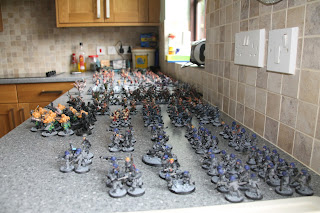 Similar shot, possibly a little better.  Harking back to a post I wrote about an Army looking good, this is not what I meant.  This many infantry figures looks impressive, as Zhukov (the real one) noted "quantity has a quality all of its own".  But it does not really look like a good army, as there is something missing.  The vehicles. 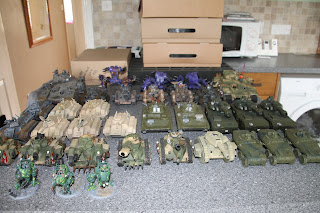 And this is the pile of vehicles that go with them.  There are some that are not yet built and most of them need re-painting and possibly painting.

Also, I managed to stick together the remaining iggies for the new iggy army; the one with a lot of rescued escapees from ebay.