...is often nothing like the look of a real army.  But it's only a game, so that doesn't really matter.  Anyone who has played a THQ game and seen all of those spaze muhreens clomping around in their slightly mad armour will know what I mean.  Those pultrons, those greaves.  it's only that the characters wearing it who believe in it that stops us from dismissing their outlandish attire as preposterous.

The thing is, we know or unconsciously appreciate what makes an army look good.  And its not necessarily a CMON paint job.  Staying with space marines for a moment, our idea of what makes a space marine army  look good has, on some level, to do with unit choices and so on.  I refer you to Karitas' Space Wolves and Pirate Viking Painting's Blood Angels. The ten armies showcased in the Crusade of Fire book illustrate what I'm talking about; well turned out by GW Staff, yes, but also balanced and characterful.

The armies when viewed as whole unit have a believable organic feel; The balance of Dreadnaught, Terminator, Tactical and then the vehicle and character pieces give an impression of a space marine strike force.

A space marine army that is (and this hyperthetical, but you know where I'm coming from) just one Captain and half a dozen or more tactical squads with plasma cannons and plasma guns would look wrong.  I'm certain that for fluftastic reasons one could write a scenario where such a force might be deployed, but it will just look odd when lined up.

Similarly, some of the armies on parade on both GW and BOLS look fantastic (ie fantastically good).  And some of them, whilst very clever and having visual impact, nonetheless look a little contrived. "This lot fight together as an army ?  Really ?"  Again, where a little bit of backstory is supplied then it makes the models hang together.  The trouble is, unless the models themselves are at least in part telling that story, then the army is always going to have that 'slightly odd' rather than 'great army' look. 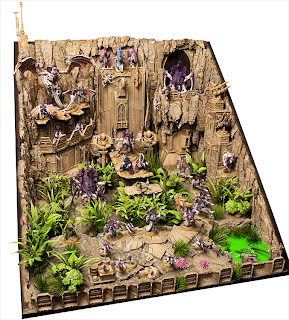 This is an 'armies on parade' winner; and when you read the description, you can follow the reasoning.  However, when you click the pic and look at it, it's not the ravening carpet of 'nids that one might expect.  So very nice, and I don't want to take anything from the artist (and this is artistry, IMO) but it isn't an army, rather the cast of a horror film.  As a diorama, it's fabulous, but I would suggest that it doesn't feel like an army.

If we look at pictures from 2nd and 3rd Ed armies with their bright, contrasting coloured furniture on their firearms, it looks a little wrong.  Now GW at the time might have been going for the more friendly "It's a wargame, but its not real' look.  But the brighter paint jobs don't really hang together.  Sure, if your seven foot tall freaks are wearing bright blue powered armour then there would seem to be no reason why you wouldn't give them bright red bolt guns, after all, they're neither adding or subtracting from the visibility of the unit. But we need something more.  It's supposed to be grimdark, after all.

Moving on to the Imperial Guard, one thing that is needed is mass.  It's the closest thing in the game to a proper army; therefore needs an amount of manpower in order to look good.  I point to Admiral Drax's Cadians and Col Corbain's Corbainian 1st.  Whilst the interesting bits (ISTs, super heavies, tanks and so on) add, well, interest, without the platoons making it look bigger, the army would look less and hence appear a little odd.   As it is, when assembled, these armies give the impression of a cohesive military force; one that could be deployed for any number of purposes.

So, looking different can also work.  Victoria Lamb's original Preatorian Army, Col Gravis's Preatorians and the harder to find on the internet Mordians painted as USMC . If you follow these links, then you can see, the VL Preatorians are finished to a high standard and could certainly represent a 'real' formation.  However, we have now, after the armour-fest of 5Ed, become accustomed to seeing more non-infantry units in iggy armies and the USMC look more like most people's idea of a modern iggy army.

I think this idea of cohesion is where the Black Legion is a 'win' for the CSM; it allows the full choice of units from the codex (without offending fluffbunnies) and gives a theme to what otherwise could look like an explosion on Mr Lee's paint station (in a bad way).

No idea what started that off, I just had a sudden notion and it all came out.
Posted by Zzzzzz at 10:45