Dunno if you caught this, but this post is a sort of sequel to this sequel.  but without a new director and leading lady.

Ok, if you're not the sort of demented fool who spends your children's inheritance on resin, then the following may not have occurred to you;  A Forge World Leman Russ uses several bits of the plastic kit; the track sponsons, the lower hull plate and, should you want them, the weapon sponsons as well.

So, given the way the parts are arranged on the sprue, if you are familiar with the leman russ kit, you'll realise that with each dollop of exquisite FW armoured loveliness, in order to allow you the hobbyist to build a tank with all of the possible options, you get a complete plastic kit.

What that means is after you have built your FW LRMBT, you are left with one of these: 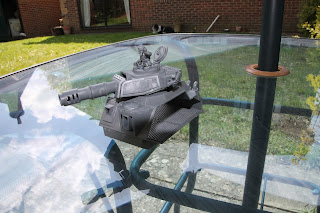 Now, hopefully you focused on the grey plastic thing on the table, rather than the tumble drier you can see in the garage.  I got some bitz 'site hull bottoms (four) and the rest can be safely left out, by simply adding in a plasticard reverse glacis.  That's that then, what you really need are track sides.  Can I get twelve sets of Leman Russ track sides off the bits 'sites ?  Not really going to happen.  And I did have a conversation where making my own mold from GW track sides and casting them up was discussed. But I'm not great at that sort of thing,  fortunately, the internet has come to the rescue.  Puppetswar does these: 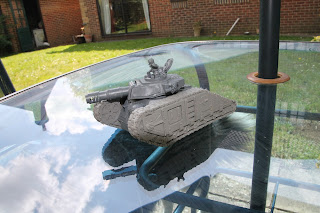 And one painless transaction later, I've got the parts I needed.  And some freebies as well !  But more on that some other time.  Looking at the photo above, the hull is on the deck (table).  And the whole thing doesn't look kool enough.  After some minutes using the extremely scientific and totally objective method of holding a track section up to the hull and moving it about until I was satisfied.  So I settled on the level as pictured below.  Which is fine, but does leave me needing to find some hull sides. 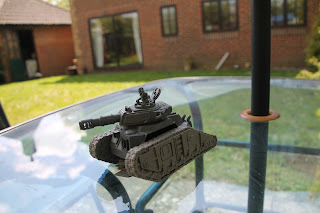 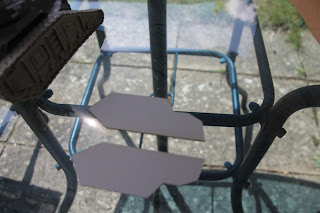 But of course, if there are twelve hulls, then what the tank manufactorum really needs is a neighbour with a CNC machine. 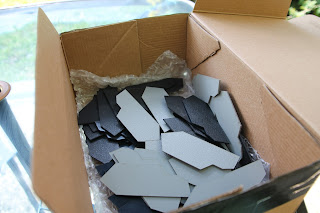 Bonza !  Tanks a go go !  The Devos IV PDF combat brigades are going to get a bit of back up. 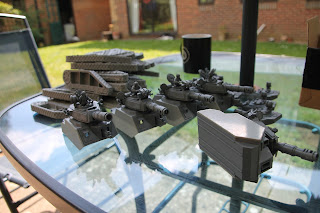 But it all stops for BBQ, so these fellas go back in the box whilst Mrs Zzzzzz nips out for salad :(
Posted by Zzzzzz at 21:00