The end of a bout of frenzied activity

I didn't manage to do any work on these, but thought I'd include them for interest. The fellows with the HB are a viridian MG team. To the right are 1st Ed iggies with shoulder mounted las cannons. I've erroniously mounted them on 40mm bases, rather than 60mm bases. But they arn't going to see competitive use so I'm too worried about that. Also the FW vraksian Hvy Stubber teams are on 40mm bases as well so I might cook up some rule for a half way house HW team movement for these more portable crew served weapons. Any ideas ? Someone already got a house rule for this out there ? 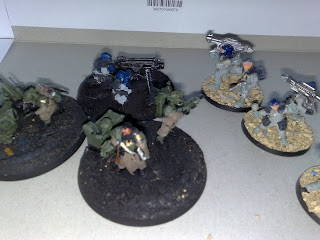 The Vostroyans are ready for the tabletop. The ASL HW teams have a lot of their required paint on, but still need a bit of TLC. 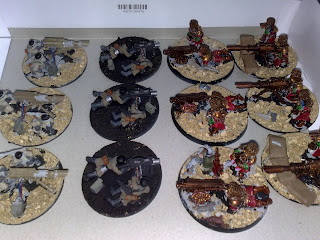 Bloodcoat mortar spam; These chaps are also accumilating colours as well, so they might be ready sometime this year. In action the Bloodcoat's indirect fire assets are rounded out by a battery of three quad guns. hurrah ! 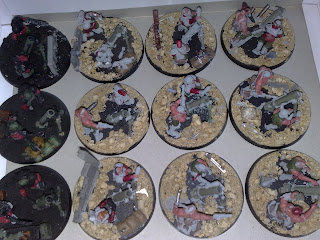 Bloodcoat auto cannon teams; got on a bit further with these. So things are looking up for the Bloodcoats. 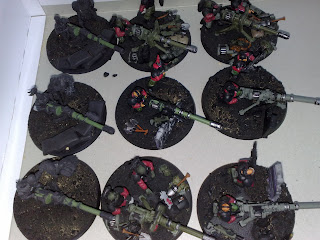 That's more of less it for the time being. I'll be able to do a bit more in March sometime; Hopefully by then the weather will have dried out enough to try out the airbrush. Fingers crossed.

Being back in the cabin in the woods for a few days had me pondering; It does have a 'Hansel & Gretel' feel to it at times (dusk, mostly). A lot of ancient (pre industrial) monster tales are of bleak and lonely places, moors and mountains. Places with little shelter and less food; persons stuck out there may well die. ie travellers in swamps might be overcome by marsh gas and drown, giving rise to willow-the-whisp and boggart stories. 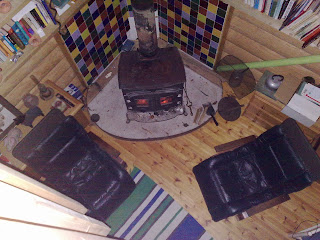 By the time Hans Christian Anderson is writing, the balance of population is beginning to shift from rural to urban. So places that their forebears might consider far preferable to moors and mountains - woods and forests (with their ready shelter and opportunities for foraging) become places of fear and apprehension for the new urban population in the same way that the moors and mountains were for persons in times past.
Anyway, this photo is from the stove in the picture above, taken possibly less than a minute later, but with the flash turned off. I was expecting a volcanic palette, but its come out in a sort of Emperor's Children colour scheme. 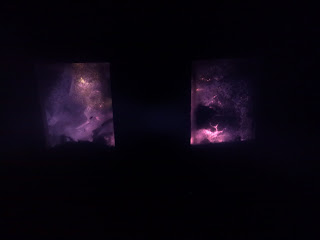 So now in our modern age, when those with the money are moving back out of the urban centres into more exclusive/suburban areas/outlying villages, it is the turn of the city centres to become the haunt of bogeymen and monsters. Of course these are mostly human now, rather than fey or monstorus.
Amongst the modern bogeymen we could list hoodies, rapists, terrorists and peadophiles. All of which are very present threats to the wider "us" and not really the subject for a quick 'fairy tale', although they do figure in some contemporary novels.
I have no idea what locations/people/monsters will the en vouge bogeymen of the future. Or what horror stories might arise (although '28 days later' and the BBC's 'Chimera' spring to mind).
WH40K presents us with a wide selection of bogeymen; from the obvious 'Nids, 'Crons & 'Orks through the more subtle Eldar and Tau to the elegantly self consuming Inquisition and SM. It does seem as if the poor ol' iggies are the only normal people out there...

Auditing the Contractor this morning

But did a bit more painting last night. Again, apologies for the quality of the pictures. The Vostroyan HW teams are now ready for the tabletop. Their Shako/Bearskin/bonnet/titfa's might get a drybrush with a lighter colour, but they're good to go. The Italiari 1/35th scale sandbags do look a little big if you look and think about it too long. Meh, they could easily be sacks of some foodstuff or other. 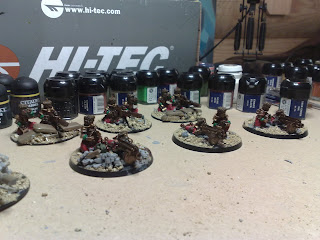 Managed to get a few colours on the others as well. Note coffee cup to the left. My water pots are to the right. ;) 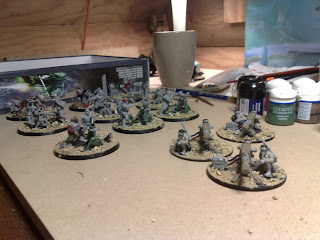 I pulled the ASL HB teams out of the box to continue their decoration as well. Interesting contrast between the set spray-undercoated black and the ones where the figures were brush undercoated grey. I find the black-undercoated figures tend to be easier to shade (well, who'd have thought that ?) but the base will take a lot more work to bring it up to the tone required. That can wait for the airbrush... 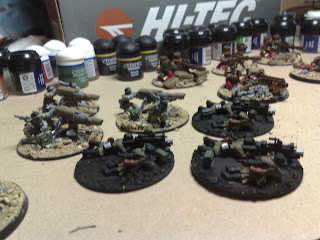 All of the ASL batches appear to have a different coat on their, er, coats. Some a revel paint similar to Kommando Khaki, some Tamiya, some are Kommando Khaki. When the whole lot are done I might go over them with a unifying coat. Almost certainly Kommando Khaki.

A series of boring meetings by day

And painting by night. Back in the cabin, on the second night I'm just about getting back into the, swing of it. Still not 'enjoying' it fully yet, but then I havn't finished anything yet. Which I believe is my great motivator to spur me onto doing more. 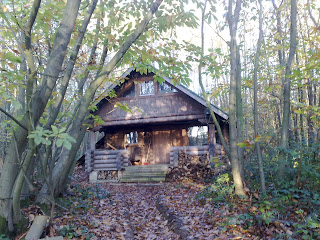 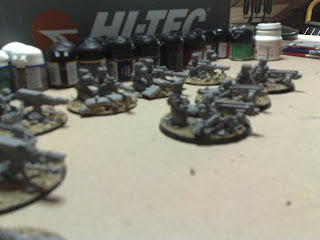 Here they all are undercoated. I don't know where the watercolour brush came from, but it left bubbles on the figures like you wouldn't believe. 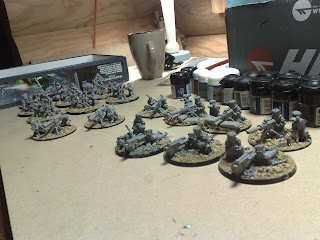 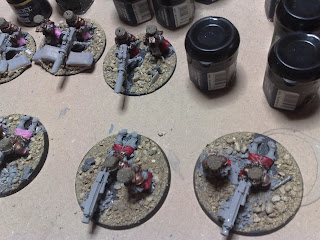 Here are some of them with their base coats going on. You can see the tentacle pink on the teams on the left and the ones with red gore on the right. There's a smattering of green on the mortar teams and a couple of colours on the ASL. Hopefully more tonight. I've brought more or less all of the little men with me to Kent, but if I get these HW Teams done this week, I'll be happy.
Oh, btw, a warm welcome to Soviet Space.

There's work doing in Kent. So I'm back in the cabin for a week, a chance to get a bit of painting done.

Now, I must begin by acknowledging that 40K is a game. And that the FOC thing does actually work, ensuring that there is some commonality in the game, based on the background.

You would, with the million tanks and countless marching boots of the IG, send whole regiments to have a look.

I know that what does happen is that (f0r instance) IG armies are explained away as detachments from the different branches and combat arms that were sent to investigate. But it would be nice to see a deployment like that of the Cadian 8th from inside the old ed of the IG Codex (yes, I do realise that it was photoshopped). Where the regimental commander is manovering companies and the company commanders are manovering platoons.

When I use a platoon, I try to do it whole and complete; ie if the platoon is of four or five squads then it is always deployed as those four or five squads, and not eaten away at to provide points for a Valkarie (a Valkarie that that unit or formation does not usually have).

Now I realise why I appear to have multiple IG armies...
Posted by Zzzzzz at 15:24 3 comments:

Slowly crawling forward with this....
Posted by Zzzzzz at 15:03 No comments: