As I'd never actually qualify for the 6MMMRC in the first place, I am only breaking my own rules.

And of course this

Because the "baddies" don't get enough love.  Except the Slanneshi ones.  But this is PG rated blog, so there'll be none of that here.

I do not yet have one of these:

But I still have two months to train the kids that this is what Daddy wants for his birthday, so I hope to score one of these before the end of the year as well !

So the rule was no 'new' purchases and all of these break that rule; which was intended to focus resources on completing all of the existing projects.  Oh well.
Posted by Zzzzzz at 22:17 9 comments:

Obviously my normal pattern of posting on Tuesday and Friday has stopped for the minute.  It's nothing bad, just changes brought about by a change in family circumstances.

Normal service will be restored as soon as possible.

Here is a picture of some iggies, just 'coz the interweb needs more. 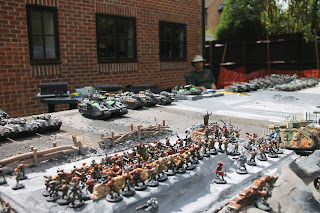 There’s a post over at Fallen Princes where Inspiration is the name of the (background to the) game.   He’s quoting Byron, no less !  There’s a bit of serious literature it will be hard to live up to.  But it did prompt me to offer up what I find as inspiration.

I have received some favourable feedback for the background and exposition pieces that I have put up on here over the years.  A lot of the more recent posts I’ve done have been sort of self generating; feeding off the fluff that other bloggers have created for their iggies is huge fun; collaboration like this is what this hobby is all about (for me).  So one huge inspiration is the work of other people who are, hypothetically, whirling away through the blogosphere even as you read this.

Forge World’s Imperial Armour books are a main source for models upon which to build 72 Army Group.  But this is heavily cut with my reading of military history and own experience in BAOR; this is one source of expositions about how and why the Departmento Munitorium would function.  Military history tends to be written on a mico and macro scale (more on this later), so this fits in well with the pieces I’ve published on the blog.

I harbour a long running and deep seated antipathy for Dan Abnett; he owes me a lot of sleep.  His (IMHO) excellent books about the Inquisition and the Sabbat Worlds crusade are a clear inspiration and pool of ideas, fluff and so on.   So it would disingenuous to list inspirations for an Imperial Guard blog and not mention him.

The mini’s themselves are a clear source of inspiration; to get variety into my ‘army’ has always been a goal – the Hulin Rifles are Vicky Lamb jock bits with Pig Iron bodies.  Seeing nicely done minis go together is inspiration in and of itself – there will be Void Dragons accompanying the Craftworlders who hunt down the Emperor’s Children – adding Corsair garnish to the Craftworld salad and Cabal croutons.   All inspired by ‘The Doom of Mymera’.

The DKK Assault Brigade army list merely vindicated my existing army – itself based on 19 Krieg Armoured Regt from IA1.  So it’s not all driven by FW.  And not all driven by Dan Abnett – I’m adding Blood Pact, not First and Only.  And obviously not all driven on reports from Op Granby or writings by Beavor, Hastings and Holmes.  But of course, there’s a little bit from here, a little bit from there and Lo! And behold; another new snippet about the Devos IV campaign gets posted.

From outside of the 40K/military history bubble, there’s any amount of concepts and ideas pulled in from other places – the profiles of all the officers owe more to FRPG than 40K; there’s the obvious draw of converting Star Wars models to fit the world.   I think that there is a lot of other literature out there, some sci fi, some not, which could all feed more posts that further explore the worlds of the Dynorwic Cluster.

Occasionally there might be a thing that happens during the day or someone I meet or have met years ago, all of these things can inform what I write, even if they do not make it into the finished passage.


So, I draw inspiration from where ever I can get it.   I commend the ‘background’ tagged posts to the house.
Posted by Zzzzzz at 10:40 2 comments:

Many thanks to Mr Lee for an incredibly fast first look at a Raging Heroes TGG model. This one is obviously a gun servitor.  One thing I am really enjoying about Mr Lee's work here is the sort of Piquard/Borg thing going on.  One could almost imagine her comrades 'rescuing' her and undergoing the painstaking process of de-servitor-ing her (she'd need new prosthetic arms though).  And post recovery, her turning out to still be dedicated to Nurgle at some critical point months later.  Who knew ? 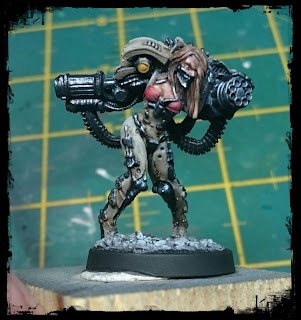 In order to fit into the Devos IV story, she's actually been done to match the other zombie/servitors who are a used by the Warpsmifs of 'The Cleaved'. 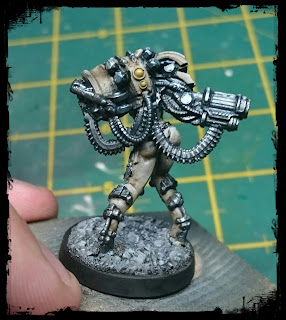