One of the more obvious consequences of recent political decisions taken here in recent years is the invalidation of the peace process in Norn Iron.

No matter that the GFA and the peace process were imperfect, nonetheless we have had a much less tense existence since 1992ish.  The basic tenant of the arrangement was that as both sides of the border were actually in the EU and therefore the rules around just about everything were the same so which side of the border one lived was not so important.  But changing the rules has picked at the scab and the wounds have re-opened.

So browsing table top fix, I was slightly surprised at the timing of this as a release.

Whilst the game seems to be well researched, I was left wondering how the families of victims would react ? But gaming is really pretty niche and they are unlikely to learn of it's existence.  Given that there were already table top skirmish games out there when we still had boots on the ground in Iraq and Afghanistan (were still losing friends and relatives), I possibly should not be surprised.

I know I've said before that people's hobbies are their own.  And now turning around and holding something up as, in my opinion, poor taste might seem hypocritical.  But the 'it's only a game' line is unlikely to impress those mothers, sisters, daughters, fathers, sons and brothers who are still our neighbours and colleagues.  If I remember some of the victims names, those in the province will tell you what they had for breakfast the day they were murdered.

This is not a case of 'get over it' for those involved.  People are still being killed (by 'accident': "Sorry, we were aiming at a policeman.").  And our current government appears to not understand or care that their continued mismanagement is making things worse.

We should not pretend that these events did not happen, but turning them into a game is just going to play into the hands of those on both sides who have no interest in how clever and balanced your card game is, they will just use it as one more small piece of ammunition, one more piece of kindling in the very real idealogical bonfire of what is still part of the UK.

Careless at the very least.

Unpacking DKK now that the Kill Team release has been announced

If you read this blog with any frequency at all, you've either seen this or made a conscious decision not to watch it:

And knowing my penchant for the DKK, you could be forgiven for assuming my unbridled joy.

So as you follow me down this particular rabbit hole, do please remember that I'm a middle aged, self aggrandising arse with an unjustifiably high opinion of my own opinions.  And we need to wed this to the fact that I'm not GWs target audience.  And if you've read this far, you probably aren't either. 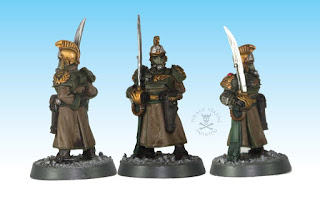 The first hurdle to unbridled joy is my own innate snobbery.  We all like it when we know a really good pub or bar and no-one else we know is aware of it.  Or we support a local team in the national game and can feel like we're more of real fan that the thousands of Man Utd fans who've never been to Manchester.  Well, for me for a long time it was the DKK; despite not being the Steel Legion I was looking for their Forge World niche-ness and resinous awkwardness were something to revel in.  I was hooked and spent a lot of money having them painted by someone who was good at it in order to revel in the Glory that was my DKK collection.  So mainstream plasticality means the end of the FW lines and the inevitability of the DKK becoming more widespread.  Just me being an old fart. harrumph. 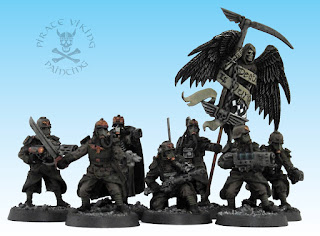 Allegedly, the new sprue has an interesting and diverse selection of parts.  On some of the kreig FB groups some people seem to think that they can see Grenadiers.  FW haven't stocked Grenadiers for over a year and there are no grenadiers in the selection as far as I can make out, so it's not even as if you could build one in ten as Grenadiers; y'know, buy eleven boxes to build ten rifle squads and a Grenadier squad.  Of course two or three in ten (given the modular nature of the minis) might be better (?).  But I already have Grenadiers, engineers, a platoon in summer uniform, Uhlans and so on.  There's nothing here I need... 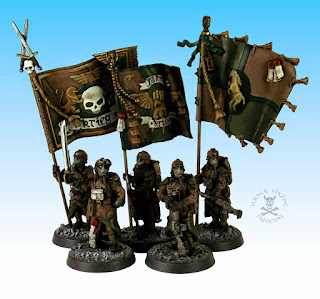 And of course the elephant in the room is that the DKK attract a lot of inappropriate attention due to their aesthetic, which is viewed by some as redolent of Nazi militarism.  This is not helped by the fact that their name is the German word for war.  It's possible that I contribute to this myself by using German unit designations and giving the character models vaguely German sounding names.  But there do seem to be some people out there who latch on to the visuals, hear the name 'Kreig', read the backstory and instantly turn all brownshirt.  I'd like to stay away from all of that but the advent of plastic Kreig is just going to ramp it up.  Maybe. 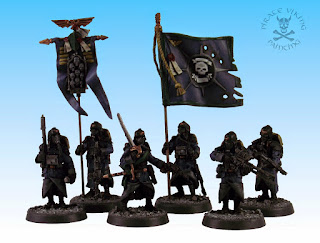 And the last thing is that the plastics are going to be bigger and chunkier than the FW resin fellas.  Of course this is not an issue, people are different sizes.  Admiral Drax is bigger than me and Mr Lee is bigger than him.  And it won't really matter on the table top as even as a player, you are normally 4' or more away and small differences are hard to spot.  And I'm not really a subscriber to the 'they're all clones' idea either.  I'm just old and resistant to change.  To be honest I'm not sure that I'm even cheesed off that they are plastic from now on.  These days a GW plastic army is possibly as expensive as my resin one was when I bought it.  It's just me being a grouch at my loss of cache.

Having said all of that, you're still wondering, aren't you ?  Of course I've asked Col Gravis for a box.  But only one.  for a look.