Every so slightly freaky

There's someone on arsebook called 'I fucking love science'.  There's some quite interesting things that come from this page.  Anyway, I'm half way though Grahame McNeil's Mechanicum.  And then I saw this: 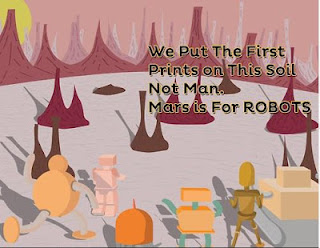 I can recommend to anyone keeping a reserve of unmade Chimerae under your workbench just in case you need them.

The gap previously seen in the previous post has moved up the formation and is quite evident here. 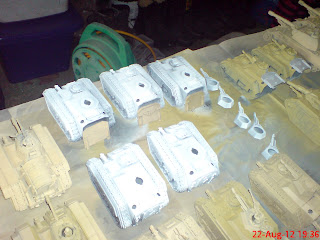 And this morning plugged the gap with the final bus and base coated them.  So there are now five more stages. 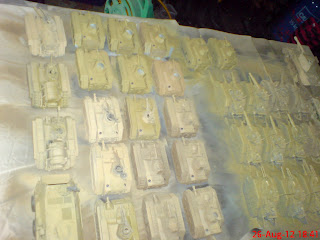 But the new kitchen arrives soon and so these fine fellows are getting boxed up and the table put away to make way for tiles, ovens and kitchen units.
Posted by Zzzzzz at 21:32 4 comments:

So, since the huge effort of building the DKK LRMBT fleet in a day, they have been out on the table.  Track guards and antennae fitted, undercoated and as much basecoat as I had applied. 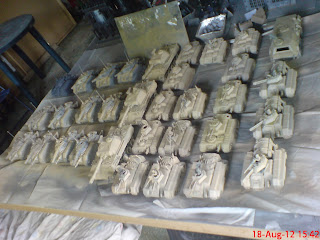 I had a good look at them all and was fairly pleased.  Only three more Chimerae to go.  Two of which I wanted to be Eagle rear door, mid turret command vehicles.  And one to plug that hole you can see towards the rear of the Chimera formation. 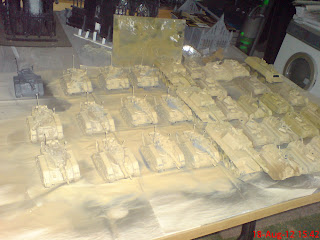 A decent coat of Tamiya German Grey for the you-know-who's panzer in the rear corner.  2iC in front of him and OC in front of the 2iC.  Then three troops of three, with the anihilator or exterminator as the No3 tank in each troop. Where the ASL tanks were loaded up with stowage, the DKK ones have enough detail to stand on their own merit - the engine filters providing enough interest to not have to do my swede in figuring out where any stowage might go on these ones. 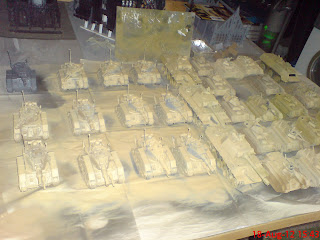 So I was thinking about the camouflage patterns and the markings.  These would be done before weathering and the addition of pre-painted stowage.  Hummm..... stowage.  STOWAGE!  Fek !  Better see if I have any.  Oh yes, still here: 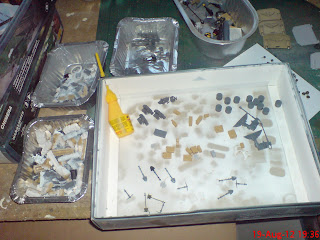 Soft luggage bottom left, hard objects top left, comms kit t.d.c.and second load of stowage in the old model box awaiting undercoating.  Tools, spare road wheels, track links and so on all to do.  So with the comms kit and hard spares (what some of you may recognise as stuff that the QM(T) didn't want to give you) and the softer luggage (the things at the QM (boots and socks) didn't want to give you) I had a look at the way this would be arranged on the model(s).  I quickly deduced that the as-built Chimera doesn't really have much space to hang, drape or otherwise 'dress' the model.  However, the mid turret, modern looking hacked about ones not only demand some stowage (to cover up the holes where the las-guns arn't) but will actully look a lot better.

So I jemmied the eagle doors off the back of three finished about-to-not-be-platoon-command-vehicles-any-more.  And have resolved to replace the five as-built Chimerae with mid-turret conversions.  So now my motor pool looks like this, worse than it when I started.  Oh well. 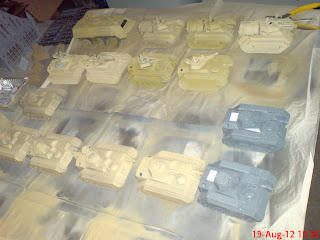 Fortuately I think I have another three under the bench.  Only two more to get. 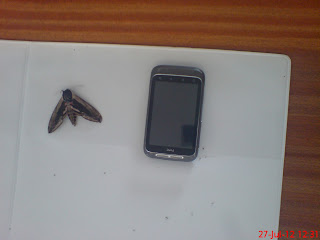 A moth.  South Bedfordshire, late July 2012.  Next to a smartphone for size. No idea if its a native species or herald of some moth/nid invasion.

If you're not Dai, these fellows are a sort of, er, umm, Necromunda gang.  More or less.  Can't wait to see the police crusiers go 'round a corner and meet this lot coming the other way. I keep getting an image of Gary Oldman in a linen suit 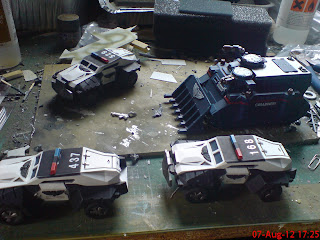 Had to pin most of the wheels back on, as they had obviously been smashed off in the post.  But the cops have gone in the box with the Cawdor gang. 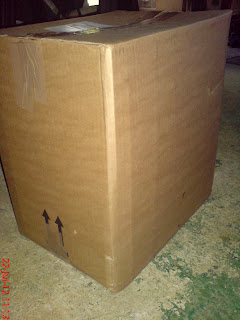 So Karitas just happened to pop 'round, as one does. Amongst the usual flurry of activity that goes on here whether I'm home or not, we slipped into the garage to keep out of everyone else's way.

We chatted over the number of projects on the go.  And then began just cleaning up the workbench.  Lots and lots of stuff, which we eventually decided was detritus; the flotsam and jetsom of the hobby, was consigned to the wheeliebin (if you don't have wheelie bins where you are, this is what they are).

So we had made a bit of space.  Which normally, I'd promptly fill with another rushed project and then grind to a halt when I ran out space.  I think I must have conveyed how daunting it was to have such a lot to do.

Karitas asked me how I planned to approach things.  I suggested that one model a week, perhaps setting aside Thursday nights, would enable me to eat the elephant one mouthful at a time.

He had other ideas.  He was not daunted.  He was inspired.  He was sure that with a little gumption, we could forgo the modest game he had already prepared for.  We could built tweleve DKK Leman Russ before dinner.

So we did.  Learning points for me are:


Got some hobby mojo here, looking forward to next week.

The greatest ever single day for British athletics

Mrs Zzzzz and I were only there for the morning.  We watched the women's heptathletes long jump and spear chuck the women's pole vault heats and men's 100m heats.  So was actually there, watching Jessica Ennis strive towards her Gold Medal and can put my hand on my heart (on the outside of my chest, not directly onto my heart, that would sting) and say I have seen Insane Bolt run 100m at the Olympics, even if it was just a heat.

This is the view from our seats.  It's less than 1 minute of footage taken on my mobile phone, but might give you some idea of what it was like.  Coming up the stairs and emerging onto the stands is an awe inspring expereince in itself.  The level of noise when Miss Ennis and the other two Brit girls got up to do their stuff was incredible.  I spent five hours of my life sat on the edge of my expensive plastic seat, close to tears.  80,000 people all cheering for the same thing is quite an experience.  Especially when the home crowd's darling steps up.
This is view of the Pole Vaulting area.  I think I was trying to actually capture some of the action.  Was it worth the wait/money/bitching in the press ?  Yes.  Am I going to Rio ?  I'm seriously considering it.  Was London paralysed by the Olympics ? No.  It was well organised and ran better than an ordinary day.  Our first visit was to the Dressage stage of the three day eventing.  There were extra hi viz pink signs all over the underground and main line stations.  There was a cadre of Olympic volunteers, all of whom were enthisastic and well briefed, to ensure that the spectators got to the right place.  And G4S' new subtle camo uniforms looked very smart.

I am impressed it went so well, from an organisational as well as results POV.
Posted by Zzzzzz at 08:57 2 comments:

Casing about for inspiration

Continuing on from the 'on the workbench' theme. Part of the problem with beginning all your projects at once is that you then overcrowd your workspace and run out room.  Sort of painting yourself into a corner. 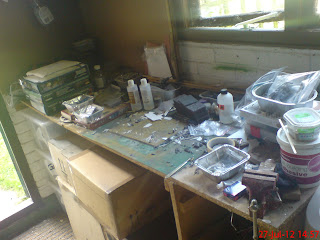 This is it having picked up the 'Grants Spectres' and their bits and thus creating a modicum of space in the middle.  What I need to do now is to use that space to enable me to clear the rest of this up.  Historically, what has happened is I've simply thrown down the next idea to flit into my head, thus the back of the work bench, towards the wall, is in fact lettered with six years worth of dust, off cuts, spider webs, dead flies, odd arms and so on.  The actual MDF workbench itself will be replaced with what is currently my kitchen work surface in early October.  I'd just like to thank my dad for the help he has no idea that he is soon to render. 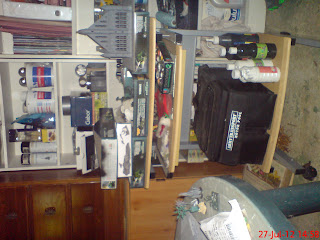 Sorry, forgot to rotate it.  The shelves behind the computer deak might look like a treasure trove of raw materials, modelling supplies etc.  And in one sense, they are.  If I gave them to you, for instance, you'd probably come up with all sorts of ideas for them.  But I see a number of unfinished projects - Void Dragons (used to be Exodites, but I bought IA11), some more vehicles for IG armies and a number of terrain peices - large buildings (ie several packs of foamcore and lots of left over bits of Imperial City).  I am working on a grand plan.  It really is a grand plan and there's years of work here before Devos IV is finished. 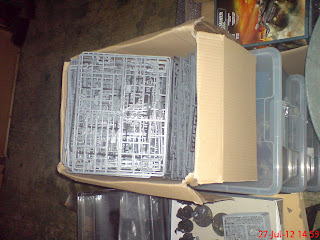 One of the best and worst things is having large quantities of sprues with half the bits used.  It does mean that half of the bits are unused and therefore fodder for more projects (once I have bodies and legs for my dark mechanicus preatorians, I have more than enough IG heavy weapons to build my clanking army of doom).  But there are loads of them and they have to live somewhere.  The top picture shows boxes under the bench.  Lots of sprues there.  And elsewhere, too. 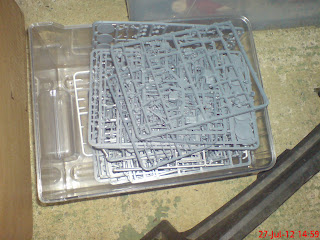 They get everywhere.  If only I could finish all of my imagined projects, I could fill my wheelie bin the rest of the bits.
Posted by Zzzzzz at 06:00 4 comments: