Looks like we're in for a treat, eventually.
Posted by Zzzzzz at 20:28 5 comments:

Chaos Army - The jam in the coalition sandwich.

So I need more options for troops. 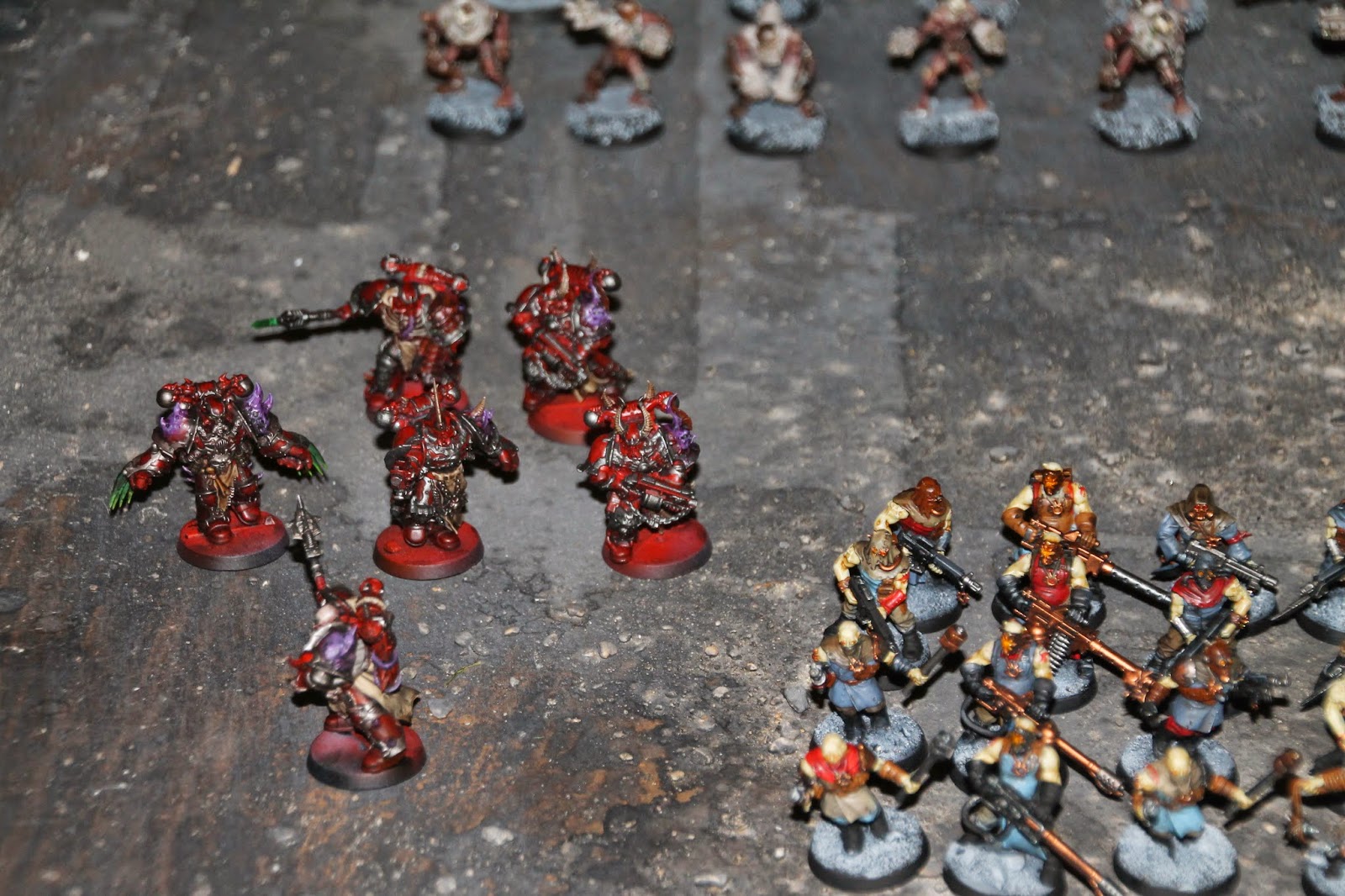 Left flank.  5 DV Chosen  plus the champ with the whackin' stick. 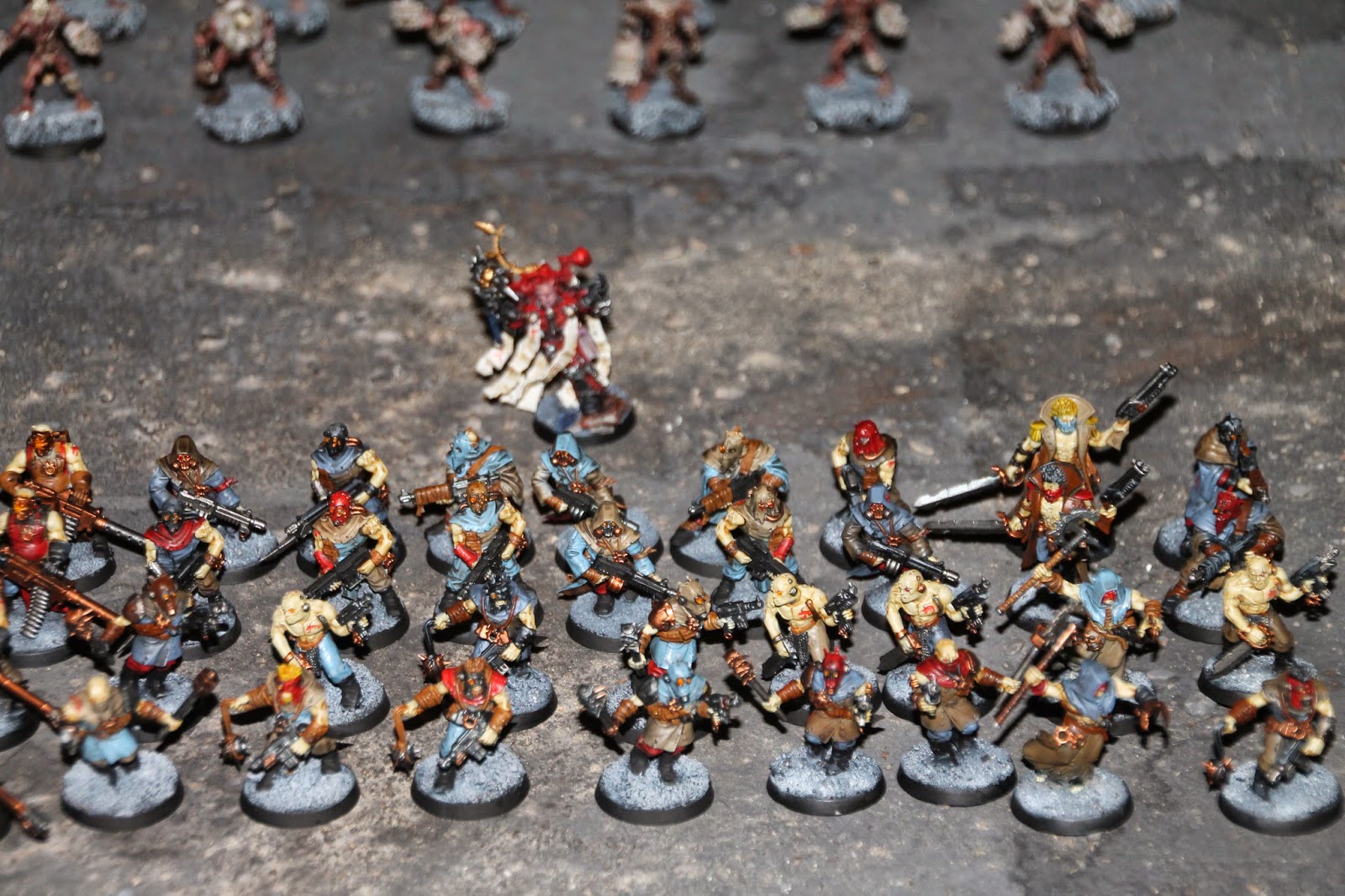 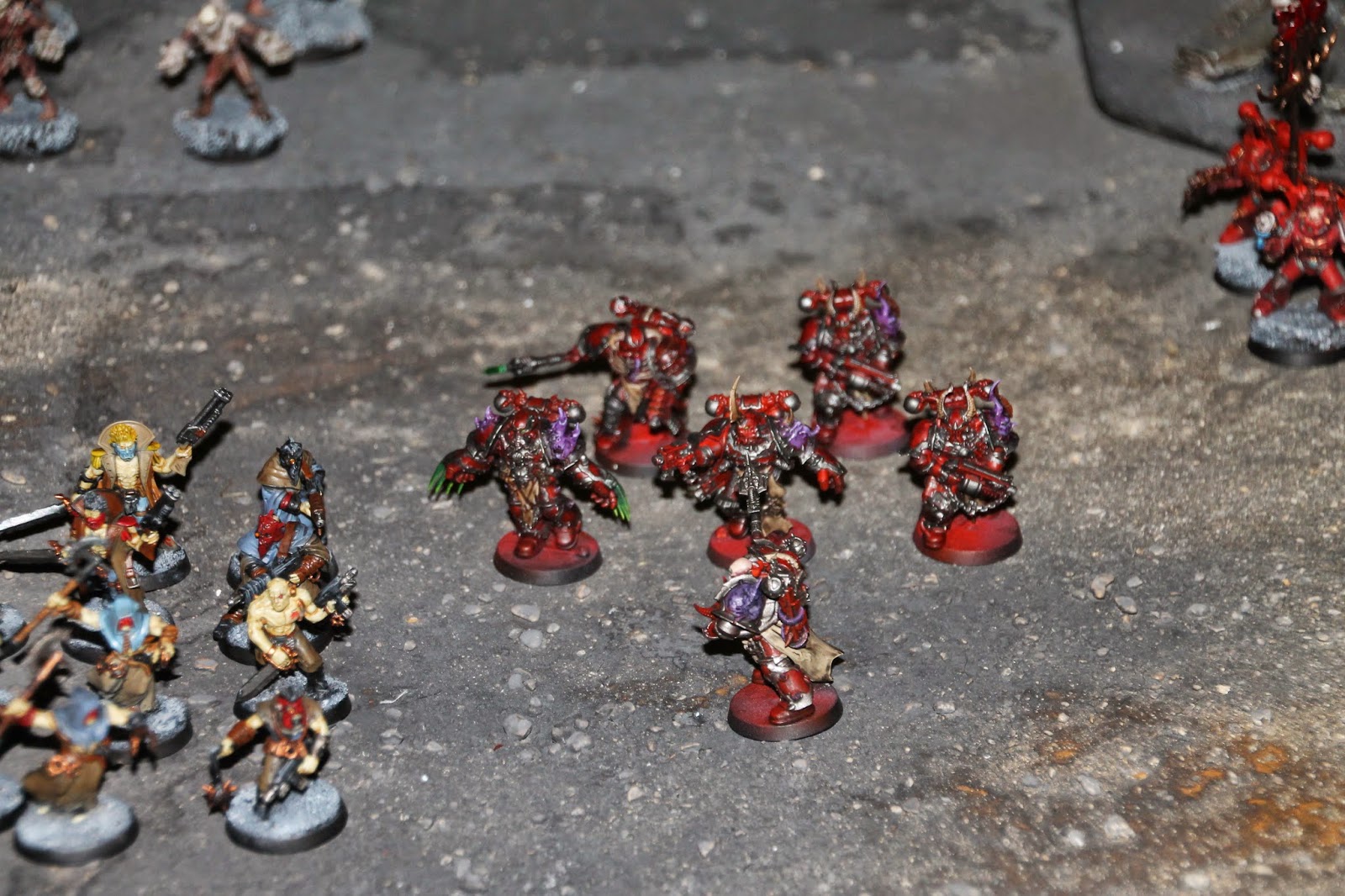 Right Flank  Five more chosen.  and another champ with a whackin' stick.

Which is all nice, but what about a bit of colour ?  Themicly, of course, a chaos army is already a little bit colourful almost by definition. 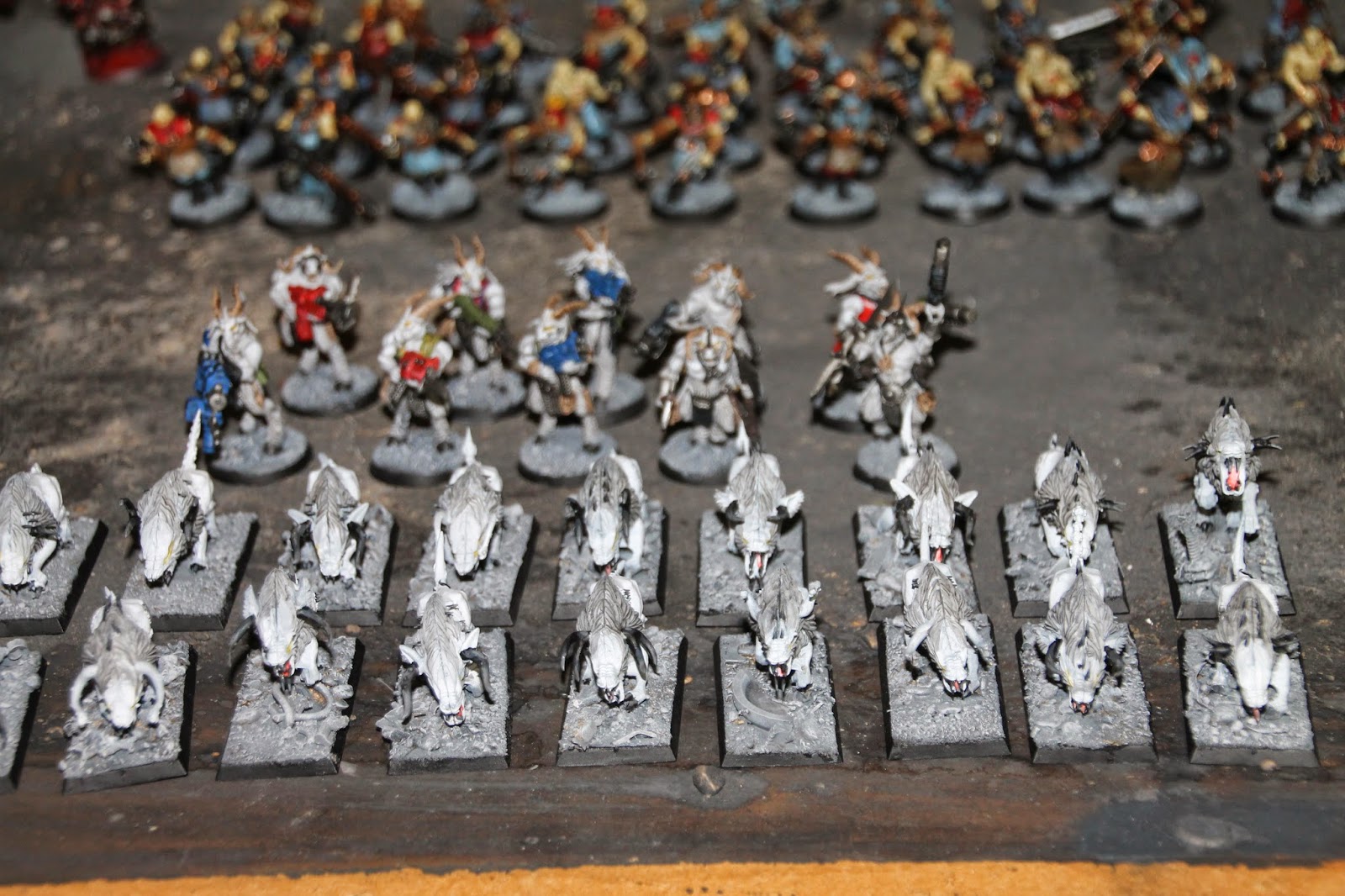 
Now there are ten Broo in the photo, but only four have bolters and one has a HB. So only five playable as SM Scouts. And the twenty chaos hounds who are only legal if you suppose that as there has not been a new Eye of Terror codex, their entry in the existing one stands. 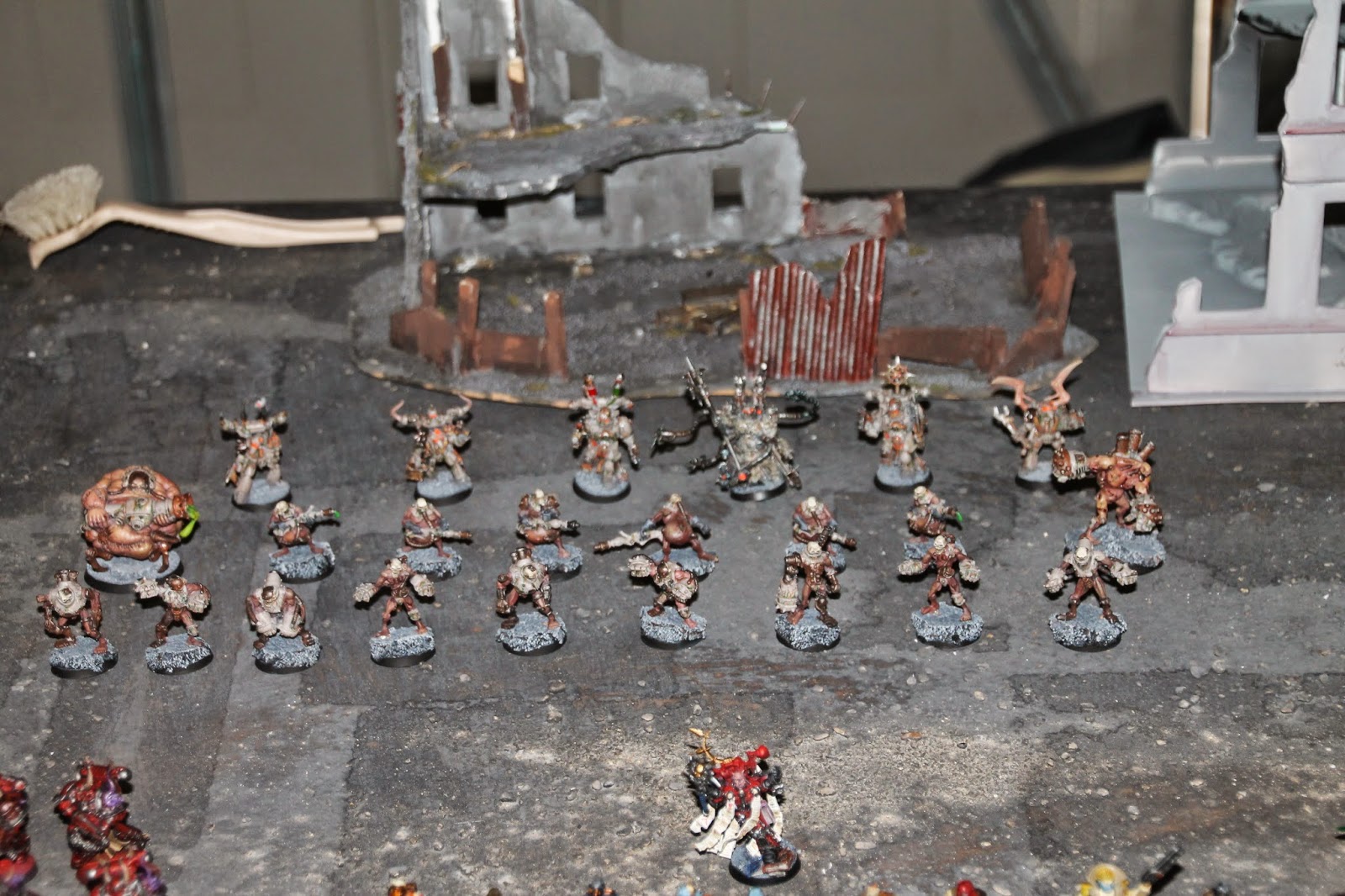 Well, that's me options.  it feels a bit light on vehicles, but there is a plan in place for that, it just ain't gonna be in place until years after the upcoming fight.
Posted by Zzzzzz at 12:01 13 comments:

Chaos Army - developing the coalition of the willing

So the core of my CSM army is the purple spearhead.  I realise that sounds a bit risque, but I suppose it's Slanneshi army, so its to be expected... 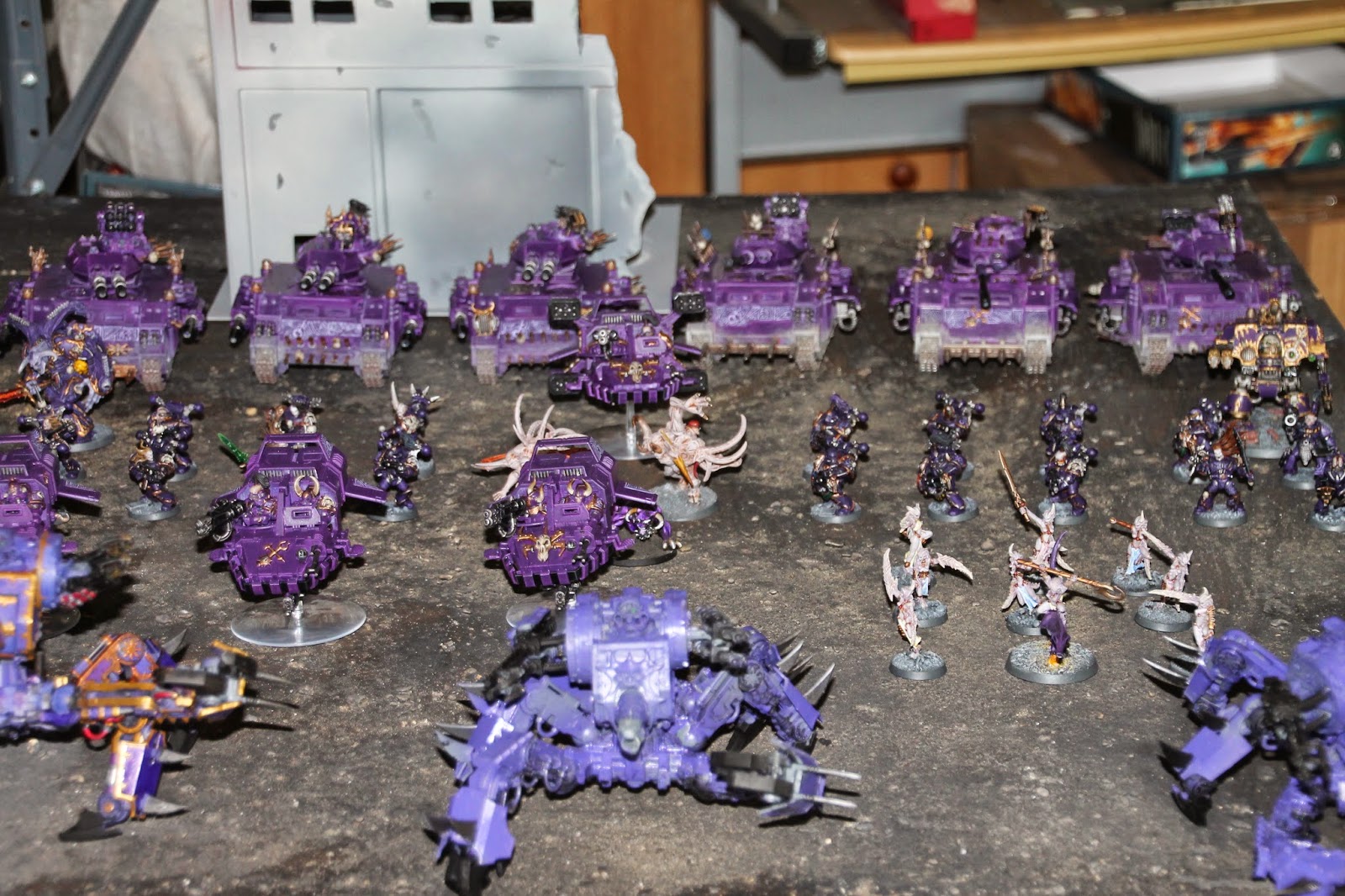 This picture is more or less the whole bunch, which looks like this: 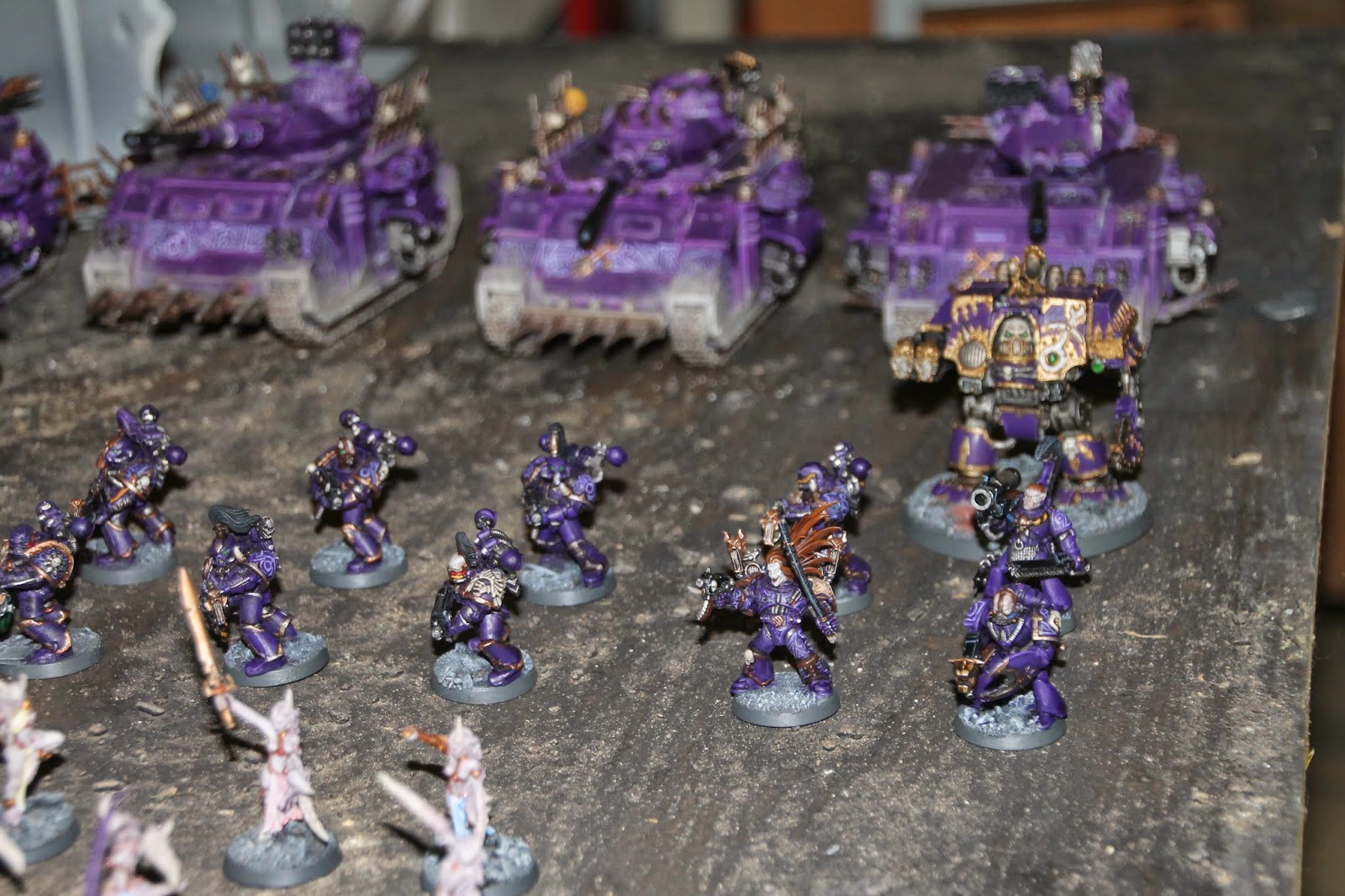 Pict showing the sonic dread anchoring one flank.  The plan for this army was always to have double lash of submission deamon princes in power armour just swanning about the midfield, lashing units out of cover and straight in front of the predators and noise marines.  Good plan eh ?  Yeah, I'll stick with that.  No, wait. sad face - not with this codex. 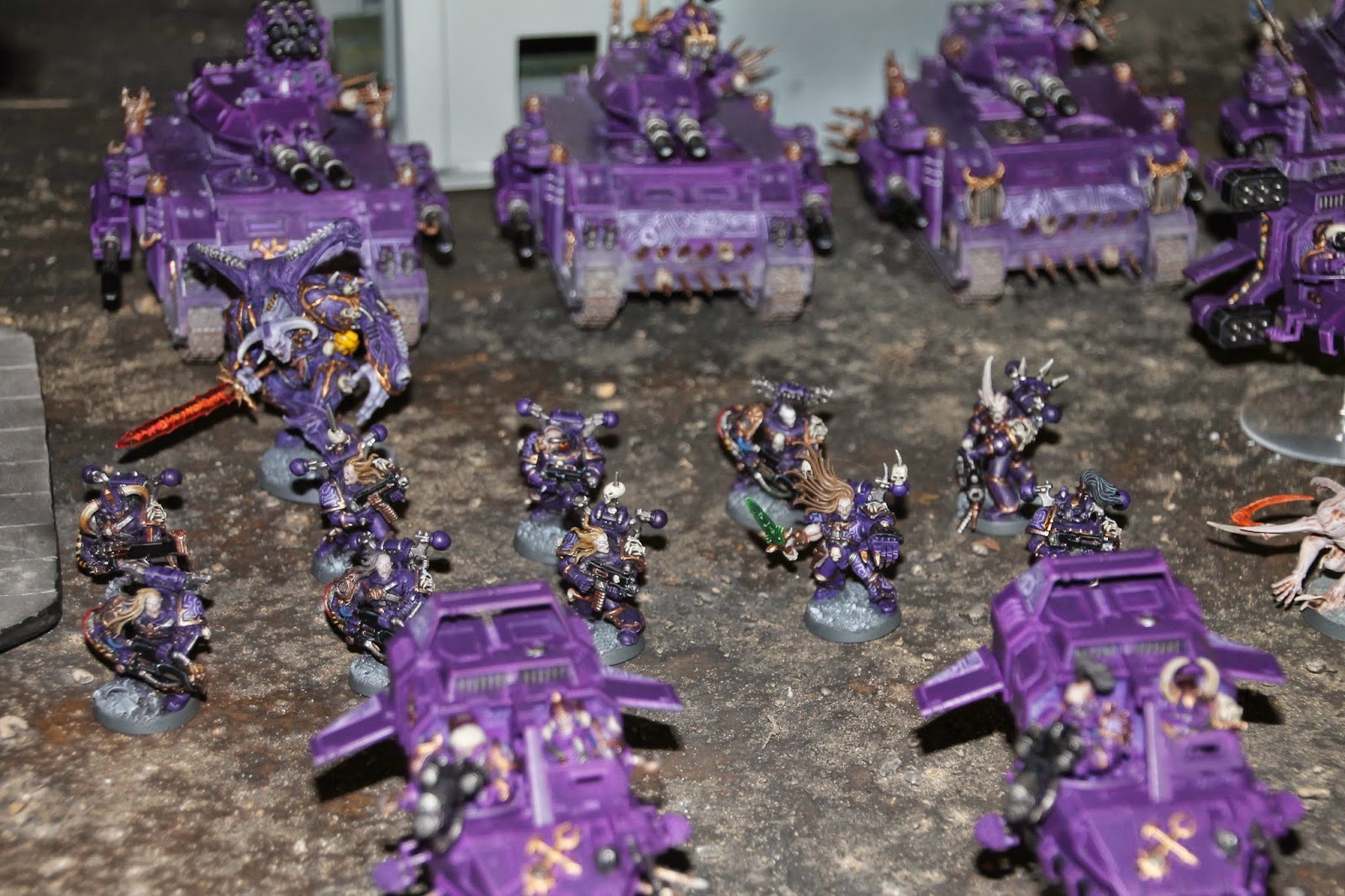 And another pict with the Deamon Prince.  So this army could have a Chaos Lord added, which, paying the points for the right S&M Club membership, make the Noise Marines troops.  Otherwise I'll need another plan.
Posted by Zzzzzz at 11:45 5 comments:

Chaos Army Initial thoughts on the coalition of the willing.

I think I'm gonna base my army around a Titan.  As an homage to it's creator.  It's only fitting that Karitas' army should be wiped from the face of creation by something made by his own hand, yadda, yadda, yadda. 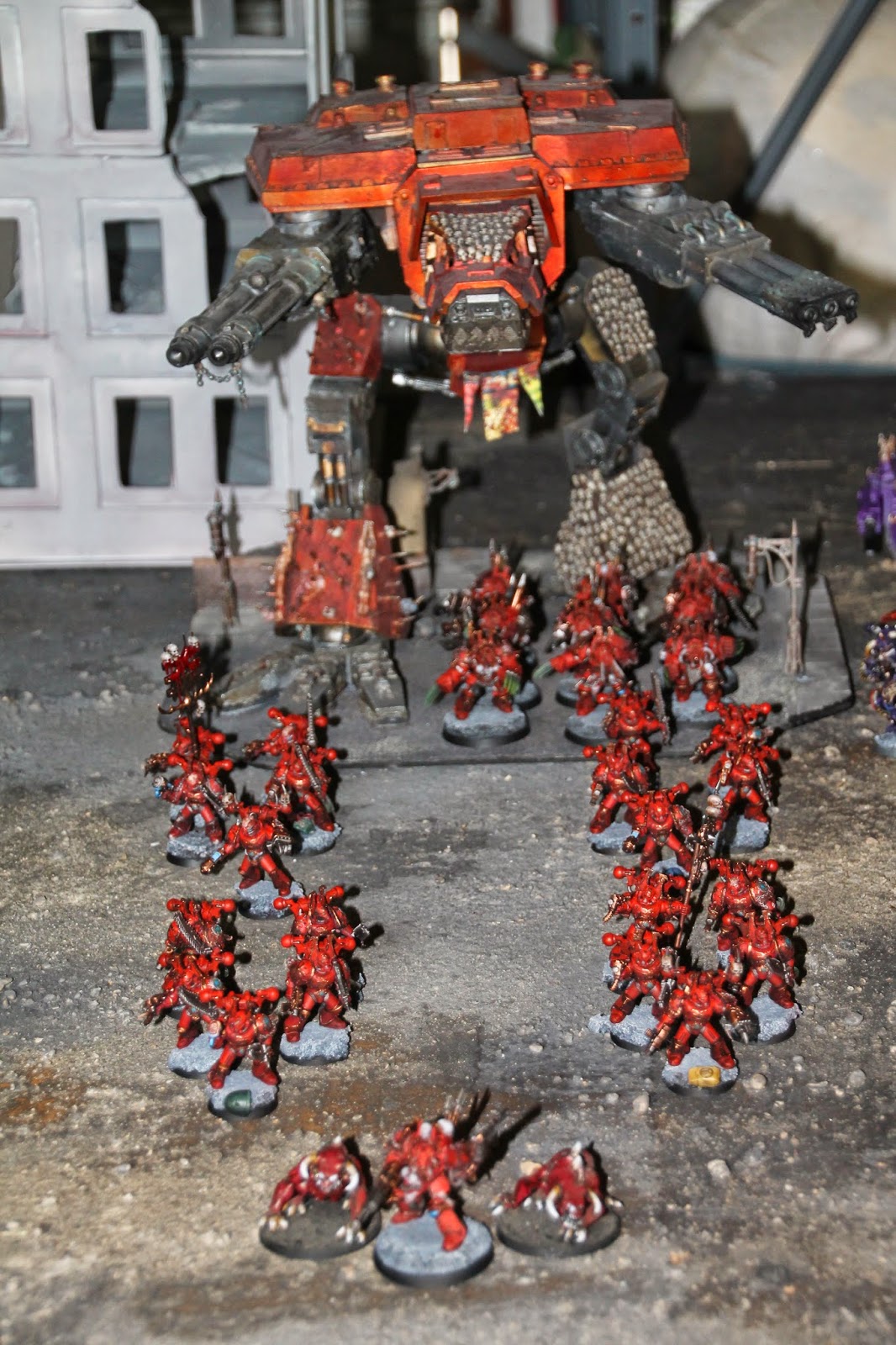 Annoyingly, furies or summoned lesser deamons don't seem to be in the new CSM codex.  So they'll have to be allies.

I think I'll be saving this lot for the Apoc bit at the end. Maybe.
Posted by Zzzzzz at 08:17 2 comments:

Happy Friday 13th !  I'm writing this on Wed 04 Jun 14 - my last night away on the project I'm leaving this week - new job soon (same employer). Ok, so this post technically contains spoilers if you have not already seen this spring's Godzilla film.  But, 'onest 'injun', none of them are surprises.


I came across this:

The modern US military have, I expect, an uneasy relationship with Hollywood. Hollywood wants to depict aircraft carriers and other hardware, the film (any film, not just this one) involves a lead character who is an officer in the services.  Hollywood shows US servicemen in a fantastic light, performing super human feats of endurance above and beyond the call of duty, for all the best of intentions.  And the hardware is often shown off to good effect as well.  In this film in particular, the US military's ability to throw together a HALO insertion of a SF platoon plus attached hero at what we supposed to believe is an hour or twos notice gives a favourable impression of a capacity that Uncle Sam wants everyone to believe is as easy as it seems in the film.

However, the poor ol' US military is more often than not depicted as deploying in a tactically naive manner.  In this film, the US Navy crams all of it's assets into the space more usually covered by an infantry platoon and parks it's major assets directly in the path of a large hostile entity.  Navies of the world have had the capacity to engage targets over the horizon since WW2.  I suspect that the real first act of a carrier group would be to ensure that there was an appropriate amount of space between themselves and the thing they were shadowing.  ie at least 22 miles, not 22 meters.

And the poor ol' SF Squad sent into the the bush on Hawaii on a recon mission are shown in (what in wargaming terms would be base to base contact) close proximity to something that was just about to be targeted with a tommahawk or airstrike.  So there are nice shots of men running away from explosions for the film makers, but really, there should be no one anywhere near there.  If the enemy has a particularly effective EMP weapon, does any really think that any modern air force is going to fill the sky with enough F22 Raptors that it'll look like Raptor rain when it goes off ?

And the next thing is the apex predator aspect of the film.  Now here's the thing; I am untrained in the ways of predators and prey animals.  However, I offer the following observations from my own meandering experience.  Wasps preying on spiders is the only instance I know of where a terrestial predator preys upon another; however it happens in the sea a lot.  Nonetheless, mostly to reduce the risk to themselves, predators don't usually prey on others.  But this is a film, so meh.

On to the defining part of predation.  The predator eats the prey. There, that's it. The rest of the prey animals flee the apex predator.  Now there are exceptions here; lions and hyenas might fight but usually break off if they find themselves loosing.  It would have to be a particularly harsh set of circumstances that result in a fight to the death.  So if what we see in this film is supposed to be a lion and hyenas, why bang on about apex predators so much ?  It just leads to the expectation that Godzilla wants to eat the MUTO.   And if it is for territorial dominance (and therefore access to resources) where is the conflict ?  MUTOs eat nuclear missiles and Godzilla doesn't eat, so what are they fighting over ?

Sorry for this, but that much worse film, Pacific Rim, which, lets face it, was awful, actually had a much, much better raison d'etre. 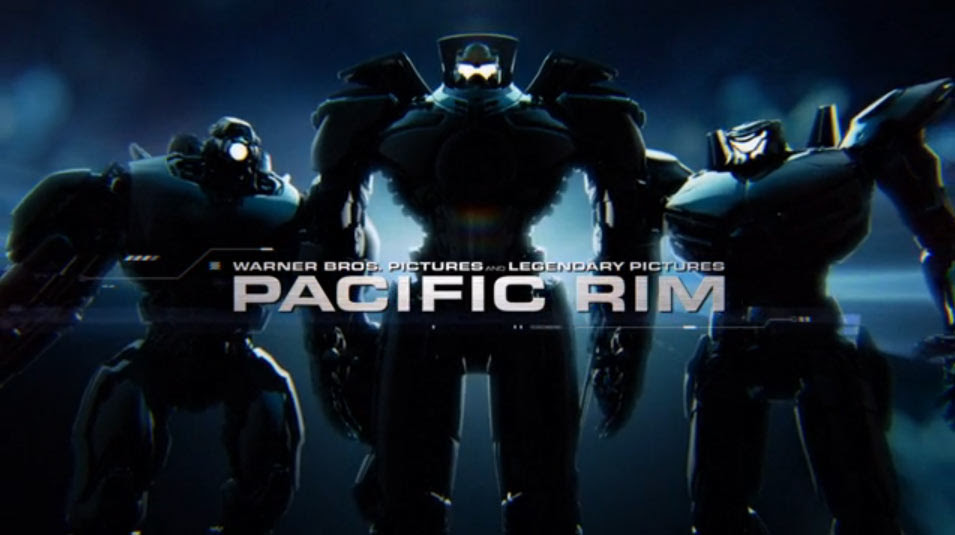 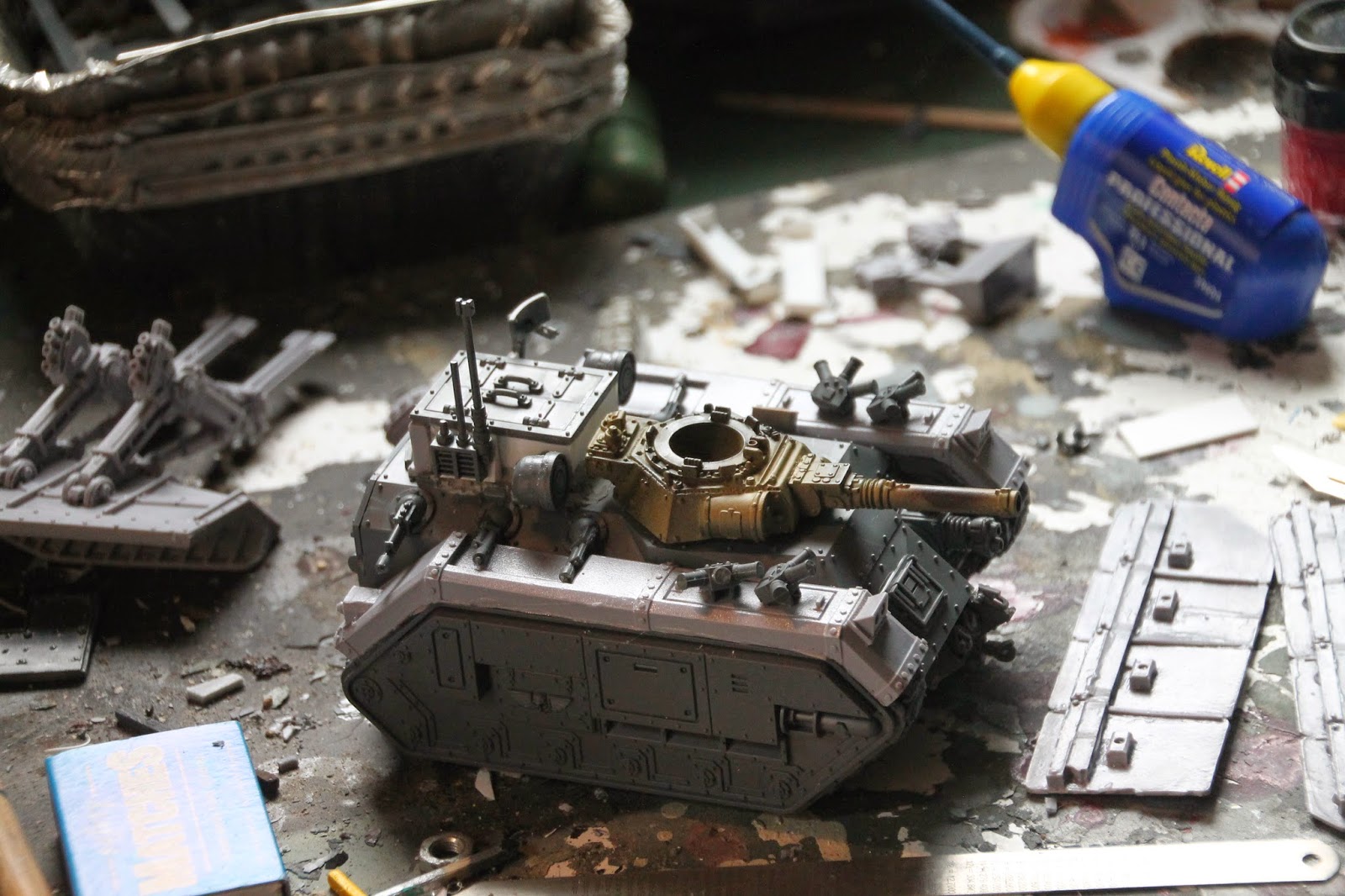 This (as they say in all the good modelling comics) shows the multi-media nature of the kit. The big things here are that this will be the only forward turret chimera in the DKK fleet.  The obvious reason for this is the extension of the top hatch, like a dormobile roof on a VW camper van.  This extension would look better if it was a little lower - just under the height of the turret, rather than just over. 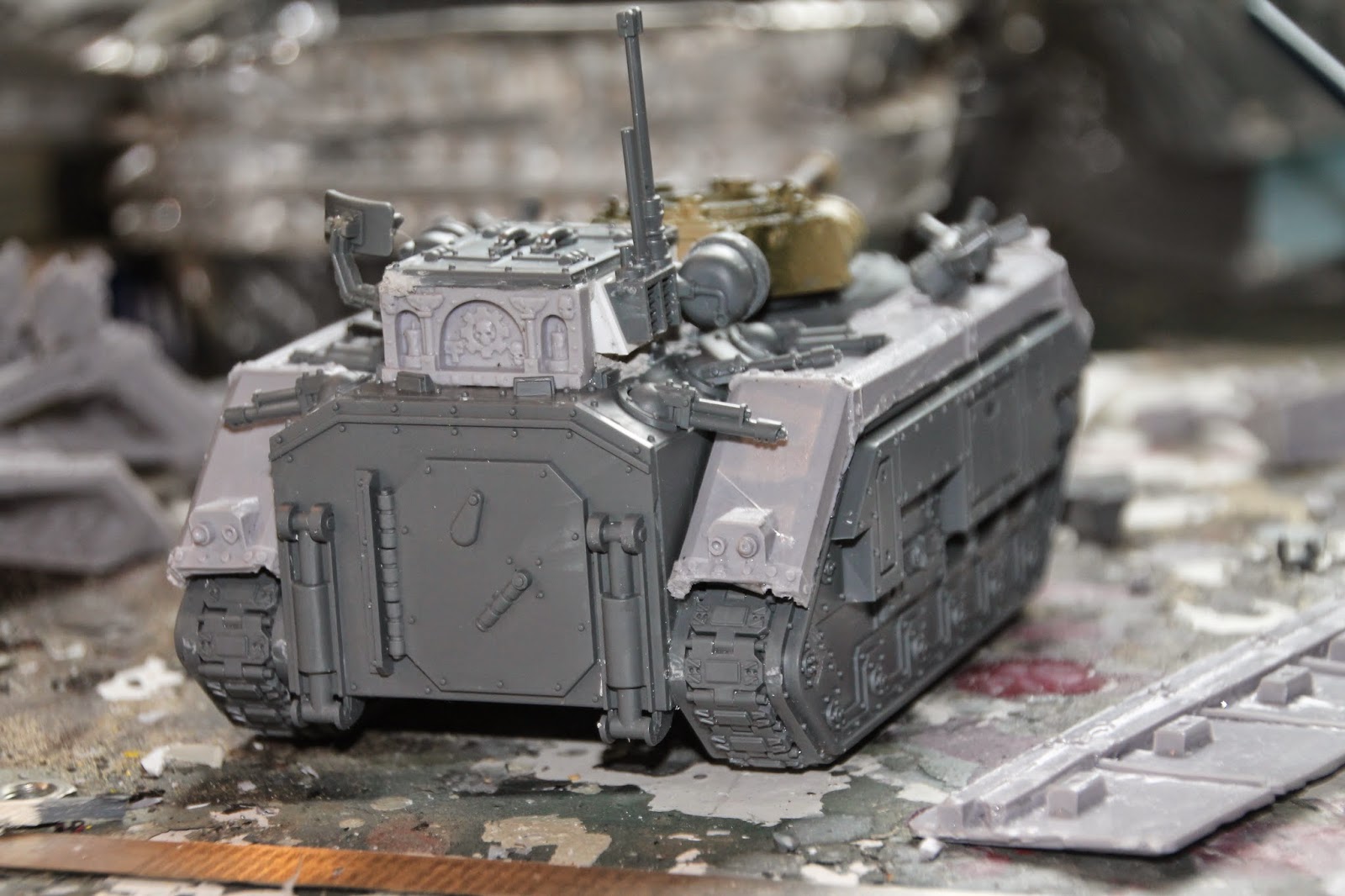 The reason for the height of the extension is the inclusion of this mechanicum shrine (from a titan kit), which I wanted to include in this engineer's vehicle.  There are two task lights (not spot lights - spot lights are for spotting things, these task lights are for illuminating the tasks that the engineers are carrying out) and some comms kit on the extension - I'm quite pleased with the chamfered box for the non straight mounted antennae.  Watch out Claus, I'm coming for your crown. 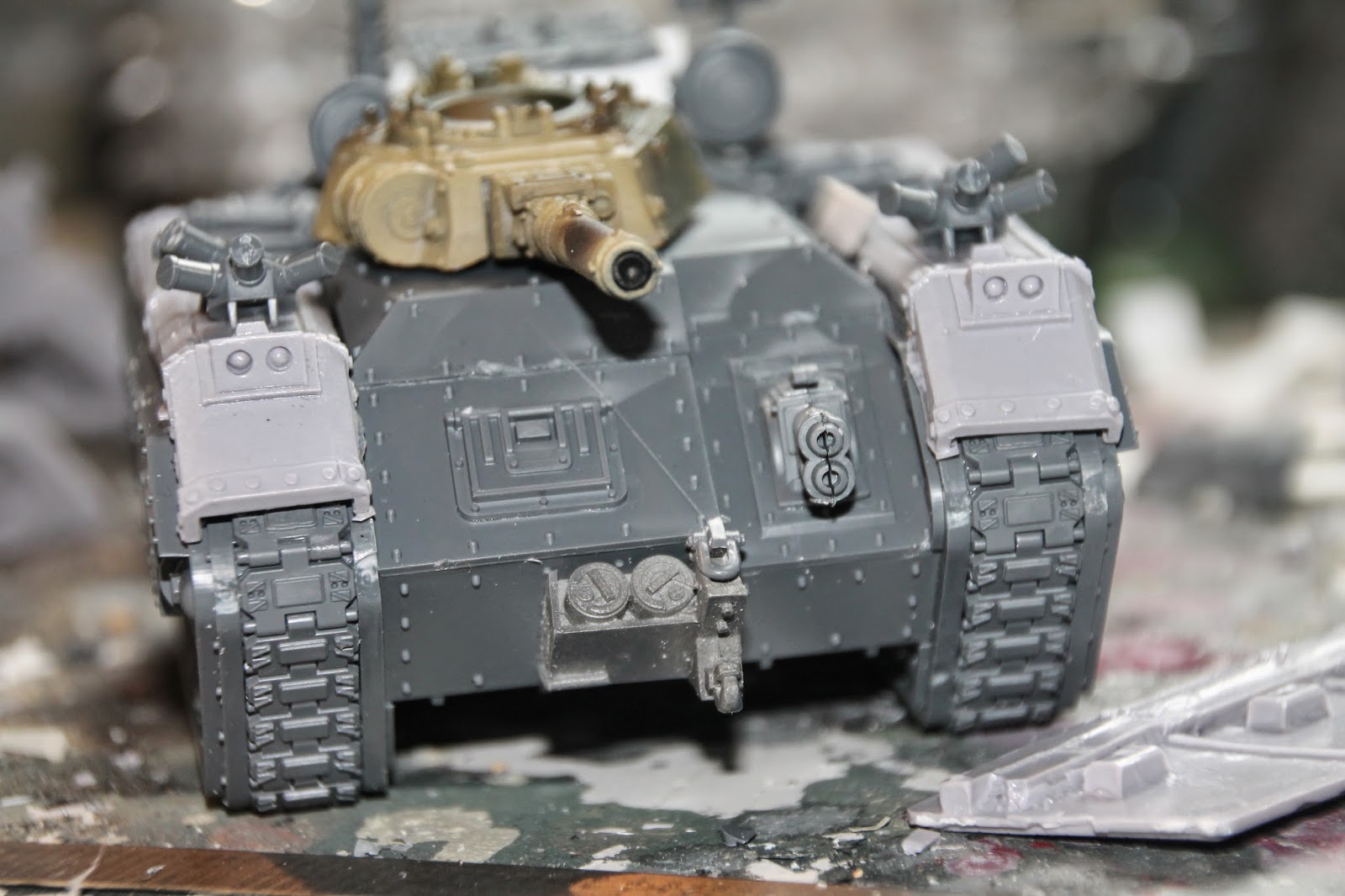 Yes it has double smoke dischargers.  No, there is no in game advantage, however, as a ride for combat engineers, it will have to make it's own way across the battlefield and the extra smoke would seem like a no-brainer. 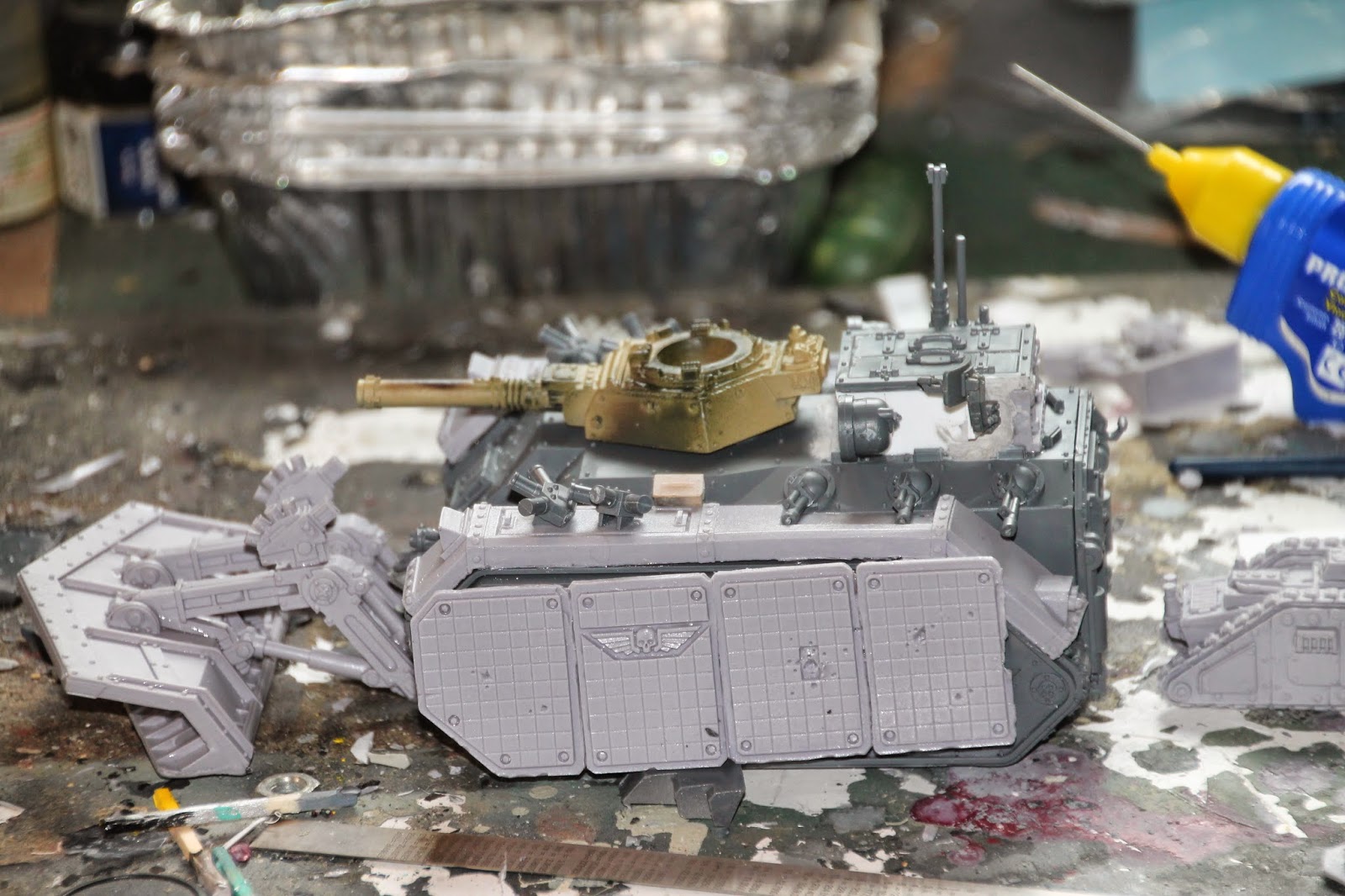 And this is it with the mine plow and skirts.  They are not fixed yet - I'm still looking at options to fix these items.  Yes, that is a goliath motorised bomb you can see behind - just the thing that every DKK combat engineer squad wants to share their chimera with.
Posted by Zzzzzz at 10:47 7 comments:

I have a fight coming up.  In July.  I have reason to believe that the other three players are fielding, respectively, Tau, Eldar and Guard.  So I've narrowed down my choices to:

Templars. Nothing says 'Pleased to meet you' like a violent purge. But I don't have the new SM Codex, which could be a bit of a bind. 4th Ed army list an' all that. 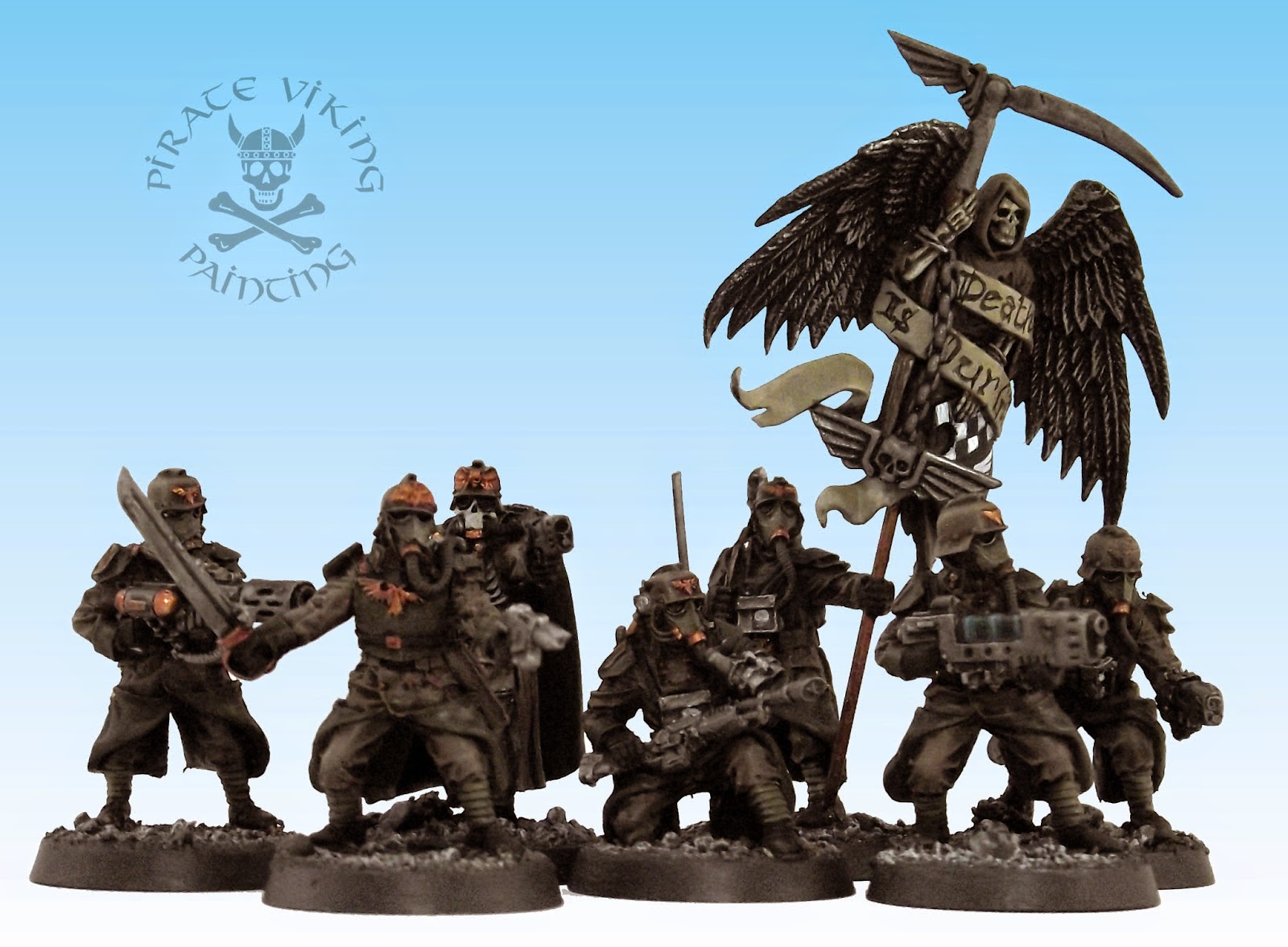 Death Korps.  IA, so no worries about the codex.  And they are fab.  And they don't get out much. 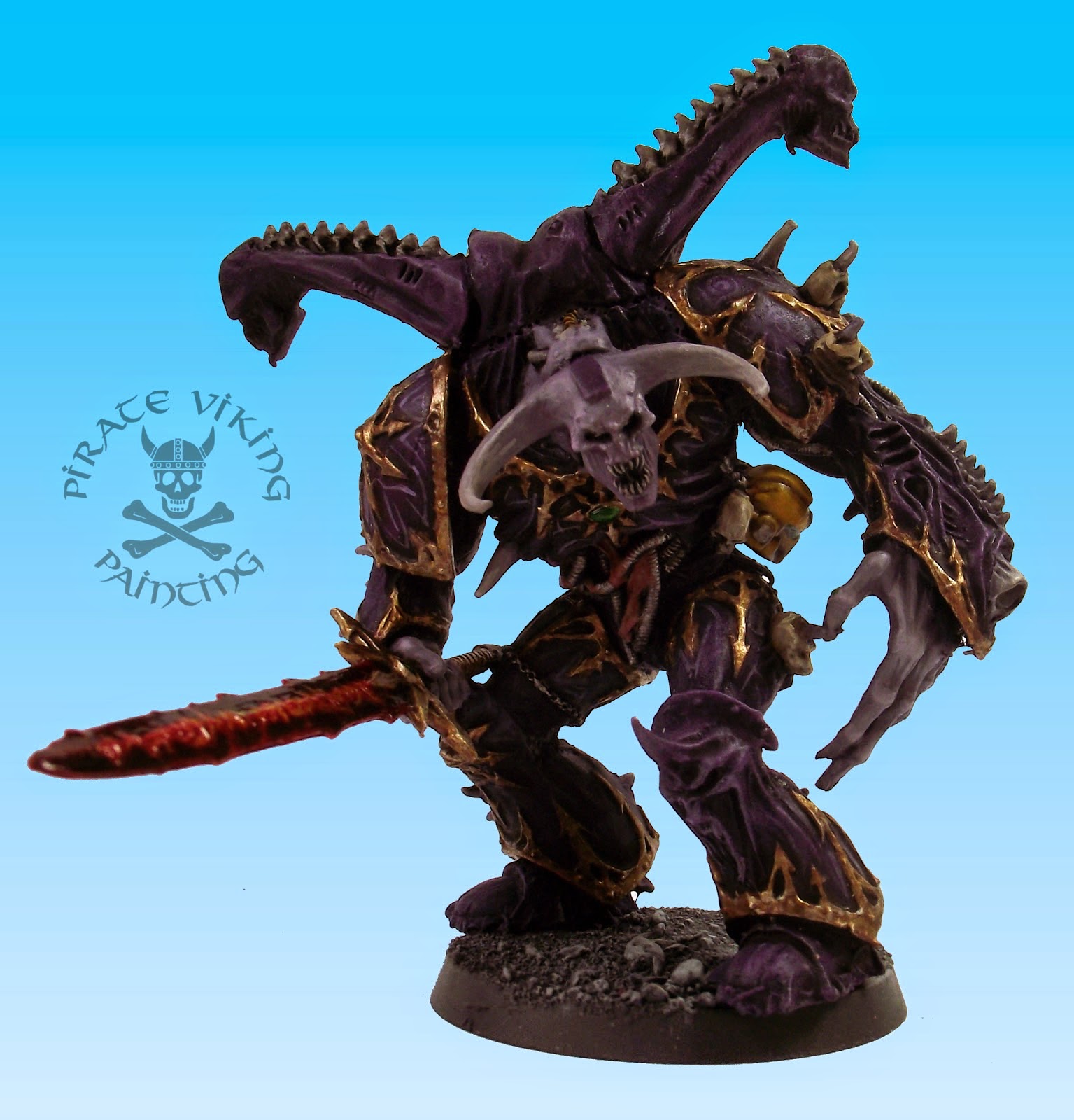 CSM.  Purple armoured spearhead with twiddly bits and deamonettes.  Plus blobs of 'zerkers and termizerkers and bargin bucket of cultists.  Humm, I think this option has legs. 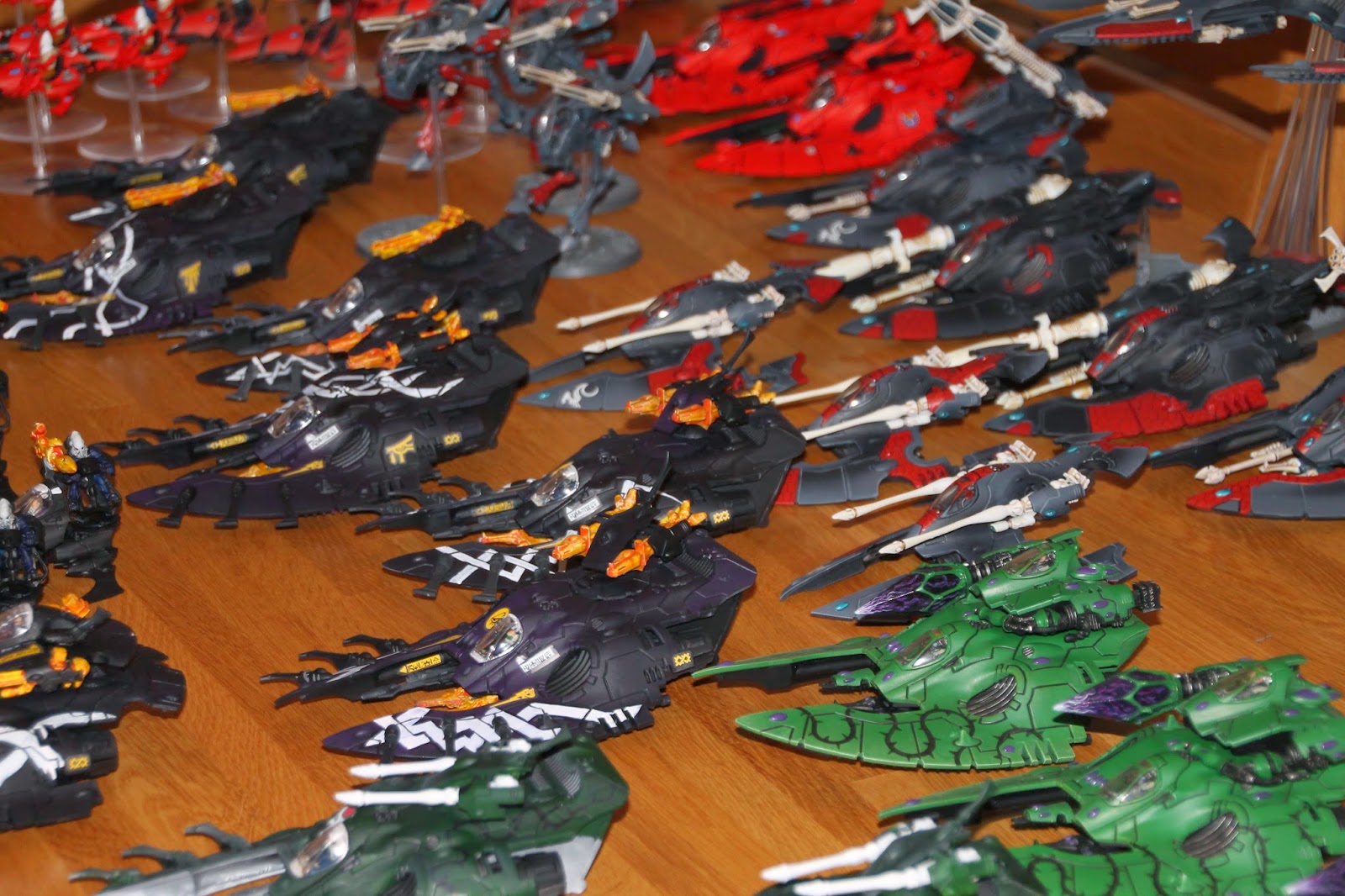 And Eldar.  Best results (for me) with these and I really want to throw the corsairs on the table.

Now, I suspect, if you're reading this, your heart has already decided and you would take the DKK.  But suspend disbelief for a moment, who else would you take ?  No matter how purile your reason, I'd like to know.  Cheers !

Here we go again:  It has been six months since the last reckoning. I'm concious of the fact that Col Scipio has said he's going to hold me to account, so hopefully the avalanche of work completed is seriously denting this list now...