This is an Eisenkarn head, FW body and (I think) Anvil legs. 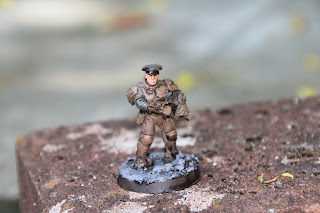 I shied away from trying to put a red band around his cap, but I'm reasonably pleased with him 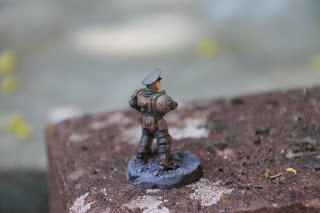 Tactical colouring on his Canadian Gate and a silver aqilla honour badge. He needs his base tidying up. 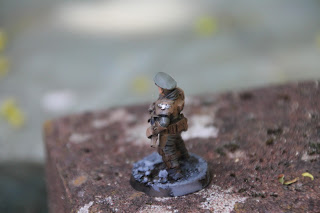 Next up on the Brick of Scrutiny is another officer made entirely from GW plastic bits. Painted at the time (ie as part of a batch), with the same amount of work. 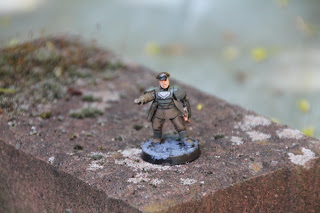 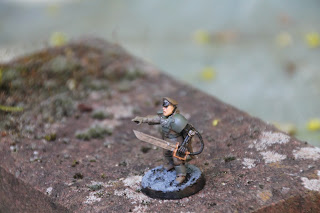 From the amount of work, I'd hoped he'd be a bit more interesting. 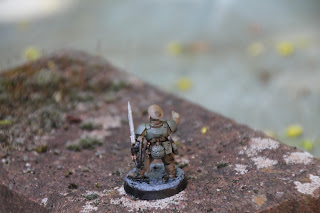 Yep, he's fine.  Is it just me or does the other guy look better ? 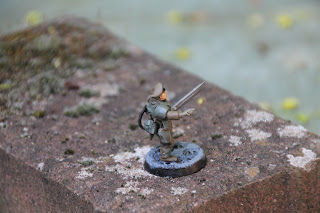 So you'll recall the virtual annihilation of the Llar 4th Heavy Infantry in their ill fated, poorly planned, virtually unsupported attack on the eastern side of Xyphonica.   Well, 80% casualties anyway. 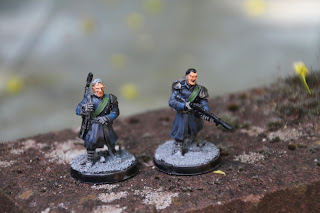 Two of the survivors.  I have tried to capture their silvery shoulder guards and shiny buttons.  These two have lost their plumed silver helmets, possibly why they survived. 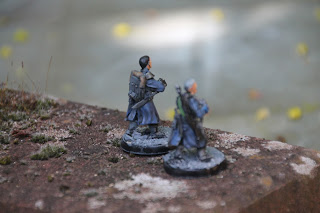 They've come out a little better than the internal security goons, barring my attempts to give the black haired guy a natty 'tache. 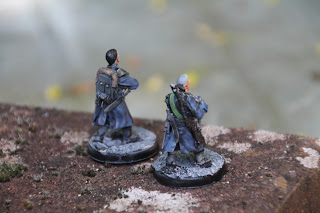 From the brick of scrutiny... 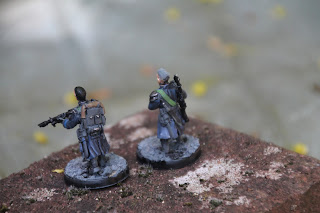 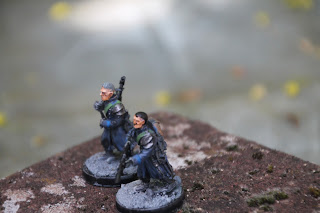 These are Anvil Industries figures - on the brick of scrutiny as I didn't intend to do anything more with them.  (I've put them away already).  But photography in daylight shows up some defects which I didn't spot in the soft mood lighting which I'm painting in atm. 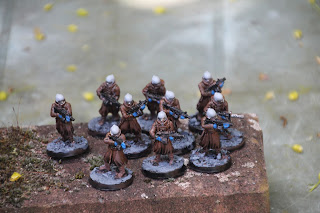 Some of the people I work with use blue cut proof gloves.  Threw one on, more or less on a whim and decided that it looked OK and provided a point of visual interest.  But there's splodges where the blue is on the firearms and then there's grey on some boots which is way too much to be dust from the ground they're walking over. 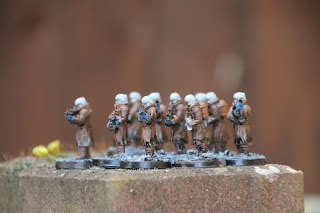 and there's a couple of visors which are a bit sloppy.  And the camera has made the washes look a bit harsh at the hem of the trench coats, I was aiming for leather(y). 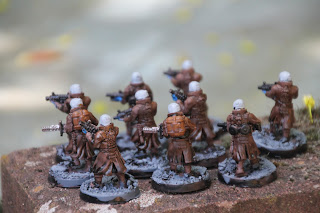 Aside from all that, they'll make for a decent bunch internal security types for some mover or shaker somewhere mid hive in the Grim Dark of the far future.
Posted by Zzzzzz at 22:02 6 comments:

I bought this (actually from Banbury GW) for a holiday read.  But then Mrs Zzzzzz stole 'Arthur' which was the next book I was going to read and so I picked up the trashy holiday read.

Were I a BL author and they said "We want a Space Marine book and its...." my heart would sink. How to make one dimensional post human super warriors interesting ?  Like Dai says, there's a lot of stuff out there which is little better than fanboi fan-lit.

Robbie MacNiven has my admiration.  His portrayal of both the Night Lords and the Carcharodons is considered and true to the fluff.  But both sides are still recognisable space marines.  And the 'tithe' aspect, the main (only) plot driver is not only explicable, but more or less demanded by the fluff.

So nothing phenomenally way out happens.  The story unfolds in not unexpected way, but is nicely paced and references all of the right things to make you give that internal nod  -  the author knows his subject, so when he takes poetic licence to make (what is in a 40K game a simple mechanic) things happen, one allows it to happen in that way (ie captured psykers still taking an active part in events).

I spent £18 on this, because I wanted to have the hardback to whack the small people with when they try to tip my lounger into the pool.  The ebook is probably worth the money.  If Robbie MacNiven is allowed to write about anything other than Space Marines, I might be inclined to have a look at it.
Posted by Zzzzzz at 22:27 3 comments: