OK,  So this is a years progress ploughing into the plastic crack mountain.  The rules were no expenditure unless it was to finish off a part of one of the projects, ie two predators to complete the Black Templars was allowable and entirely within the rules.

Violations include two knights, because how was I to know that GW'd release giant killer robots (?!). And an Elysian Army, which was a speculative punt on ebay that I didn't think would win.

All that aside, the list is now split into two parts, one of which will disappear next year.  I think that once again, an undertaking not to start new project-ettes will be the way to go next year.  There's still loadsa work on the second part of this list that still needs doing.

I just hope that the progress made this year meets with Col Scipio's approval (?)

Without further ado, then.  Done :


DKK Salamanders - need finishing off. Slow extra steps taken + more !Valhallans (need paint) Done !  Need a major basing event, though. Based.
3rd Thunderer Conversion.  (Then all three would be ready for paint) No Progress Two under and base coated.
Additional Officers (Not Imperial - just a pile of parts at the mo') Now assembled.  I've started painting them.
"Word Bearers" er, um, tbc.
Leviathan Mortis' - need construction, conversion and paint. No Progress
DKK Grenadiers (lost children of another army....you guessed it, in a box.) No Progress but new legs bought for conversions.
Full Size ATAT fleet (need assembly, conversion and painting) No Progress
DKK Hydrae (Always keep six spare Chimerae kits waiting; need assembly and painting) Admiral Drax popped by and assembled two of them for me.  He's gonna build the other four as well !
Thunderbolts - Jeager Gruppe 52 decals purchased. Karitas popped by and assembled one and has taken the other away to assemble.
Clone wars Vendetta conversions  Vendetta Kits purchased.  Fans needed for engines.
World Eaters Land Raider
Meridian Infantry
TGG Kickstarter girls
And then a trawl of what's left in the boxes. -
Other KS stuff that's due to arrive

So then, that's it for 2014.  Let's see how much more I can get done next year.  So for the first week of next year, I'll put up some of this year's reinforcements - nothing I've not put up before, but who doesn't like pictures of iggies ?
Posted by Zzzzzz at 12:31 3 comments:

The end of times.

Anyway, the author is pulling the plug, quitting whilst he is still ahead, as it were.

With so many of us quitting 40K for FoW, Starwars and 30K, it really does look like the end of times.

Oh well. it's only a hobby. 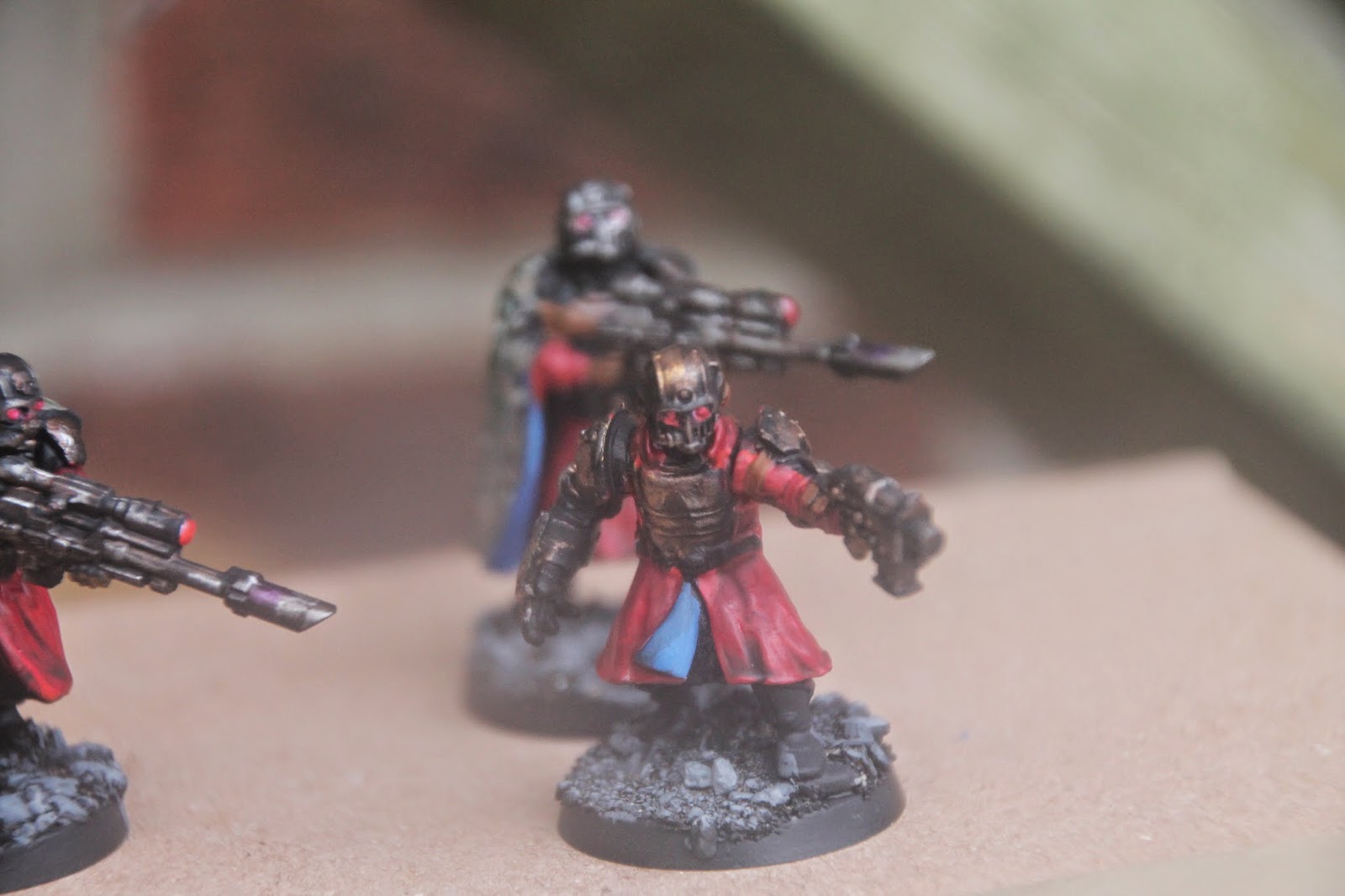 So, these fellows are supposed to be some sort of elite within the Devos IV PDF's 99th Infantry Regt.  Hence the power fist and bolt pistol guy leading two long-las and camelioline sharpshooters. 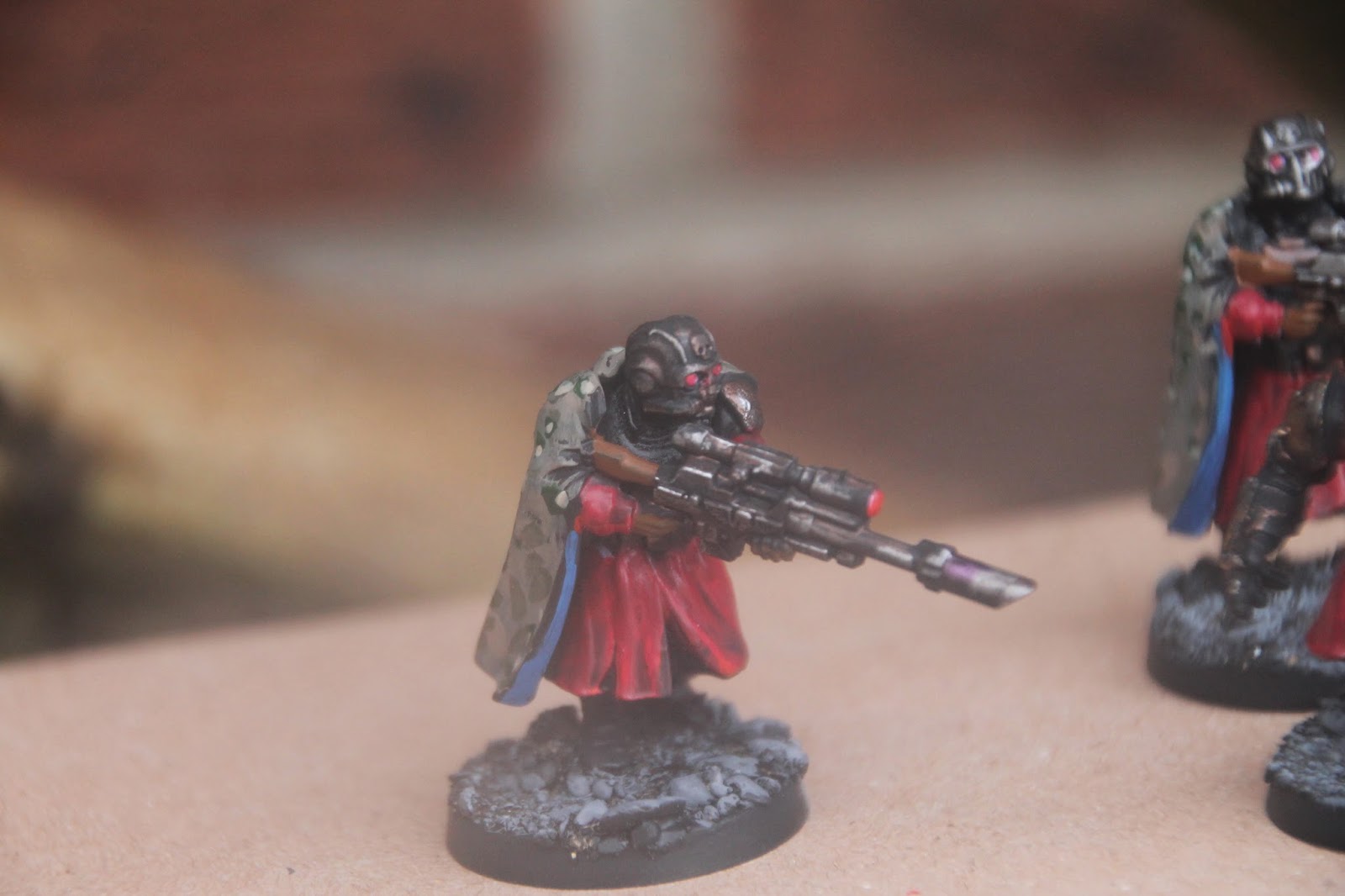 I think these boys have come out slightly better than the officers but are still not quite up to scratch.  I do enjoy the overall effect these guys have, but things like the paint discipline fail where their arms meet the cloak lining is somewhat vexing.  Now, I may have made a rod for my own back choosing the comparatively bright blue, but nonetheless, should have been able to spot and fix that before packing the whole lot away. 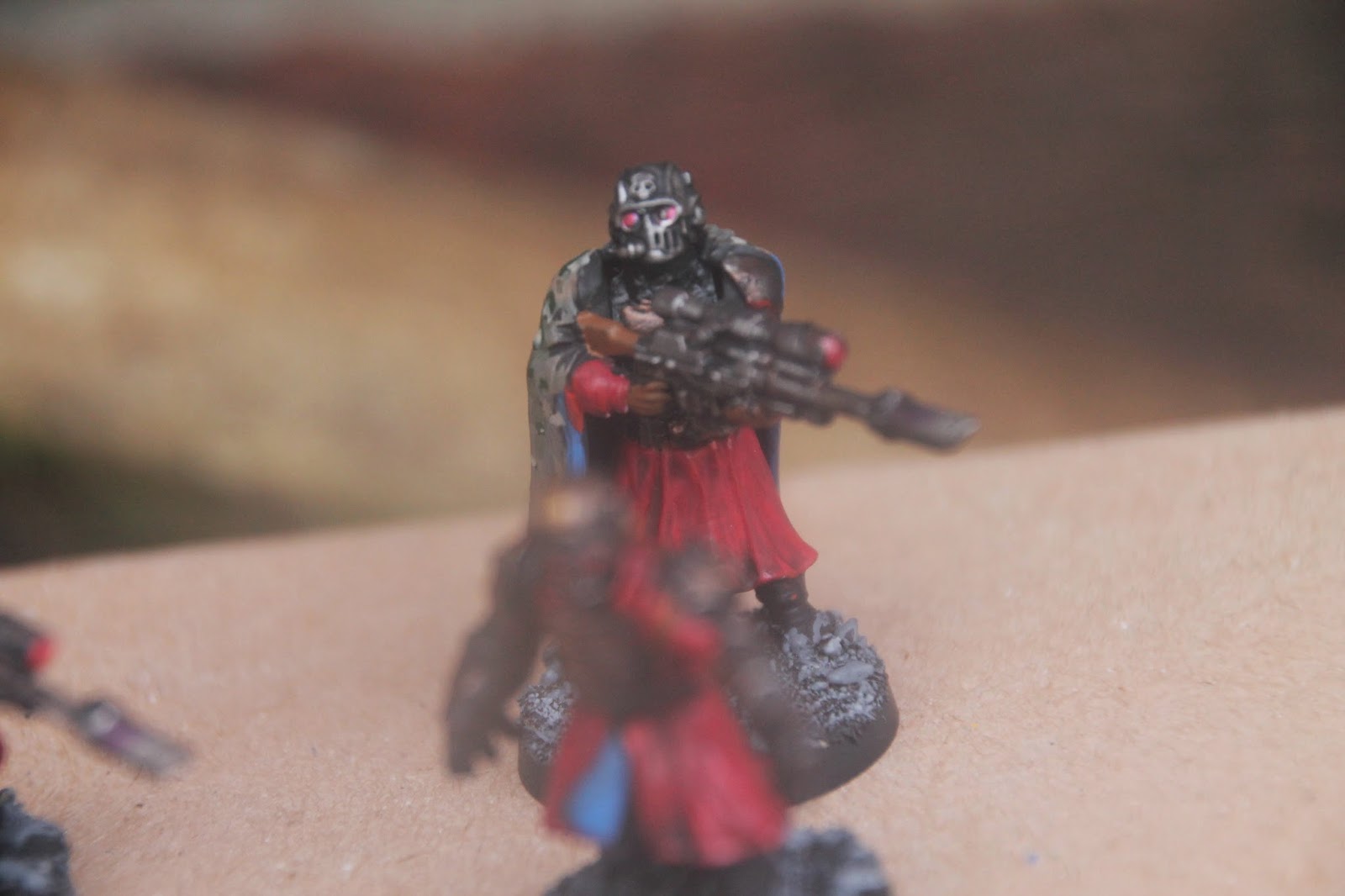 Now I've pointed it out, you see it every time, don't you ? tsk. 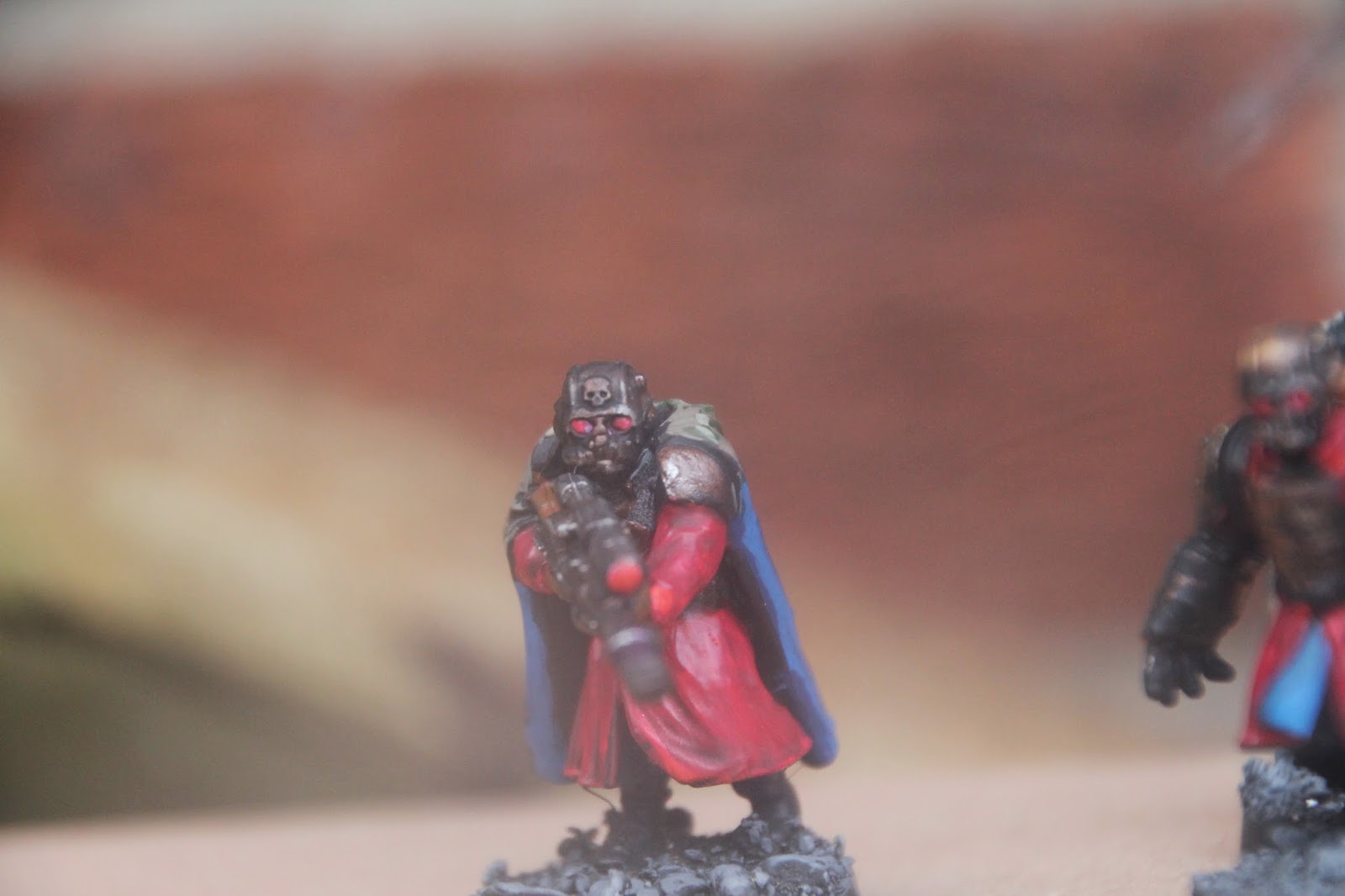 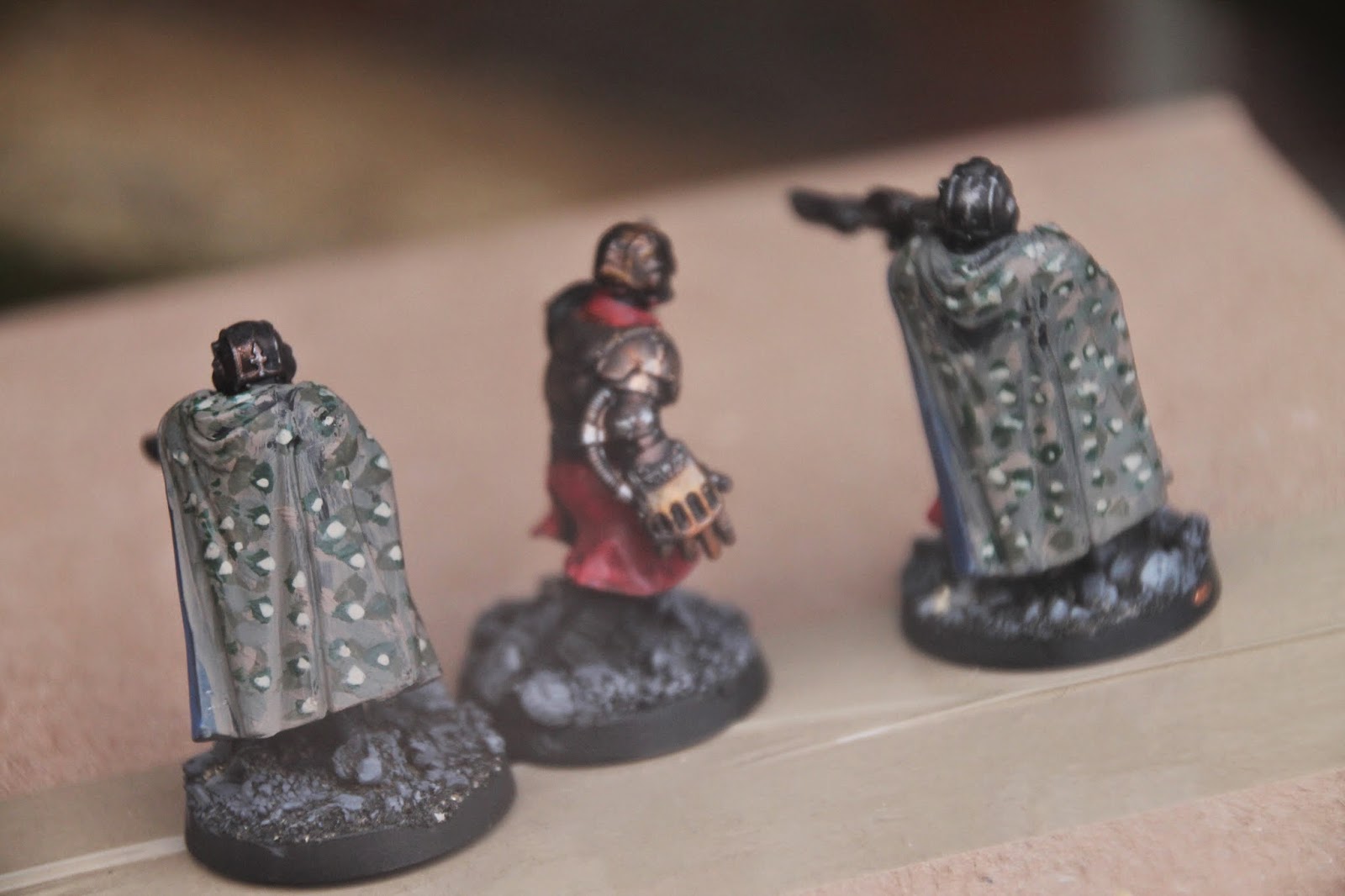 And the camo on the cloaks worked OK as well. 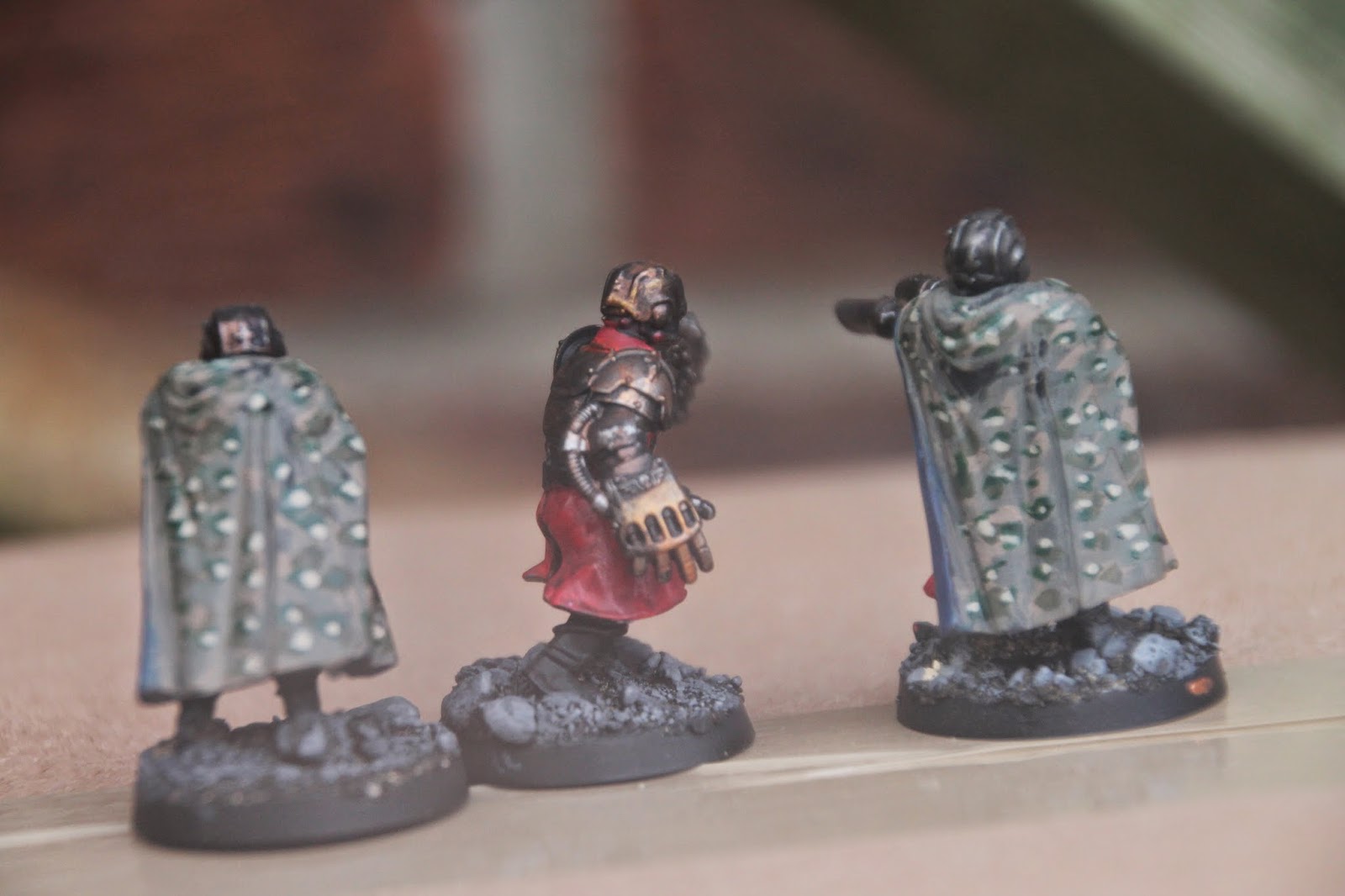 That's quite possibly it until the annual round up, thanks for watching...
Posted by Zzzzzz at 17:16 3 comments:

I hope you're sitting down, because I've painted something. 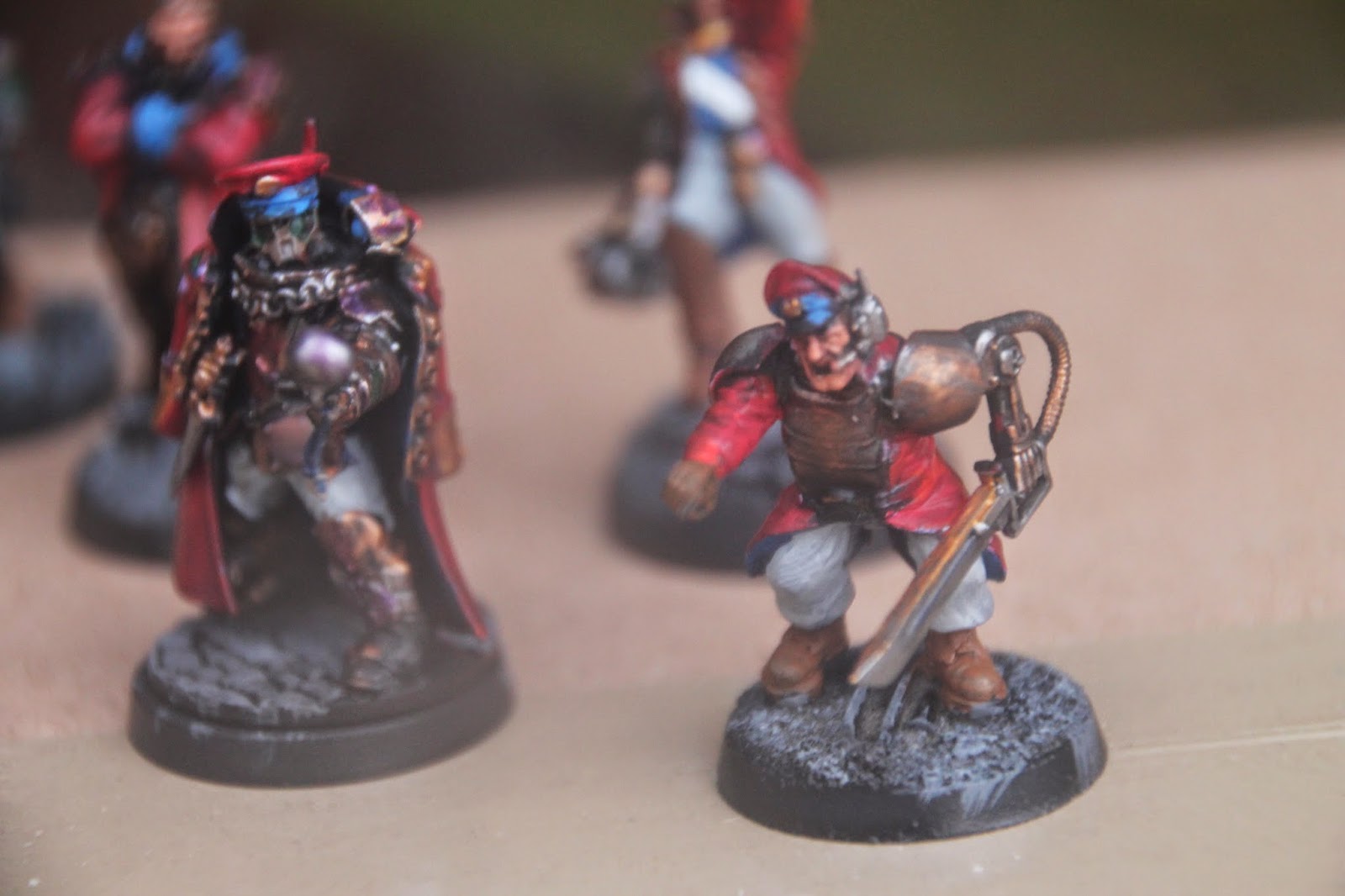 I threw some paint at the Bloodcoat Officers.  And I suppose that as this represents progress, I ought to share.  However, there are somethings that I'm not overly enamored with, so here we go; 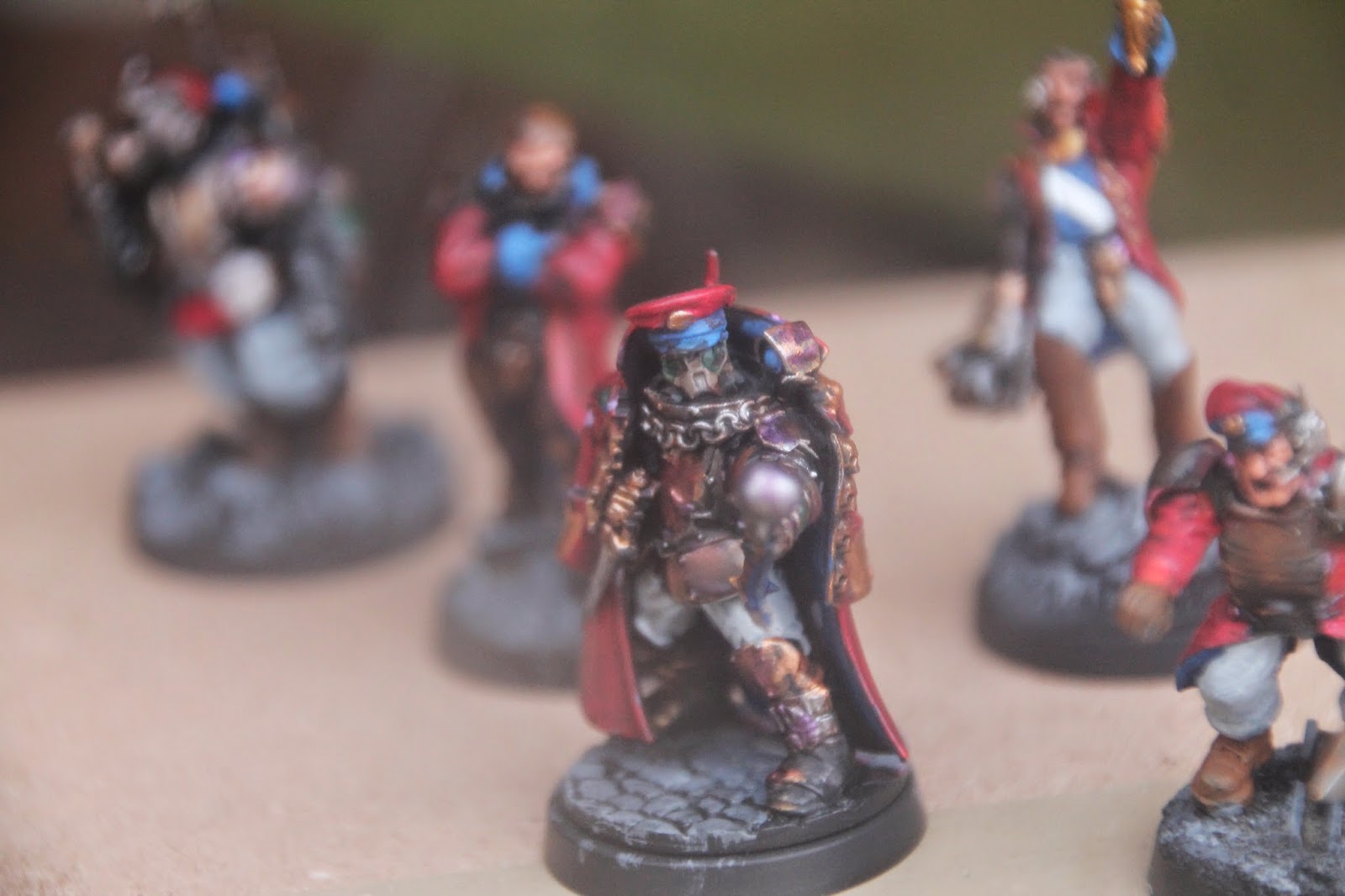 These guys look fine for TT.  Viewed from 4' away, they blend in nicely with the rest of the army - job done, we it were.  Now the fellow in the Scion overcoat is General Horpan ('Danny Bloodcoat' to his men).  Mostly happy, but there's bits where my  paint discipline has failed and the result is messy and untidy.  Especially in close up photos - possibly more so than IRL. 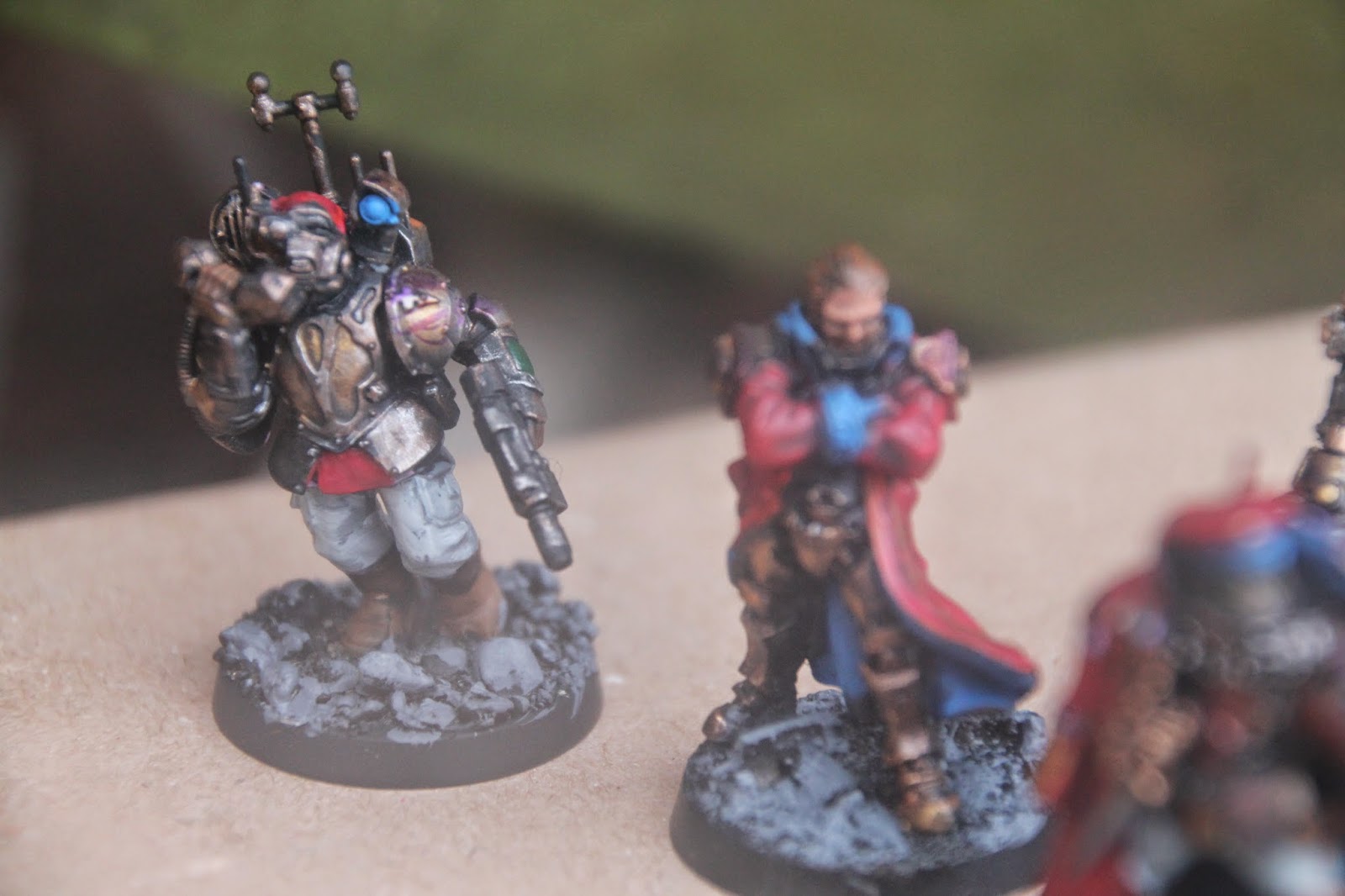 The effect on the vox-op's armour I am happy with, a tick that success. 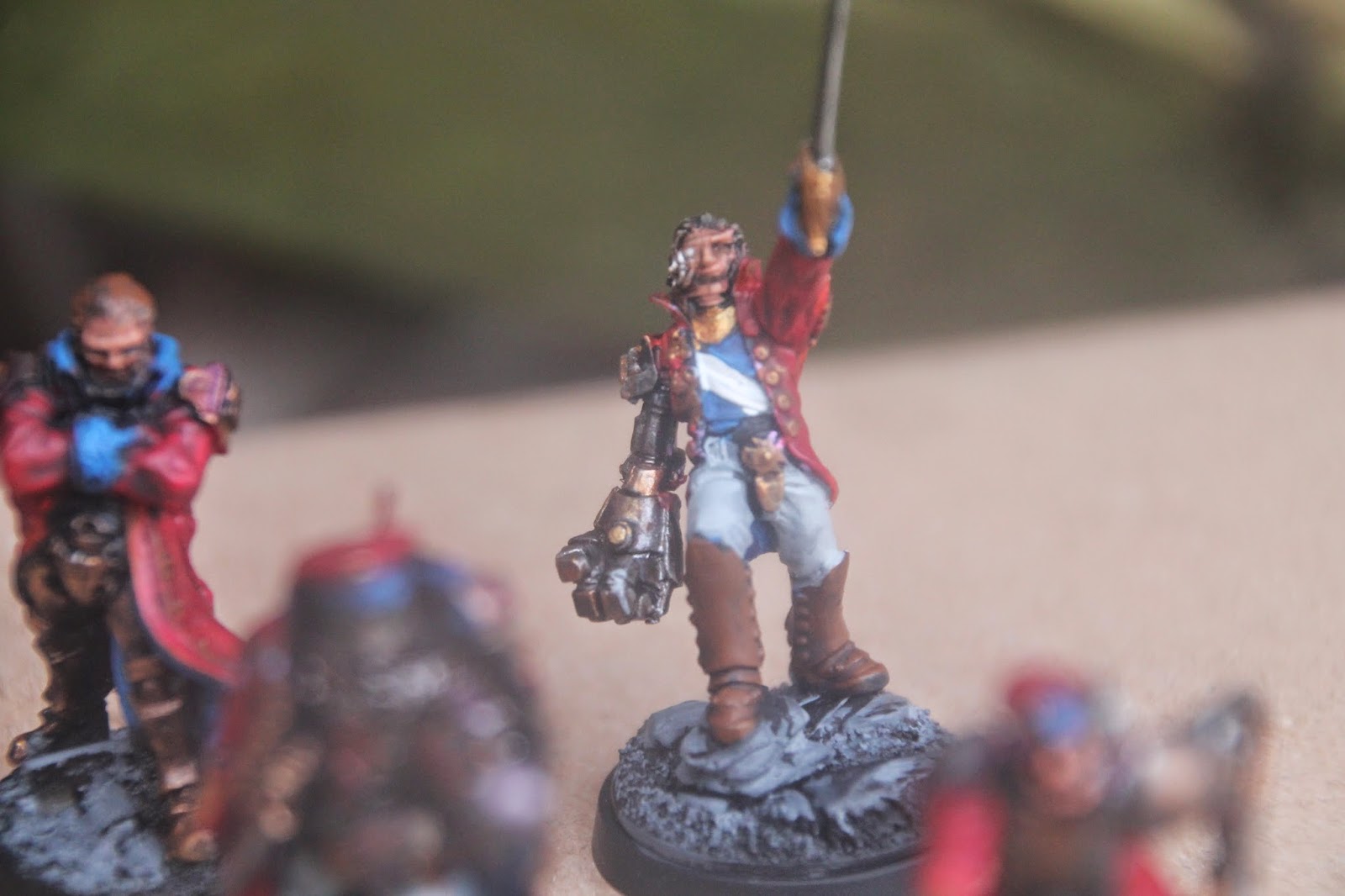 Nelson X's sash is a bit meh, having spread to his shirt in two places.  And the colour changes on his big brown boots are a little too subtle. 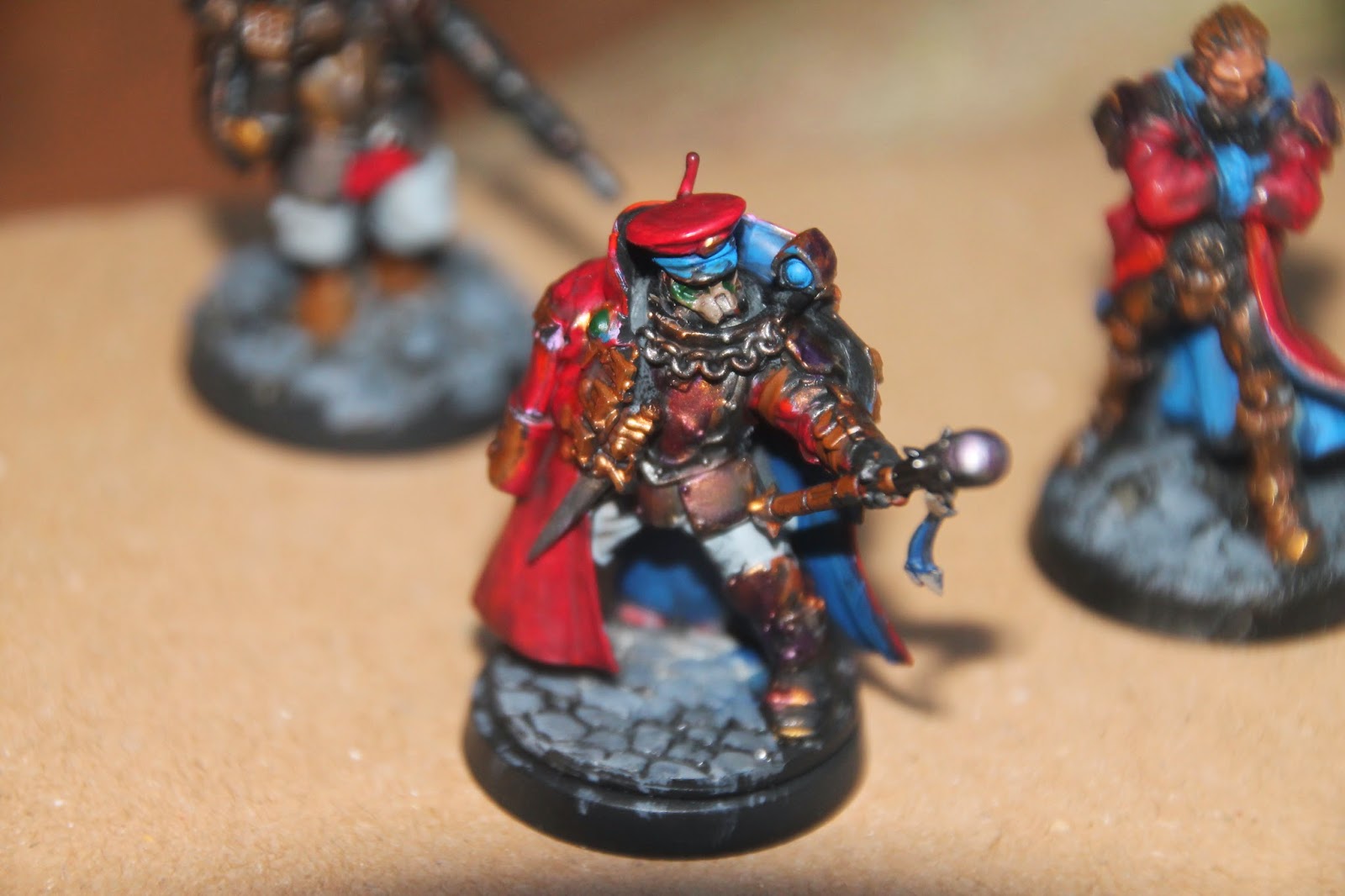 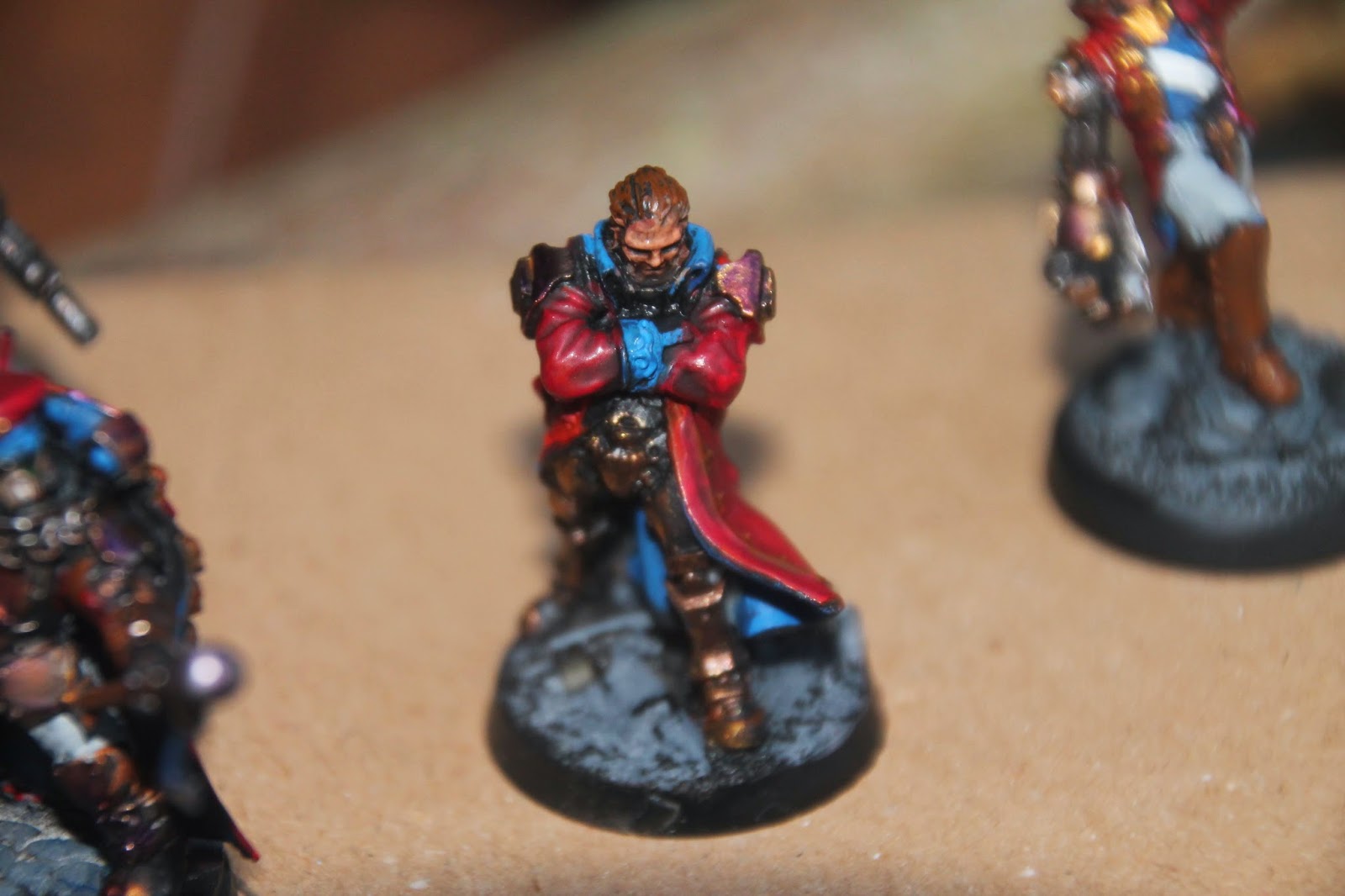 There's detail on Tacticae Napoleon's cuffs that's not been picked out (probably because I couldn't see it when I was actually doing the painting) but at least his hair and face came out better than Nelson X's.

Over all, as these guys will spend most of their lives in an army case and I'm not out to win prizes, these are OK for the time being.  They are now packed away for the winter anyways.  Hopefully, by the time spring comes 'round again, I'll a) remember what the improvements are and b) be bothered to do them.

Another couple of painted figures (same woes though) in a couple of days.

Mr. Pie Ramblings: "I hear they sung...": I recently responded to a Facebook thing about “'five albums that made me what I am”. Obviously, it was hard to narrow it down to j...

OK, now you need to know that 'Mr Pie' here is a friend of some 40 years; one of the four Apoc Generals, no less.  Someone asked him a question about "Five Albums That Made Me What I Am".  Most of the time our discussions about music centre around his penchant for "industrial grind" the type of thing Abnett refers to as 'Pound'.

Anyway, I was thinking about music that means something to be and it occurred to me that lots of music does affect me, emotionally (which is the point of music, n'est pas ?), but it almost either has a very strong context of its own in the first place or has a strong context for me, personally.

An obvious example is the last post.  I've been one of the quarter guard, arms reversed, around Dunstable war memorial on Remembrance Day.  As a youngster I did it in scout uniform, freezing my young arse off, often in the pissing rain, but I got it, even at eleven years old.  Being there 'for real' was more about getting the unfamiliar rifle drill right.  Now I don't do that anymore, it's more about a personal act of remembrance for me.  So, yeah, the last post is piece of music that can stop me from doing something.

But that came to mind after this;

I wanted to mention as well the closing theme to Dads Army.  It was a superb comedy, but it did always have an edge to it.  That edge was the Warmington on Sea Platoon of the Home Guard conducting something in between a bayonet charge and a more tactical 'advance to contact'.  If you watch it without the sound it might strike you as another bit of farce, in the vein of the episode.

But with the attendant sound track, what you have is a last ditch defence of a beloved homeland, England's Volkstrum.  A bunch of retirement age soldiers, most of whom had already served their time in the trenches thirty years before, once again taking up arms.  We see them advancing through a bombardment (albeit simulated) and the camera fades to the sound of the air raid siren - an eerie and penetrating noise my parents grew up with.  And of course the sequence ends without us really knowing if it was an exercise - of course it was !  Wasn't it ? - surely the whole point of the home guard was that these men were, once again, in most cases, putting themselves in harms way (to use a modern phrase).

Anyway, the closing credits of Dads Army, strange though it may seem, is another piece of music that resonates with me.

There are other non-military pieces that also  touch something here, (the theme to game of thrones is exciting) but I thought someone out there might find this vaguely interesting.
Posted by Zzzzzz at 20:53 No comments:

I've just been for a nice cup of tea with The Responsible One at a chain coffee emporium between Marylebone and Baker Street.

We had a nice chat (he's quite good at it) for about an hour on house prices, job security and the concentric rings of cost of houses, which is centered on W1 somewhere.

And amongst the other things that cropped up on the periphery, kickstarters, sources of mid-eighties citadel metals, 40K LARP (no, really, I've seen the picts.  But Aberdeen ? Really ?!?!).  And of course struggling through one's plastic crack mountain.

Anyway, the point of this post is that it is a marker, an aide memoire for me; I have some Chimera parts to locate somewhere in the garage.  I will let you all know when I find them and hopefully at some point in the grim darkness of the far future, The Responsible One will show us their eventual employment.

And here's a not - tank.  'cause tanks are festive.  Well, in winter 'flage at least. 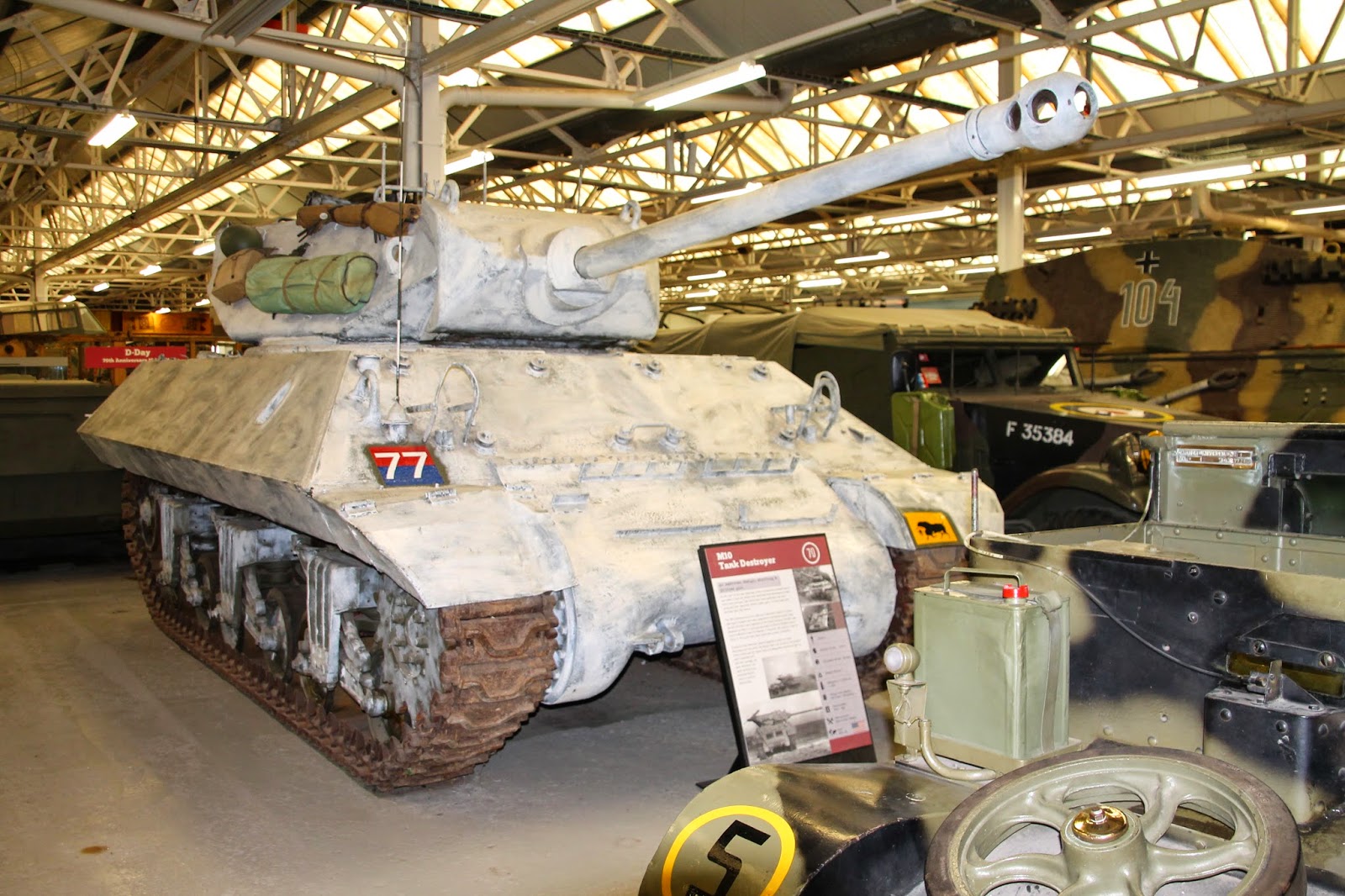