You may remember me saying that this guy, the furious charging BT Terminator without a helmet: 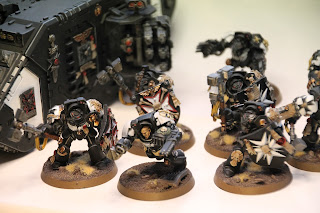 He was modified by a guy I used to work with, who also sculpted his head.

He now has a blog detailing his sculpting exploits:

And a new 'site as well:

This is one of his.  He does commissions !  and not just fantasy/SF 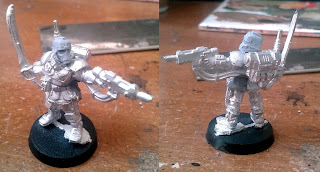 There is projecty stuff going on.  I'm hoping to have something to show you soon.

But in the meantime, continuing the theme of non-hobby stuff, I offer you this:

And looking at other people's projects:

Reasons Beer is good for you.

1. It keeps your heart healthy

While glugging wine might be the boozy pasttime that we associate with decreasing cardiovascular disease risk, beer may be just as heart-healthy a beverage. Research has found that moderate beer drinkers have a 42 per cent lower risk of heart disease compared to non-drinkers. Although it’s good to note that the researchers suggest keeping consumption to one pint - at around 5 per cent alcohol by volume - a day.

2. It can make you live longer

It’s not the elixir of life, but Virginia Tech researchers found that regular, moderate beer drinkers were 19 per cent less likely to die during a given time period than people who never touch a drop. Well, there’s a good enough reason than any to toast to your health.

3. It can get your creative juices flowing

There’s a reason why you do your best thinking after you’ve polished off a pint. According to a study in the journal Consciousness and Cognition, knocking back a beer or two can boost your creativity. When 40 men watched a movie while completing verbal puzzles, beer-drinking blokes with a blood alcohol content of .075 solved the problems a few seconds faster than their sober counterparts.

4. It can protect you from Alzhiemer's

Short-term memory loss during consumption aside, a recent study found Xanthohumol, a compound in the hops used to flavour beer, is able to protect the brain from degenerative disorders, such as Alzheimer’s and Parkinson’s.


5. It can give you stronger bones

Conscientiously objecting to buying a pint of milk? A 2009 study concluded that the elevated levels of silicon in beer can contribute to higher bone density.

6. It has fewer calories than skimmed milk or orange juice

Here’s one reason why you shouldn’t feel guilty for a having a pint for breakfast while on holiday -  Guinness released statistics showing that its heavy stout is lower in calories than both OJ and skimmed milk.

7. It can prevent type 2 diabetes

Dutch researchers analysed 38,000 male health professionals and found that when men who weren't big drinkers began drinking moderately over 4 years, they were significantly less likely to be diagnosed with type 2 diabetes. However, that doesn’t mean you should order in a ten pint round - researchers found that, increased alcohol consumption over time didn't lower the risk in men who already had a couple drinks a day, so moderation is the key.
Posted by Zzzzzz at 10:44 4 comments:

So, thinking about putting things up on the blog, this is just for fun.  Please don't write the answers in the comments, just your score before you had to look anything up.  Now updated with the answers.


1.   Operation Tonga was the airborne assault phase of which larger operation ?  Overlord

2.  Aircraft belonging to what organisation made the first confirmed fighter kill of WW2 ?  FAA

3.  Aircraft belonging to what organisation made the last confirmed fighter kill of WW2 ? FAA

4.  What was Midas Betancore’s job?  Inquisitorial henchman and pilot

6.  What is a Sverdlov ?  Cold War era Soviet destroyer

7.  Homeworld of the Imperial Guard’s only Thunderbolt unit in the Sabbat Crusade ?  Phantine

9.  The name of the Royal Navy ship stolen by Jack Sparrow ?  Interceptor


11.  Which nation’s army contains the Winter Guard and the Widowmakers ?  Khador

13.  “White City” was a base of operations for which military formation ?  The Chindits

16.  British Infantry Regt wearing an additional badge on the rear of headdress ? For which battle ?  The Gloucester Regiment, The Battle of Alexandria 1801.

18.  What part of the UK was occupied during WW2 ?  The Channel Islands

19.  Corcorans were worn by whom ?  US Airborne forces in WW2

Potentially on their way here soon: 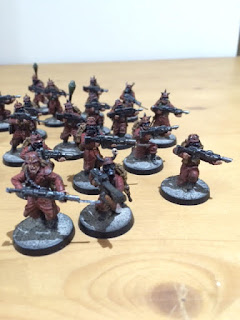 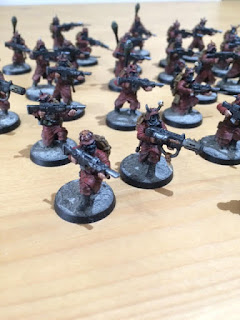 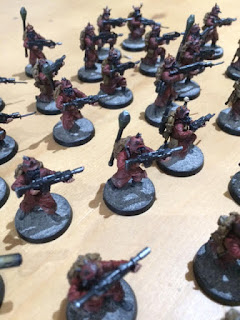 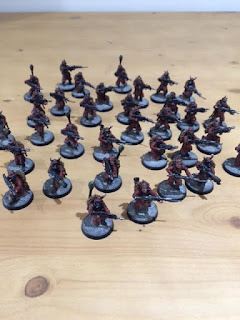 Paint by Siege Studios.  There's a video of these up on their fb page.  Curious construct renegade torsos, max mini heads, VL arms and legs, mostly GW weapons, either Secret Weapon or someone else's backpacks.

The second tranche will be a little more eclectic.  The plan for these includes three of the VL artillery pieces from the Bones KS.  And I'll cogitate about half tracks and other Blood Pact goodies from the Daniverse.  But all in line with the DKK Siege Regt list - they can be 'counts as', because reasons.
Posted by Zzzzzz at 21:46 4 comments:

Teeny tiny amounts of progress. And it's the not-millennium-falcon.

It's the summer holidays and I am up to my nuts in Peppa Pig and My Little Glue-beast. (No1 daughter now calls them 'coloured donkeys' when talking to me as I have started to not respond to their real name).

So "Progress" has been even slower than usual. But there has been some. 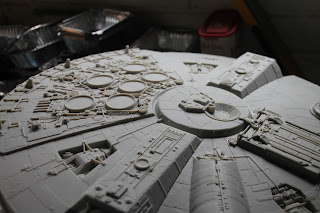 There are large blank areas on the model where Hasbro/Plaitoy/Licence holder has provided stickers (windows, engines, side panels and those six circular blank spaces).  To be fair, unlike a lot of surfaces intended to take a sticker, these ones are both flat and smooth, so it makes the next bit a little easier. 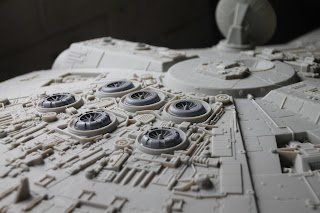 Fans from Zinge Industries.  Can't have stickers or blank spaces on a Ordos Tempestus Gun Cutter. 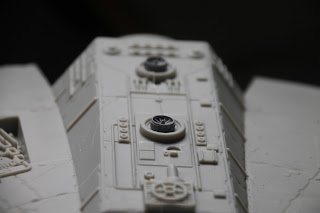 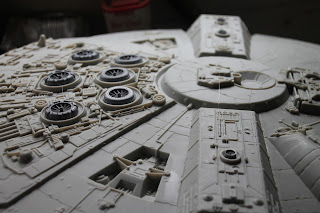 All the new fans together.

Well, there you have it.  Nine blobs of Uhu and that's all I have to show for months.  Oh well, c'est la vie.  I'd better catch up with what Fluttershy and Spongebobsquarepants are up to.
Posted by Zzzzzz at 20:54 4 comments: