If you havn't caught this already, (esp if you are 3D CGI teacher,) then check it out. Compare and contrast with the Ultramatines movie, a paid for professional film and this is done by half a dozen people in their free time:

This wins the internet.
Posted by Zzzzzz at 21:02 No comments:

The ASL's armoured bit is now all finished to the same degree. This week, I shall attempt to bring their Infantry to the same point, the individual soldiers and the Chimera. 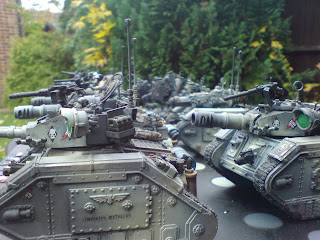 You can, if you look carefully, descern the different LRMBT models; the newer ones have a distinct slope to their vorpanzer. The Sqn HQ is the (# 400, naturally) LRMBT at the rear, along with the 2iC's Executioner. 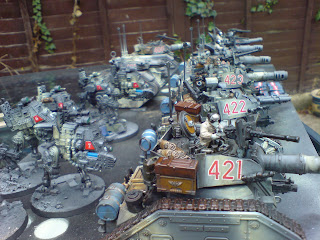 So there are two troops of LRMBT (incl an executioner and an anhilator, one in each troop) and two 'stompa hunter' troops; armoured sentinals with LC, although each of these troops has one 'executioner' model with a Plasma Cannon.
Posted by Zzzzzz at 18:11 4 comments: 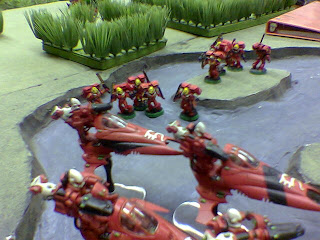 So now I've travelled sarf to the land of Invicta and foolishly challenged John (ie of JTS) on his home ground. Which turns out to be a promethium plant (Isle of Grain ?)

I have my glass hammer all ready to annihalate his Vraks renegades who are entrenched at the other end of the pipework. It all started well. The super fast and hyper manoevurable Jet Bike posse swept down the left flank and began chomping bites out of the opposition.

But I stopped. I should have remembered the lesson; move in 12", shoot and then jet boost away 12" in your own assault phase. John even mentioned Shaun's tau doing that very thing and I still didn't cotton on ! So I sat about 8" away for three turns and was moving the falcon and serpent up behind me. Eventually, despite gouging huge chunks out of the Vraksians, the jetbikeposse ended up so small that even the Farseer had had enough and they scoooted off for a rest somewhere less shooty.

It turns out that even a fousand points, an IG army can soak up damage (yes, they do die instead of making their saves, but there's still more of them than you've got ammunition....)

John then promptly shot down the falcon and serpent, exploding one and crashing the other into the 'moat' from whence the DA's would have been lucky to escape.
I should pay more attention or just be more careful next time: Just because they didn't move very far; didn't mean that they couldn't assault me, which they did.


My thanks to John and Val for their horse brutality.
Posted by Zzzzzz at 16:15 No comments: