Here is the star wars click together Republic Gunship from Revell. It could be thrown together with out glue and is pre-painted (as shown on the box) with a certain degree of weathering (enough for the tabletop, anyway). And it's next to the GW Valk. 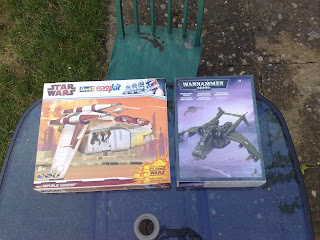 The next picture shows the fusilage sides and wings of both kits next to each other. You can see that they are of similar dimensions, although I suspect that the Valk may be slightly larger when finally assembled. 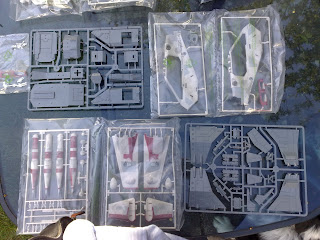 The pain comes with the apparent scale of the Revell kit. The little ISTs you can see here really are tiny in comparison to a WH40k figure. So the cockpit of the republic gunship, which takes a whole seated crew clone and his oppo; and their ejector seats, are most likely going to be replaced with the top portion of a cadian torso and a head. If you can imagine a real person in a glider, that's what it'll look like. fortunately, with the canopy as well (not as clear as the valk one), it should be ok. 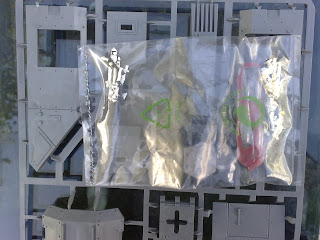 The gunship was from www.modelhobbies.co.uk for £22.98. With suitble changes to the weapons and perhaps a mod to turn the pointy pods on the roof into engines, it certainly has potential.

As you can see, my compressor has arrived. It was waiting for me Monday evening, which is when this photo is from, I've just been too busy to post it up (damn job!). The Valejo model air is great. And the cleaner is so good I'm now worried it'll eat its way out of the pot. 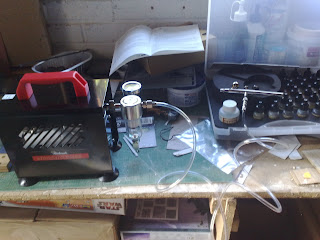 I had a play around and am absolutely delighted with my new toy. And have learned that it really is best to use proprietary thinners for the make of paint that you have. Won't be making that mistake again, but have already been out and sourced the requisit sauce to dilute the tamiya paint as well.

I've down loaded live writer. It does not show up anywhere. When I go the 'download more stuff from MS' page it tells me that I already have writer. But there is no response to clicking on any of the places where it says 'writer' on that page.

And when I go to the blog and right click, (Where it used to say 'paste', which is, after all, what I'm trying to do) I get the drop down menu with the 'blog using windaz live' option on it. And when I click on that, it just takes me back to the 'download more stuff from MS' page.

So, now blogger is broken (yes it is broken. a function that worked perfectly a fortnight ago, [the ability to paste documents and hyerlinks] has ceased to function). And the recommended fix, live writer, appears for all the world to be a circular reference to something that I've downloaded but cannot access.
Posted by Zzzzzz at 12:04 No comments:

Not a game, of course. I don't actually play fortykay...

I was looking for some banners I had done, and could not find them. I also appear to have misplaced all of my Hvy Wpn teams. Yeah, all of them. They are not where I thought they ought to be.

So tomorrow night I will scour the garage and see if I can find some missing stuff.
Posted by Zzzzzz at 18:41 No comments:

This piece will be a sort of "Wall of Heros" with bits of wire hanging out perpendicular to the wall, supporting a load of banners (I have some left from our RT days and can down load more from t'web). My aspiration is that this will be quite a long piece, with ruined wall at the ends and old tattered banners amongst the rubble. 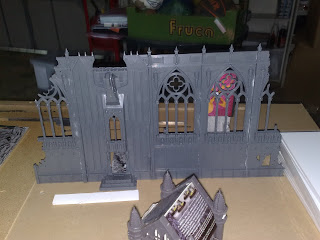 I am contemplating this actually being the back of it; the other side has less detail and therefore the interest generated by the banners will not have to compete with the detail on the kit.

I had some flying butress bits left over from the pegasus gothic building kits. So, in a sort of brain fart kind of way I threw this together and topped it off with CoD walls. Now, as a building, this could have a conceivable purpose (a ritual purpose, for fans of time team). I could put a ladder up the inside and a hatch in the floor, but it'd sort of spoil the aestetic.
So despite it not really having a purpose in a normal building sort of way, it will make a great place for a unit in a city fight. So, I'll fill the holes, mount it and it'll join the painting queue. 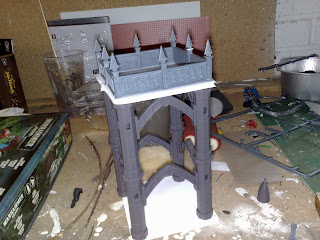 This is the pegasus building I was looking at a few weeks ag0. Now that the weather is better and it's light a little longer my Monday night is not confined to splashing paint over the little men. All of these 'modest but satisfying progess #' posts were the work of one Monday evening. And when the light did go, I was able to watch two episodes of "Firefly". One of the apoc generals has loaned me the boxed set and it's really similar to our old traveller adventures. 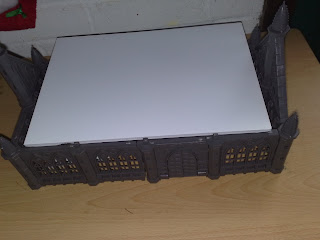 This is it with the large peice of foam core from the picture above trimmed down to fit. Two more peices have been cut to fit around the columns at the end and fill the gaps. The balsa (firework tails) has been cut to reinforce the floor. Another peice of old firework has been drilled and pinned to provide an apex for the roof. This beam means that I don't have quite so much jiggery pokery to do when I make the roof. And the sides could be seperate... 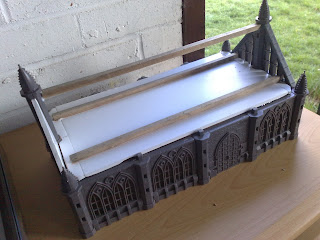 This is it with the floor the correct way up. You can see from the angle of the gable end that the roof is supposed to come down to the wall on the inside of the lugs for the top of the columns. Fortunately the Pegasus and CoD sets have enough gargoyles to decorate the column tops, bit I suspect that I shall have to cut the lugs off. 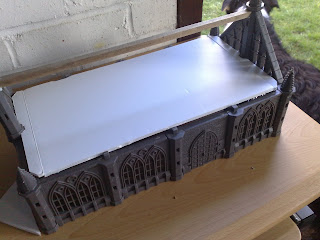 Here's the roof for the tower. Now I have the shape I can use this to cut the plasticard tiled roof to the right shape. 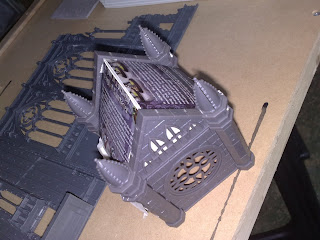 I plan on leaving the roof removable, in case it gets shot off during a game. So the tower will obviously be needing a floor for the snipers/devistators/pathfinders. 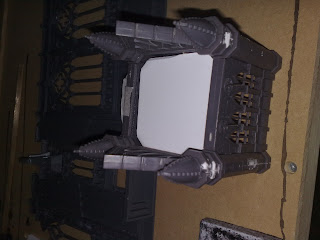 The floor wasn't particularly co-operative when it came to staying in place. So I drilled holes in the walls and pushed a couple of lengths of wire through for the floor to rest on. The masking tape and block on the left of the photo are just there to retain the wire (and glue) when the section is on its side waiting for the glue to set. 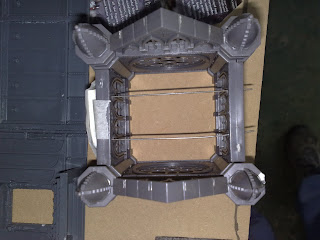 So the tower is nearly done. Looks like it'll need painting soon.
And welcome to the Cadian 127th.

An end to my constant moaning.

I have purchased a compressor.
Posted by Zzzzzz at 13:56 1 comment:

OK. It appears I cannot now paste into blogger from my clip board at all. Not links nor documents. What has changed ? I'm doing exactly the same thing.

Death to the IT Geeks !

It's let me paste the word.doc in the comments bit, of course. How silly of me, from now on I'll just put headlines up here and expect everyone to read through the comments to see what I actually wanted to post. >aaaargh<

(Pasting into the comments box has upset the formatting so it won't actually be in there.)

Pegasus models are made in China or somewhere, which means that they are often out of stock in wargame emporia. But they are good stuff, by which I mean that they are easier to build than DIY foamcore buildings/ruins and much less expensive than GW's CoD kits.

Who appears to carry the whole lot. Which is nice. And a lot of their stuff is aimed squarely at WH40K and it's peers/derivatives.
Posted by Zzzzzz at 10:32 1 comment:

I was browsing through blogs and saw daughtersoftheemperor's exorcist WIP. Which included an ornate, victoriana-like missile launcher. Which she obtained from here:

There appear to only be 15 products there at the minute. And I have sworn off spending any more money myself, at least until I've had a bash at all the stuff I've already got. But there's some nice looking stuff out there.
Posted by Zzzzzz at 09:30 No comments:

What was I thinking of ? 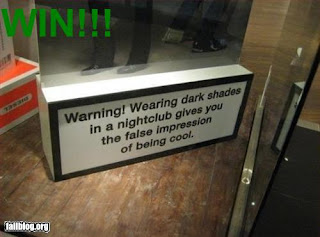 Prompted by an e-mail from Ron, I sort of laid out why I'm simultaniously building four armies and planet for them to fight over.

Y'see ? When you say it in one sentence, it's over quick and doesn't hurt at all.

Breaking it down into bits gives names to the pain/plastic crack mountain:

And that's without all the painting let over from last year.

The first step is to stop buying any more. I have four more LRMBT and three more Valks on order (sort of). And some more Eldar to pick up. It's money that I've already spent. So no more purchases. Except maybe a copy of Battle Missions and the next IA book when that comes out. But taking a leaf out of other FTW blogs, they can be stage rewards perhaps.

And I need a regular slot in the week to spend painting and gluing. Monday night looks like being favourite - double Corrie. I can spend that in the garage.
Posted by Zzzzzz at 20:13 No comments: