Er, dunno where these'll fit in. 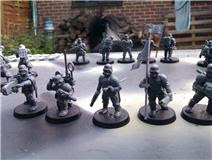 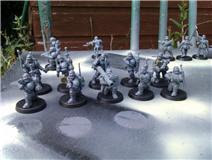 These guys look like a decent kill team, all fitted out with laser range finders and lamps for night fighting. P'haps. 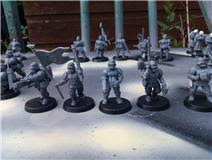 So the bits built two command squads (good for Apoc, where I'll be scattering them like confetti). I'm currently writing them up as the Margrav Hakisyke's household guard, just so I squeeze them into my army somewhere. I'm thinking black with very dark fatigues, sort of like the Death Star fellas.

For anyone who doesn't know - those are the heads for the Wargames Factory greatcoat stormtroopers. A small amount of butchery to get them to sit where I wanted, but then, they'll pass once they are painted.
Posted by Zzzzzz at 20:39 No comments:

Three cheers for the FOI !

http://www.bbc.co.uk/news/uk-england-leicestershire-13713798
So the UK is unprepared for a Zombie attack. Who knew ? I'm off to Italy (via Norwich). I'll keep an eye out for anti zombie measures.
Posted by Zzzzzz at 21:44 2 comments: 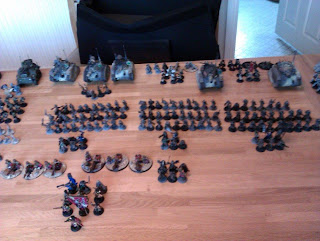 The mass of bodies in the centre of the picture is a large part of the Kado 540th Infantry Regt, orginally the Valhallan 540th, but there are now possibly more Kado bodies than Valhallan ones, so that's the way it is.

Anyway, I've just assembled the last fifteen of them. So when they are all based and painted, I'll have to get them all out and divide them up into squads/platoons to see what the final orbat is going to look like. I do like the three large platoons. I can do four smaller ones, but meh. I'll blob them up with commissars and they can walk down the centre behind the ASL's wall of LRMBTs.

Oh oh ooo ! Admiral Drax has shown me a sneak peak of his LCI project* It looks really good. I am so tempted to put one of his pictures up, but that would be stealing his funda, so you'll have to keep an eye out.
Posted by Zzzzzz at 16:56 No comments:

Pirate Viking Painting: Death Korps sir! Thousands of 'em!: "A very short update today as there is only one picture that matters, this one! This is the first time I have attempted to shoot such a la..."

Gulp. There's loads of 'em. I'll leave the banner picture up as the header for a few days. Jus' to gawk at.
Posted by Zzzzzz at 22:20 No comments: 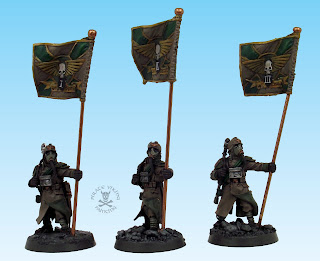 Pirate Viking Painting: We'll keep the khaki flag flying here...: "Well, this is it! The last Death Korps! I decided to leave the banners for last as a treat so here they are: This fellow is the Command H..."

So, They are almost ready. Quake in fear, rebellious citizens of Devos IV....
Posted by Zzzzzz at 20:16 2 comments: