The Necromunda 1st ‘Death’s Head’ Regiment was numbered as the first regiment of six raised as part of Necromunda’s tithe two hundred years ago.  Traditionally, Necomunda Regiments are given titles that link to their founding, either by location or by affiliation (ie Hive or Gang).  The Necromunda 1st ‘Death’s Head’ Regiment were recruited largely from populations with links to Orlock gangs and therefore the adoption of skull badge, whilst in keeping with the idiom of the Imperial Guard, also served to give the newly ‘volunteered’ Guardsmen a sense of collective identity.

Originally with a strength of almost 7000 officers and men, the foot regiment was dispatched to a series of minor wars and insurrections in its first ten years, which wore its numbers down to roughly 6000.  Police action on Agripinna was followed by garrison duty on a number of worlds.  After thirty years of active duty the Regiment was settled on Luxor and with a cadre of veterans, the second generation entered imperial service.  On Luxor, the settled Imperial Guard communities are/were separate from the native population, this was encouraged and managed by the Departmento Munitorum to foster a martial society that would continue for another two generations at least, that would feed the Imperial Guard with its require recruiting numbers.
The second generation fought at a number of insurrections in the Cadian Gate region, occasionally facing veterans of long war.  It was withdrawn towards the galactic south when numbers fell below 4000 and spent the next eight years fragmented as ship board detachments serving with the Segmentum Occularis Fleet on anti piracy and ship security duties.  During an action to clear an ork pirate nest from the asteroid belt in the Belatis system, successive parts of the regiment were reunited as they were throw piecemeal at the green horde.  At the end of this campaign, the regiment was down to three officers and four hundred and sixty one men.  It was returned to Luxor, de-mobbed and reformed in a new guise.  Once again, the Necromunda 1st ‘Death’s Head’ Regiment  was formed with a cadre of veterans and a new intake of Luxor born Necrodumans.  This time, for three generations of continuous service, they were given the reward of being re-roled as a mechanised unit; whereupon they were immediately dispatched back to the Cadian Gate region to counter increases in raids from the Eye of Terror.
After ten years on campaign, the remains of the regiment was settled on Quadosh IV, were it wsa effectively ‘lost’ by the Departmento Munitorium for thirty two years.  However, owing to its legacy of professional soldiering and background of coming from what had become a martial society, the fourth generation were trained and ready when the call came.  Back to full establishment for the first time in over a hundred years, the regiment was attached to the Cadian forces sent to Medusa V.   The regiment was rouled out of Medusa V and remained a part of the Cadian Gate protection forces for another twenty years before being returned to Agripinna and broken up as cadres for four new regiments from Necromunda, one of which retained the unit title ‘Necromunda 1st ‘Death’s Head’ Regiment’.
This new regiment was earmarked for the Damocles Crusade but in the event was re-deployed with the Segmentum Occularis, fighting a combined arms war wherever it was sent.  For the next sixty years the regiment was reinforced by intakes from Luxor born Necromundans and Cadians.  These were always casualty replacements, however, not the mass-rebuilding of previous generations.   Over this time, numbers had dropped below three thousand all ranks.  However, their reputation as an experienced hard fighting unit meant another change of role.
Most recently, the Necromunda 1st ‘Death’s Head’ Regiment, deployed as a Drop Troop regiment was involved in actions within the Cadia system itself.  Following the retraining, they were used as 17 Korps mobile reserve on Kimver, covering the armoured advances flanks.  When the final assault on the recidivists stronghold faltered, they were committed to tip the balance, which they duly did.
The six officers and one hundred and forty men who survive remain as a permanent attachment to 17 Korps HQ as its security detachment.
Posted by Zzzzzz at 12:19 6 comments:

The Horus Heresy and the lure of a new Kaos Kodex

Must.  Resist.  Spend. No. More.....   AAAAAAAArrrrrrrrrgggggggggg! 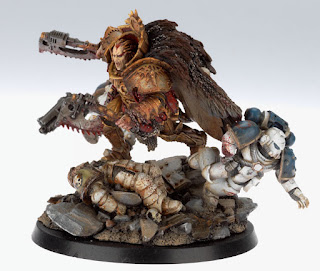 Who am I kidding ?  Dear Forge World, my wallet is open, do as thou wilt with me. 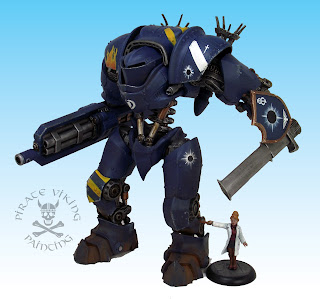 And the way I want to play it. 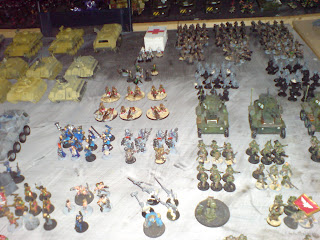 OK.  I had tried to form my thoughts around my 40k iggies into a coherent force; not in terms of FOC, which is a meer conceit to make a game playable, but in terms of a proper ORBAT.

The issue I had was that I had constructed based on the idea of Battalion sized blocks building Brigades and thus Divisions.  The problem with this is that 40K IG Regiments are already Brigade sized.  I point you to the Taros Campaign for perhaps the best illustration of this idea.  Specialised units, airbourne, or those armour heavy, are smaller, but still bigger than the Regiments I am familiar with.  The closest fit being the DKK 19th Armd Regt in IA1.

So my carefully imagined army needs re working.  Essentially, the formations I have down as Brigades, taking into account the size of the Regiments (ie already Bde size) could be large Divisions.  So that bit is easy enough.

For me, figuring out how this army fits together, where all its component bits come from, what the reporting chain is, how it is supplied, what its Mission is, where the commanders see their scope of operations ending and so forth is actually the fun and important bit.  As I've previously discussed, the SM are for giving someone a bloody nose, when the High Lords want to win a war, they send a Guard Army.
Posted by Zzzzzz at 19:14 4 comments:

OK then, my answers.

1.        Favourite Wargaming period and why?
I like 40K fluff, would be ok with Star Wars, but really wish I still had the time to run my FRPG campaign.
2.       Next period, money no object?
Here, money = time.  If I had more time, I'd just do more of what  I already do not have time do at the moment, perhaps even play a game of 40k.  Not really interested in FoW, world of tanks, ancients or anything, I'd just like the time to actually use what I already have.
3.       Favourite 5 films?
I baggsie the LotR Trilogy, as one item.
Touching the Void
The cartoon of the Iron Giant, makes me weep like girl
I'm kinda lost now, anyone know any other films ?
4.       Favourite 5 TV series?
You're kidding right ?  Time to watch TV ?  Ok then, I'll give it a shot; Whatever the BBC Natural History unit are putting out (from Life on Earth through to Frozen Planet, but they only happen one at a time, am I allowed that ?)
Oh and Katie McGrath is in Merlin, which would be more than enough reason to get the boxed sets.   This is no endorsement of Merlin, which is a jolly crackin' kids programme, (but not classic TV) just the one actress.
5.       Favourite book and author?
Hate Abnett, he robs me of time I don't have.  As do others who I read; Doug Beattie, Dan Mills, Ed Macy and their contemparies.  Have just passed '607' to my father in law, who was a penguin for 22years and now picked up 'Pheonix Squadron' by the same author, Rowland White.  So today, that is my favourite book.  Usually try to find something by Beevor, Hastings, Holmes, Delaforce, Urban or the like as a holiday read.
6.       Greatest General? Can’t count yourself!!
Gauderin possibly, for joining the dots and making armour work.  Marlborough did a fantastic job.  Wellington (or Moore).  Friedland for what he represented as much as anything.
7.       Favourite Wargames rules?
Rules, yeah.  I've seen those.
8.       Favourite Sport and team?
Alpinism.  Oooh team sport - FC Barcelona (ie ABU) in football.  Our Olympic cycling team did well.   Best ever team performance ?  USN 1941-45; from not exactly fab to world beating in half a world war.
9.       If you had a only use once time machine, when and where would you go?
No way am I getting in that thing - it either won't work, or it will fuck up the universe and I'll be responsible.  No.  Not worth the risk, give me the keys, now.  And go and find something useful to do, like FTL travel or terraforming; stop mucking about and do something useful.
10.   Last meal on Death Row?
Bangers and Mash
11.    Fantasy relationship and why?
Katie McGrath. She can sword fight proper, y'know.
12.   If your life were a movie, who would play you?
Simon Pegg.  With dyed hair.
13.   Favourite Comic  Superhero?
Lord Peter Flint.
14.   Favourite Military quote?
"If this turret was cheese, we could eat it"  (I was rudely awoken by the tank commander and really still asleep in the gunners seat when that fell out of my mouth)
"We're wasted, man; we're fuckin' history" (Our US exchange Sqn Ldr when asked for a sitrep after 24hrs playing OPFOR against the rest of the regiment, the cool rejoiner was "Use correct VP, over.")
15.   Historical destination to visit?
Gondwana - that would be kool.
16.   Biggest Wargaming regret?
I wish I could be bothered to learn the rules.  They seem so important to some people.
17.   Favourite Fantasy job?
Ne'erdowell and all round gentleman of leisure.  I'd be good at it - never run out of things to do.
18.   Favourite Song, Top 5?
Hummm.   Galway Mare, by Show of Hands.  Makes me well up, every time.
19.   Favourite Wargaming Moment?
Getting three strangers in my garage for a day - superb.  WILL do it again.
20.   The miserable Git question, what upsets you?

Being dismissed as incompetent happened this week, which was pretty galling.
A certain person who should take more of an interest in me being hugely dismissive is an issue for me.

And cruelty to animals.

And people who think the world (HM govt) owes them something, when they have put nowt in.
And those who prey on the weak.
And the willfully ignorant and those unwilling to even listen to the other side.

And the lazy, unimaginative, incompetants who drive in lane 2, reducing our motorways to dual carriageways, increasing the stress and danger for those of us who bother to wake up before driving.  As Clarkson said "Child molesters, all of them."