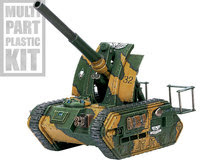 This is the iggy Basilisk. It is quite often seen in hand to hand combat with everyone the IG fights. It has a scale range of, well, not very far.

Jessica Alba, if you ask me. 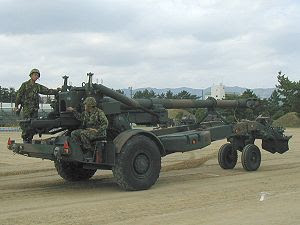 This is FH 70. For those unfamiliar with arty systems, the barrel has been reversed over the trails (legs). It would be other way 'round when brought into action (made ready for to fire). It would normally be towed, the little engine is just to get it into final position and power the hydraulics. (interesting anecdote - The Indians bought them without the engine and have 55 person crews to man handle them into position.)

FH70 has a planning range of 17km. ie an FH 70 battery would be placed 17km behind the front line; it has enough give and take in it's range and capabilities to cope with the front line moving a few km in either direction.

On a 6' x 4' board, the FH 70 would still be a football pitch or two away. I'll quite happily pay the points for the bombardment. No way am I putting a Basilisk on the tabletop.
Posted by Zzzzzz at 14:27 2 comments: 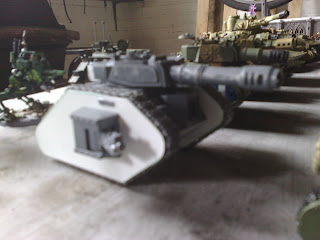 The left over bits from the building of the 22nd ASL were enough to make this. Devos IV PDF's 79th Cav gets another tank !

I've seen other peoples plasticard LRMBT and Chimera sides, with all of the detail faithfully reproduced. I really cannot maintain concentration for that long - or even begin to start measuring it up. I might cover it in Zimmereit later. Perhaps.
Posted by Zzzzzz at 14:59 No comments: 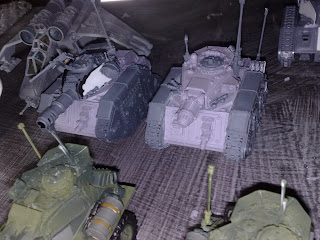 Coy HQ. The OC and 2iC's Panzers. Not quite sure who will get the executioner. Probably the 2iC. 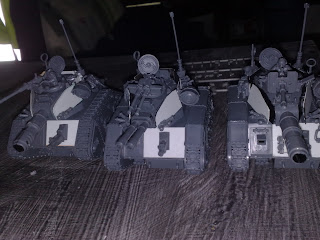 1 Troop. The anhillator is nice - the guns fitted straight into the 'old' LRMBT turret, no trouble. The first bits of vorpanzer were spaced out from the turret on spare GW single track links. But I might need my stock of those as I work my way through the Chimerasaurs, so the later ones are all spaced on the thinner sections of tank wheel sprue. 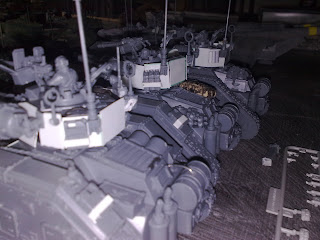 There is another troop to add to this little bundle of tankie goodness, but I have yet to receive the models. Also, I have stuck another ten gasmask/beret heads on cadian bodies, pending some arms. These will be detachments from the Devos IV 1st (Special Forces) Regiment. I'm imagining dark grey fatigues, black flak and red berets. Sort of like guardian angels (from the 1980s) with melta guns.
Posted by Zzzzzz at 14:44 No comments:

The Imperial Guard Command Suite on the 1505th Imperial Navy transport vessel Optime II
"General Tolstoy Sir ?"
"Yes, what is it ?"
"Vox from the Starport, General; it has Kaptain Ilich's cypher, but it was sent in clear gothic."
Silence.
"Well ?"
"It is just one word, General: 'Tranquility'."
"Good. Assemble the General Staff and the Divisional Commanders immediately in the briefing room. Ask the Navy to pict link us to Lord General Zhukov as well, if they would. It's time to return the light of the Emperor to the darker corners of Devos IV."
Posted by Zzzzzz at 14:30 No comments: 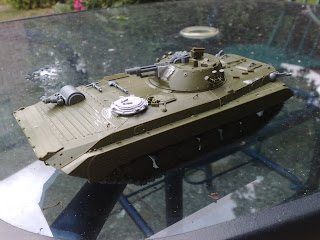 The first of the Chimerasaurs for the 13th Mech. It's a Revel 1/35th BMP2. The four of them were knocked down to £9 each so I 'ad 'em. It is an old model - the moulds were obviously worn as there was a fair amount of flashing and awful die marks. Much worse than any other Revel kit I've looked at recently. I suspect this one is now is OOP and trying to find a Revell 1/35th BMP2 will either draw a blank or get you a new (well moulded, joy to build etc)one. 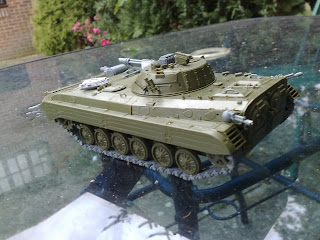 It's got a hull mounted flamer. An ugly carbuncle, I know, but the WYSIWYG fiend in me won out over the other me. A sentinal ML for the turret, GW tracks and two chimera las guns - being a BMP it has moulded in firing ports in front of where the las guns are. 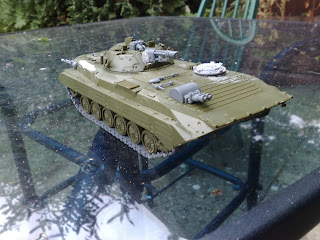 I've done a bit more work on the org and disposition of the Devos IV PDF as well. So all of those cadian coloured LRMBT are actually the 79th Cavalry Regiment, not actually part of the 13th Mech. So you can expect these Chimerasaurs to be in the Tigers green and yellow stripy pattern. I can't wait to start masking them up (rolls eyes).
Posted by Zzzzzz at 14:41 No comments: