And now, the news.

First the bad news: I've got a job - now this is only bad in that I will no longer be a gentleman of leisure. It's a proper career job an' everyfink, highest wage I've ever pulled, which is nice, but I'll be leaving home at 0700 and getting back at 1900. So there will be a little dent in the Devos IV campaign build up.

The good news: I've made progress with my reinforcements for the Valhallans, the Bloodcoats and all of the armour.

Here are wolverines, decals and pin washed, with little rust; scratches and dings and purity seal still to do. 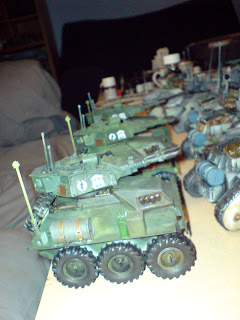 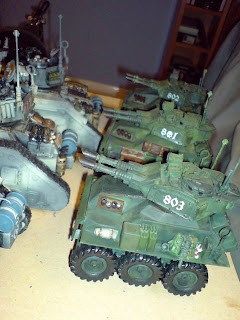 And, as mentioned in JTS, GW are launching their legal team at Chapter House. Which we decided was a shame'n'all. I've just pciked up from here http://plasticlegions.blogspot.com/2011/01/corporate-misadventures.html That GW's timing seems to be dictated by their legal advisors and allowed to go ahead, despite the chance of pissing off everyone who has anything to do with Adepticon. Nice one !

And whilst we're at it, why is WD no longer going to be stocked by WH Smith ? For anyone from outside GB reading this, WH Smith is our largest newsagent - if there is a magazine about something, WH Smith will get it in for you if they don't have it already. So if we'll still be able to get WD from GW shops, FLGS and Menzies, then why the rift with Smiths ? Looking forward to Jervis' Standbearer explanation of this one.
Posted by Zzzzzz at 20:07 2 comments:

I remain madly excited, like a small boy at Christmas. Combined with own recent burst of progress, things are looking up for Devos IV ! I must apologise to PVP for letting them get so battered. I did leave him with a (large) handful of resinous casualties to return to fitness. I sincerely hope that he is enjoying as much as he seems to be.

Now, I must concentrate on the rebels a bit.
Posted by Zzzzzz at 10:52 No comments: 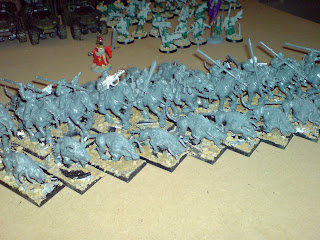 13th Mech's Rough Riders with their Chaos Hound screen. Of course they are more of a CC threat, but they all move the same and should be interesting on the table top. Anyway, these are now based (after lanquishing for a year or more) and ready to basecoat. 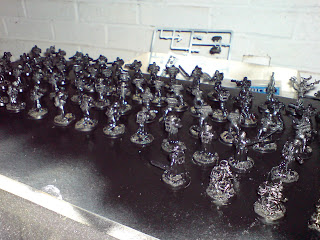 Basecoating in the garage - I've got the Cadian 144th Recce Regt nearly ready for the table top - tranfers and pin washes on the wolverines and weasels. Sprayed the insides of the valks, so crew next and then they can be put together. 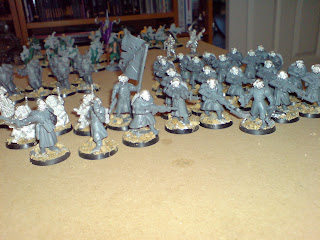 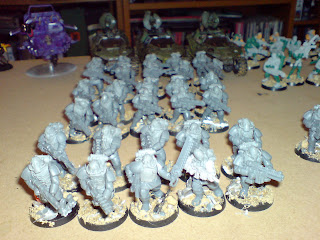 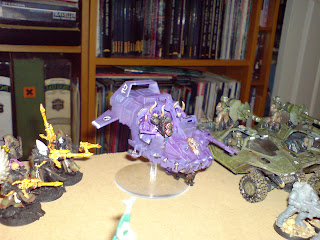 An Emperor's Children speeder. S'mazin' what you see on Devos IV. Three more of these to do.


Got to think about the transfers for 79th Armd Regt. And picking up some more kits that are waiting for me somewhere.

The whole Devos IV project, has for me, been revitalised by the sudden rush of progress. I am enthused and looking forward to April or May when hopefully the armies will be ready and the scenery ok as well.
Posted by Zzzzzz at 21:50 No comments: 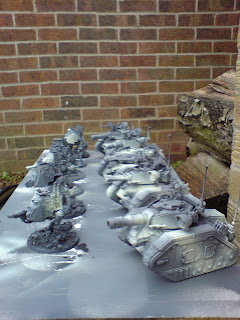 This is it; Citadel Chaos black undercoat, Tamiya German Grey and Army Painter Necrotic Flesh Camoflague striping. The authentic ASL colour scheme, perhaps. These are now ready for transfers, detailing and all that other stuff. 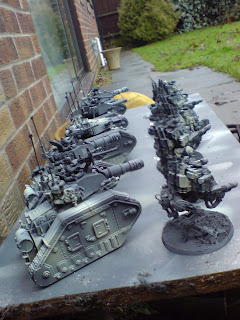 I'm still really pleased with the vorpanzer on the LRMBT turrets. I'm sure if I were a sentinal pilot, I'd want an ejector seat; failing that, an infantry escort. Not that an armoured cab is a bad thing, certainly better than just a roll cage. 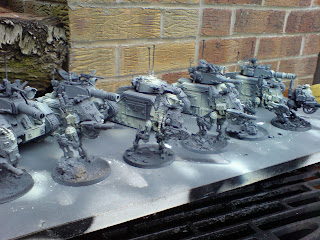 In terms of progress elsewise, during the meanwhilst I got to grips with my airbrush, put paint on nearly everything (ie a base colour over the basecoat)and then broke the airbrush somehow.

I also bought Soviet Space's Siam Hain and have finally got to grips with painting my DKK by paying someone else to do it.

So hopefully the Devos IV campaign will actually get underway this year. Given enough warm weather, I should be able to spend more than ten minutes in the garage before freezing to incompetance; getting some of my terrain peices finished.

And I must mention the Kataan Updates blog; if you like the idea of build your own armour, this is inspirational. Both the recent updates and the archive. Nice to see blogomancy in action.
Posted by Zzzzzz at 08:42 No comments: