Link of the season

http://www.yestthetruthhurts.com/2010/06/steleks-stormraven-conversion-how-to.html
Posted by Zzzzzz at 21:25 2 comments:

There's a bit in this months WD where the guy who drafted the Spearhead supliment describes the Imperial Guard's vehicles as resting somewhere between WW1 and WW2 (with added zap guns) in terms of AFV technology. 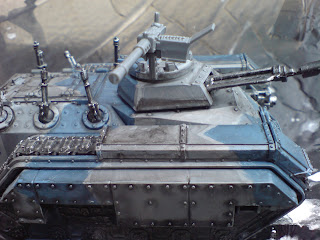 The thing that grates slightly is that so far through our history, those who have innovated have been the winners. I know that we can have more advanced vehicles from different planets where things arn't quite so dogmatic, so no real complaint there. 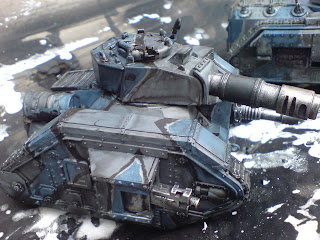 These things have no suspension to speak of, rather like a modern buldozer or 360 excavator. The suspension on these is in the seating and the lack of flex in the running gear is to keep the damn thing still whilst it does it's job (moving earth). In the LRMBT and Chimera this would compensate for a lack of hi-tech gun levelling mechanism. It'd still be rubbish, but it wouldn't be able to bounce on its springs when it fired its battle cannon.
Woe betide the Iggy AFV crew, whose attrition rate is going to be related as much to muscular-skeletal disorders as it is to enemy action.

The PLA on parade 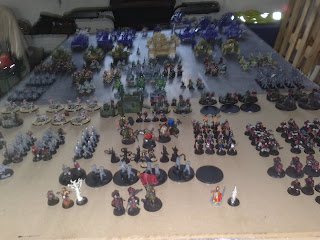 In the front, the 99th (Bloodcoats) Inf Regt. On the grey in the middle the 13 Mech (the Tigers)
Regt. And at the back, in the purple, the Indulgent, an Emperor's Children warband.
I laid them all out and have been plunged into dispair by the amount of work still needed. And then quite pleased that so much of it could be used now.
The whole lot is laid out on a 6 x 4 table, so there's enough of them to put up a decent fight.
The 99th are missing all 4 officers at the moment. The CCS includes the FW anti-hero bloke, but I'm after an officer type with a little more class, so he's the CSM. FW, if you ever trail through the blogosphere, I'd like vraksian officers please.
And I'm going to add another sqaud of vets (Disciples of [Xaphon] Chaux Nrr'mersee). There are four squads to a platoon, so it'll be a while before I add another platoon.
The 13th are missing about 14 riflemen and some bullet catchers for Col [Straken] Choo.
The Indulgent, paint job aside, are ready to go.
Posted by Zzzzzz at 10:00 1 comment:

Soviet Space was very encouraging when I played him. And he expressed the opinion that I should post images of figures. 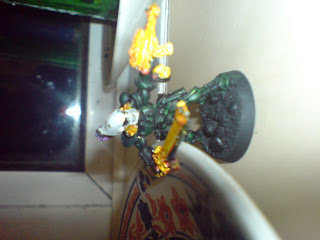 You may remember pictures of my Ulthwe force from months ago. All of the aspect warriors are basically done in their craftworld colours. So this scorpion is basically in black, with his helmet based in Khaki, then successively drybrushed with bleached bone and then white. (You cannot see from here, but his sensor mane is in purple, in line with other craftworld detailing).

And yes, all of my Ulthwe weapons are painted yellow. And all the Bel Tain ones are blue. As well as his craftwrold colours, he has been overbrushed DA green. Aspirationally, all of the Ulthwe Aspect Warriors would be similarly finished in a colour sympathetic with their shrine.

Whereas this would seem to work fairly well for Ulthwe, I don't have a plan for any Bel Tain Aspect Warriors beyond their own scorpions, who are camouflaged. Best get my thinking ghost helm on.
Posted by Zzzzzz at 22:40 No comments:

In the late 1970's the swiss designed a purpose built recce vehicle called the piranha. The US and the Aussies both retain it's amphibious capability. The Cadian version is called the Coyote. All are in service at the moment in Afghanistan.
If you've got a few quid to blow then instead of that last pint, this month's Military Modelling International contains a Coyote conversion using this very model as a basis: 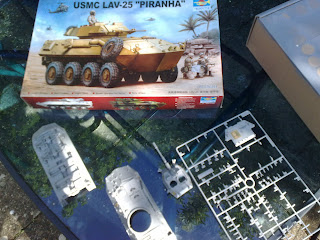 I have replaced the perfectly normal and adequate 20mm bushmaster auto cannon barrel with a preadator autocannon. There is a length of brass rod up the middle to keep it pointing in the right direction. I've also festooned it with =I= etched brass. Needless to say, the LAV 25 model has been sitting in plastic crack mountain for two years, about half as long as the etched brass. e 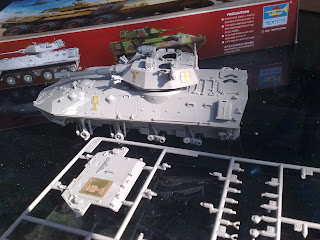 This is it with the multi shade grey, grey, grey and grey camouflage pattern. You'll have to take my word for it, it looks even better in the 'flesh'. 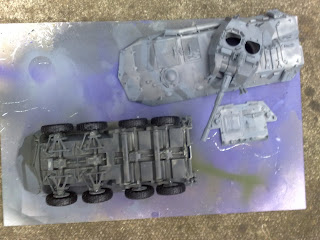 The reason it is still in bits painted is that it was held together by the masking tape for the cam to be applied, so the paint job is cohesive. Leaving it to be split apart again afterwards was designed to allow the 'glass blocks' to go into position in the periscope holes without being painted over. The 'glass blocks' were a thick clear film which even with the super must have GW yellow handled tweezers, refused to go in. Sod it, I thought.
It's now together with blue crew hatches on the turret, to tie the vehicle into the Inquistrix's force by colour, as well as having =I= badges all over the place.

I ran my first half marathon in about six or seven years last Saturday. I was aiming for 2:30 and acheived (officially) 2:31:36, so I suppose that's not too far off considering the heat an' all.
Posted by Zzzzzz at 19:29 3 comments:

With the axle of the second armoured car repositioned, this is how the three of them are after the bank holiday weekend. Sorry about the dark pictures. The writing you can see is my naming /numbering the parts as I made them. 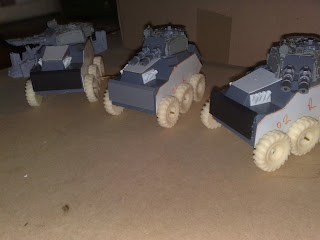 In the flesh, as it were, they don't look too bad. Although they are, by comparison with IRL vehicles, top heavy. for instance, the Alvis Saladin armoured car from the 1960s - a six wheeled AFV. It's a lot more squat (now there'd there's a word to conjour with in a fortykay context). 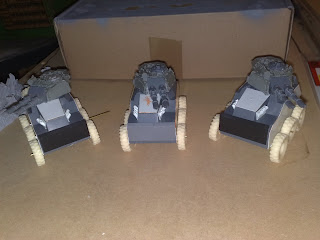 What they really need is mudguards and bracing for the same (which depends on my ability to cut six 10x90 strips of plasticard without wobbling too much). Then I'm planning on adding either two or four aux fuel tanks on each side to reflect their role as a part of the 144th Long Range Recce Regt. There'll be a modicum of other stowage as well.
Attacking the Plastic Crack Mountain:
Also over the BH, I got the whole of the 99th 'Bloodcoats' out togther to get a good look at the lot of them. I put fourty vraks torsos on cadian legs. I put ten cadians together with gas mask and beret heads (SOTR ones) these are the disciples (hardened vets). I've left these arm-less for the moment. The wargames factory greatcoats should be here soon and I want to see about sticking the Cadian arms and ancilleries on the greatcoat bodies (with Pig Iron militia heads that I already have) and trying the wargames factory arms and ancilleries on the Bloodcoats. And I've found two more HW squads to round out the 99th.
Posted by Zzzzzz at 03:52 3 comments: 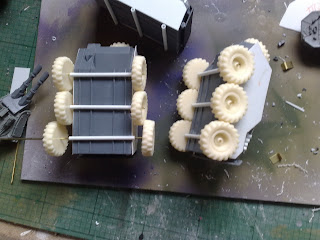