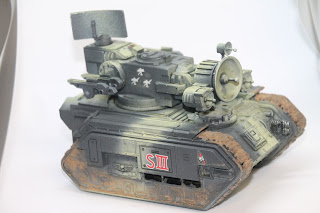 Gotta love all those TLAs.  Filters on, mud on the tracks etc. 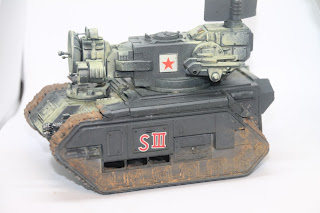 I really need to do the missiles. 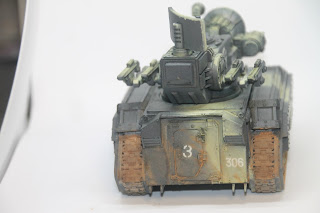 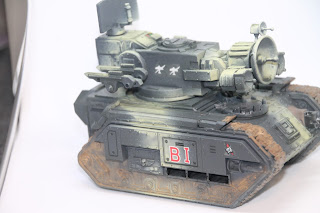 I love the kill markings. 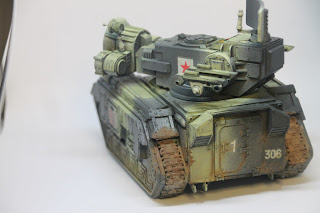 There are still three more to do, but they'll have to wait until sufficient Chimera chassis have been delivered. 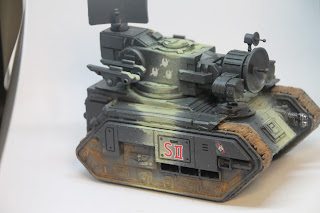 So Obviously these are the only guys to ever shoot down Eldar. 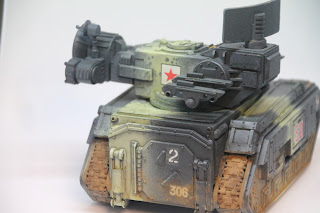 So that's these about done as well.   Bar the missiles. 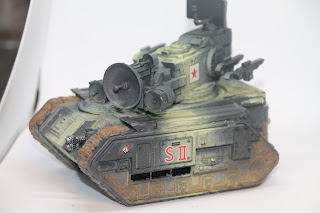 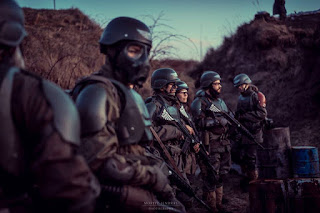 Well, if you live in Great Britain and/or have children, then you are probably aware of the 500 words competition.

If you're not, then in a nutshell, it's a competition for kids to write a story in 500 words.  Winners in various age categories are voiced up by A list celebs and performed for the benefit of the Duchess of Cornwall, who hosts the finale/prize giving each year.  It gets hundreds of thousands of entries annually. 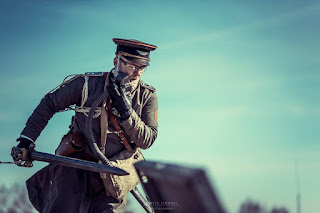 "Ok Zzzzz, where are you going with this ?  Will I get to meet the Duchess of Cornwall ?"

Well, no.  It is almost certain that if you're reading this, you're too old to enter.  However, if you're still reading this, then this is your invitation to whup up something for Devos IV.  This year's official 500 words competition ends closes today, but I'll leave this invitation up, at least for now. 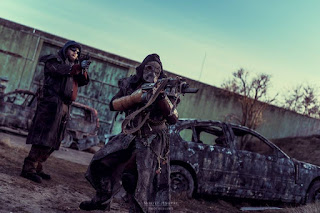 500 words is fine, and there is no prize beyond me posting it up on this blog.  If you feel the need to mug up on Devos IV, then any of the posts with the 'background' or 'the campaign' tags could be where you might find inspiration.  There are any number of Inquisitorial Warbands (of all denominations) heading to Devos IV as a result of the conclave of thingamy, so there's a mine of opportunity there.  And there's the fragmented remains of the PDF, the gangs and muties and CSM in the city, just being joined in an audacious move by a large contingent of Blood Pact.  What's not to like ?

There are a lot of mentions of units from other people's blogs in here, if you're not sure then ask, I can generally find the mentions...

If you hit up my profile you can email me.  A word file would prolly be best and if you want to illustrate it, so much the better.

So if there's something which you think fits Devos IV but not your campaign (lookin' at you, Jornathi boys) then here's your invitation.

As ever, all of the (in this case, wonderful cosplay) picts are ripped from the internet with apologies to the artists.
Posted by Zzzzzz at 01:40 2 comments: 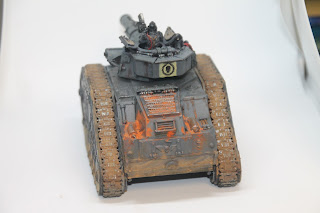 Here you can see the honorific wreathed skull on the stowage bins at the rear of the turret.  So it's either a battle honour or other signifier; FOO tank or somesuch. 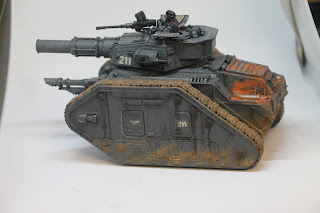 Hopefully the streaking and the dust will show up. 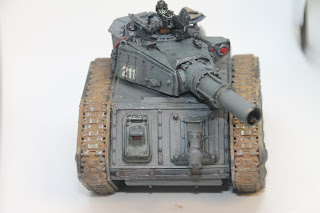 The tracks (and some of the actual structure) has wear and chipping (mostly 8B pencil). 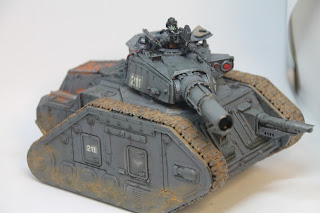 So, I'm happy with this.  It does not fit with the existing fluff at the minute, but I'm sure I can work it in somewhere.

They were of course, hiding in the last place I looked.... 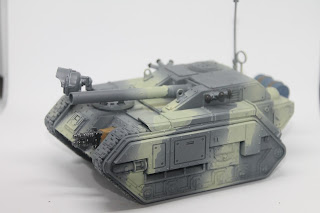 The barrels had collapsed onto the super structure so I removed them and pondered how to fix the problem.  I could drill into the hull and the resin barrel piece but get the angles wrong (all three times) and it would be a wasted effort. 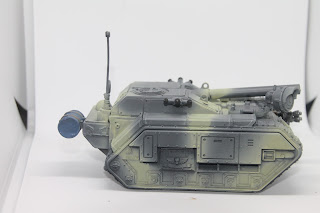 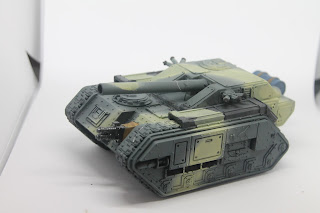 So all sorted, repairs made.  The base colours were applied ages ago; but two of them didn't have track guards.  So the Models and Minis track guards are fitted and more paint applied. 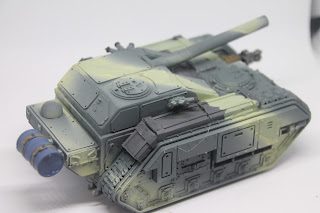 It's fairly easy in these pictures to see that the retro fitted parts are in a different shade of grey.  The camouflage is matched up, 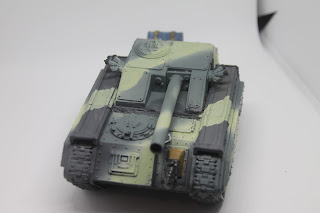 the hull weapons, grenade launcher caps and fuel drum were all coloured in. 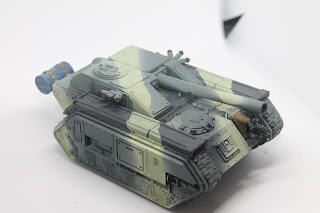 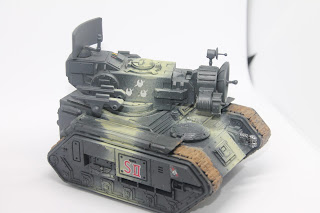 Tamyia mud sticks and them Mig euro dust and white spirit, on the tracks. 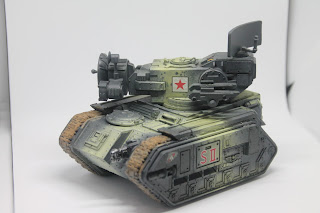 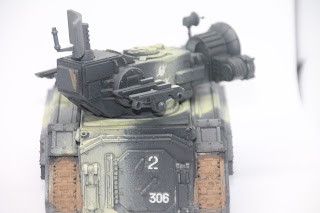 The kill markings and Defence of Hades Hive Star are all visible in these shots. 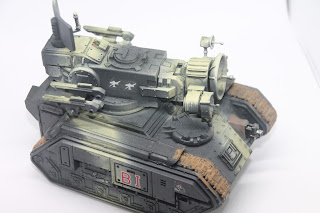 You can make out the cable bundles on the roof. 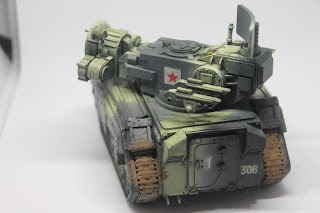 The arabic numerals on the back doors should match the roman numeral tac markings on the sides. 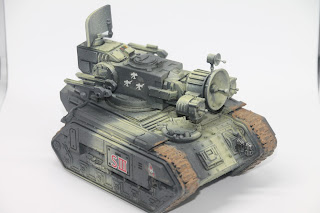 Hopefully, more soon.  Another evening on these and they'll be further ahead than most of the DKK vehicle fleet. 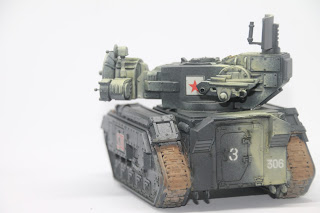