I found these jetbike conversions.

My spanish stretches to cerzeva and perhaps cuidad imperiale, so I can't tell you any more, but they certainly look the part.

And these bad boys make me want to buy even more Wraith Lords. You can have too many Wraith Lords, as it implies that all of your exarchs are dead. But a couple more, if they are posed like these, would be a fine addition:

This is just brilliant:

As is this: Proof that investment in plasticard is worthwhile.

And these ideas from Warpstoneflux are brilliant.

http://warpstoneflux.blogspot.com/2010/12/secondary-missions.html
Posted by Zzzzzz at 09:01 No comments:

Supreme Commander Imperial Forces on Devos IV, By appointment of the Lords Militant of the Obscura Sector.

General (1st Class) Zhukov is an old school Vostroyan military man. Blue blooded himself, Spireborn, his father purchased his first commission. He still passionately believes in the purchase system as a way of ensuring that the Imperial Guard is run by the right sort of officer. For him, being in the Imperial Guard, being one of the Firstborn, being Vostoryan even, is a privilege. His military career is unsullied with service with any other formation other than Vostroyans. He has followed a perfectly normal recognised route for a Vostroyan officer, buying each successive commission (partly financed by selling the old one) culminating in recent command of 388th Battle Group by way of a staff appointment (head of internal security) for Lord General Potemkin on Agripinna. These last two were appointments by Lord General Potemkin (and therefore, by extension, by the Lords Militant themselves). He did not have to pay for them, as they are Imperial Guard appointments, not ones within the Vostroyan regimental system.
Although he no longer needs it, he has retained his Colonel’s command of the 8th Vostroyan First Born Grenadier Regiment. All of the subordinate commissions therein and the shenanigans around them are his plaything. He can dispense or withhold his favour as he sees fit. This is his right as the commanding officer, someone who has played the Vostroyan promotions game and spent an awful lot of money. He has indirectly spent his entire career making those like Lord General Potemkin even more wealthy. If an officer of the 8th Vostroyan First Born Grenadiers falls in battle or otherwise dies on active service, his commission reverts to the Regiment (ie to Zhukov). The dead man’s next of kin do not get to sell on the commission, Zhukov does. And he has volunteered them for service in the hottest war zones available.
The command headquarters of 72nd Army Group revolves around the cult of personality. The General is the star about which his staff officers orbit, sometimes in favour, sometimes out. Fully aware of the effect that the coming of the Imperial Guard brings to a world, he allows (some would say encourages) his underlings to make the most of their privileged position. Lechery and Larceny are the order of the day for some of his staff officers. If court red handed (or if important locals complain) they might be reprimanded. But the general reminds his commissars’ that for the Imperial Guard to be sent to a world in the first place, that world requires corrective action and that therefore, to a certain extent, they are all fair game. Also, especially for the Vostroyans, campaigns such as this are an opportunity to acquire enough of a personal fortune to purchase one’s next promotion.
General (1st Class) Zhukov’s attitude to his own worth to the Departmento (ie his position in history) is easily discerned by his dealing with the Lady Inquistrix of the Ordo Hereticus. He referred her straight to General (2nd Class) Tolstoy, citing that man’s command of the only combat formation available as the reason she should deal with him directly. He will keep his subordinates waiting if he can; it reminds them who is in charge. He is also apt to forget that he has said or agreed to something. If it can be proved or is otherwise incontrovertible, he will explain that what was understood was not actually what he meant and the fault lies with the other party, not with him.
General (1st Class) Zhukov is not happy that he doesn’t have a dozen such battle groups to throw at the enemy. He wants to “crush with tanks, pound with artillery and bayonet with infantry” the enemies of the imperium. The paucity of forces available has left him content to sit and wait until he gets the forces that he thinks he needs to complete the task. He has learned very little about Devos IV since he arrived, spending hours each day pouring over the responses to his requisition orders. All for more fighting men to increase his chances of glory, rather than force multipliers that would be useful to 17 Battle Group.
Posted by Zzzzzz at 09:05 No comments: 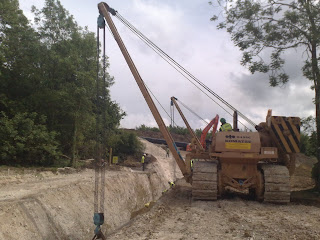 (picture of sidebooms lowering 48" pipe into its trench. One of the better moments of the last three years)

Once again struck by the awfulness of being made redundant juxtaposed against being free of 'not be best employer I have ever worked for'. And the desire to have some time to walk the dogs, paint little men, get my 10K time back down below 40 minutes and my climbing grade back up to HVS (maybe about 5.9 for those of you in the US). Against this is the desire to get back into work and actually further my career (hard to believe, but when I'm doing well or feel that I'm getting somewhere, I do actually enjoy my work, just don't tell anyone eh ?)

PS, Yes Admiral D, they are my DKK, my apologies for not repsonding earlier, only recently caught your question.
Posted by Zzzzzz at 20:31 4 comments:

Within the Ministorium there are many orders and disciples who value human life, believing it to be sacred to the immortal emperor of mankind. One such organization, the starfaring missionary cult known as the Tree of Man, preaches peace and an end to war. Those who die quietly in bed after helping a community avoiding conflicts that involve human deaths are escorted to the emperor’s Hall of Deliberation by beautiful beings on pegasusi.
The order’s militancy is reserved for xenos, with every member taking a holy vow to cleanse the galaxy of all foul xenos, using the emporer’s holy flame (and any other weapon that falls to hand). As can be imagined, this is a difficult goal and many holy men go to extremes to ensure their place in that heaven.
For example:
They go vegetarian and walk everywhere to avoid hurting animals.
Are exceedingly polite to avoid raising someone's ire.
Shout "Forgive!" as they strike another human in combat.
Develop Machiavellian strategies to keep communities politically and financially motivated to find a peaceful solution to their problems.

On Devos IV, Monk Sven Jharden had no other choice but to face Shatter Fang, chieftain of the Oolong, a large tribe of pastoralists, in a champions duel. The Oolong were a large Grox herding concern and had assimilated other Grox herding tribes in southern Benq. The predicted outcome was that Shatter Fang would eventually gain a strangle hold on the supply of protein into the planet’s only hive, San Cantor. He had a bad experience therein during his formative years and was known to have sworn a personal oath to bring the place down.
Monk Jharden, on the planet to defend the population from the indigenous Eldar population on Devos XII, found that the far greater threat to human life was the threatened conflict between the Grox herding majority of the population and the smaller but more organized and technologically advanced urbanites. So he set off, following local customs, to fight his way through the ranks of the Oolong until he faced Shatter Fang.
The monk had already spared many lives by forcing the chieftain into an honorable duel, but to seal the deal, he needed to win the combat. Knowing that he needed every skill he could muster, he doubted that he could hold back. He feared for his immortal soul for the amount of pain and perhaps death he might inflict. The night before, Jharden prayed to the emperor and petitioned the ancestor spirits in the Hall of Deliberation for a weapon that could subdue such a ferocious opponent.
Filled with faith, he went on towards victory on the dueling field and forged a lasting peace between two disparate cultures.
The Ministorium delegation accompanying 73rd Army Group has largely been drawn from the ‘Tree of Man’. The delegation is led by Bishop Popper. He has fourteen Brothers under holy orders and fifty two lay preachers with him. The fourteen Brothers are a mixture of administrators and combat teachers, allowing the Bishop to concentrate on helping the Generals to appreciate the Ministorium’s (and therefore the Emperor’s) policies on Devos IV. And to ensure that the lay preachers are ready to accompany the 73rd Army Group’s units into battle.
The Oolong were effectively cleansed as a tribe from the Benq population. Oolong has passed into the local dialect as a word for Rough Riders; in modern military parlance, Rough Rider formations within the PDF are referred to as Oolong units.
There is a shrine to St Jharden, but on the continent of Acer, rather than Benq. On Benq, revisionist historians have recently been portraying Jharden as an off world meddler in other people’s affairs. He is said to have slaughtered his way through to Shatter Fang, before butchering the old statesman, who was only trying to get a fair market price for Grox meat for all of the herding peoples of southern Benq.
The Ordo Hereticus has made sure that so far, Bishop Popper remains ignorant of the blasphemous sentiments popular on Benq.
Posted by Zzzzzz at 10:39 No comments: