The rules of acquisition don't count at birthdays and Christmas

Well, not so much 'don't count' as 'can be circumvented'.

So I saw this on TTF http://ttfix.blogspot.co.uk/2017/03/things-from-basement-pavlovs-house.html 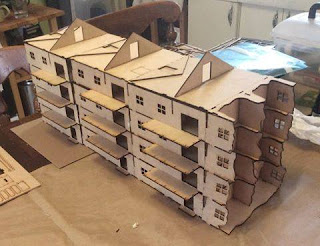 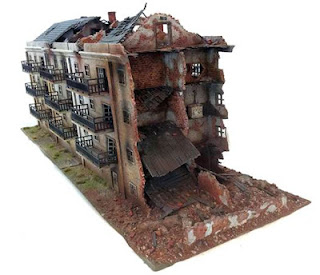 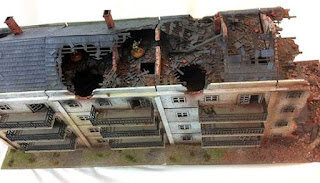 Which is available here http://www.thingsfromthebasement.com/store/p350/Pavlov_House.html  but is so new and shiney that it doesn't yet have a price.

So coupled with the Blackhawk down Target Building: http://gcmini.mybigcommerce.com/28mm-blackhawk-down-target-building-28mmdf085/

And the Stalingrad tank factory: Although my link for this no longer works, it's probably on the bay of Es somewhere. 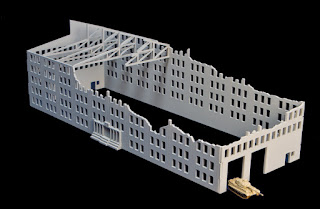 So, that's birthdays and Christmas sorted.  I've got that kickstarter building for my dad to build - he fell of a step ladder at the age of 72 and scared the bejesus out of all of us.  Fortunately he's fine now, so I'll be press ganging him soon.  Just my need for ten Chimerae left to sort. 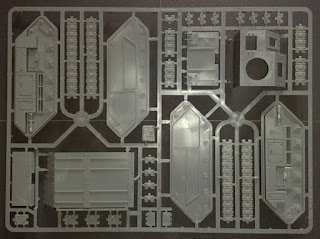 Now these used to be available.  But they aren't any more.  Where ever Chimera kits are made these days, they are boxed and sealed before GW get their hands on them, so it's not so much that they won't release them to us; at the moment, they can't.  Apparently.

I know this as I managed to engage the poor guy on the other end of the phone.  He was apologetic and not at all phased by the random request.  I followed up with an email:

I just spoke with a helpful man on your phone line. He suggested written feedback.

What I asked for is nine (9) Chimera Chassis Sprues. These used to be available but apparently arn't any more.

Nine bagged Chimera Chassis Sprues + Postage would likely be a ball park cost of £100. Nine boxed Chimera Kits + Postage would be well over twice that and leave me with a pile of bits I don't really need. So we'd be savin' the planet an' all that, as well as money.


And several hours later, I had a reply:

Thanks for the email.

That is some good thinking! I will pass it over to the guys who decide which kits get broken up how etc, and see if there is anything we could put into the pipeline.

So there you go. Hopefully at some point in the near future these will be available again.  If you are a Guard player and think that you might ever want to make one of the kits pictured below (or anything like them) them now might be a good time to email Lydia's compadres at that eddress and let them know that flogging Chimera Chassis Sprues is a good idea.  Jus' sayin'

And now picts of chimera based kits.  Not necessarily "Just because", but also to illustrate why someone might want a Chimera Chassis sprue without the rest of the kit: 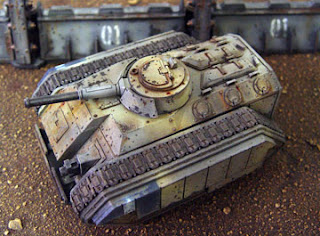 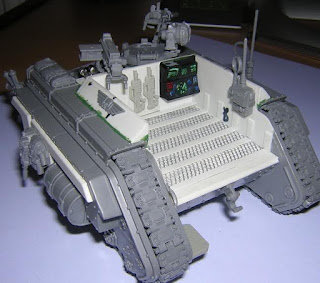 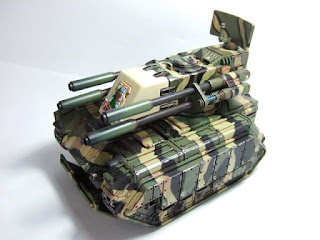 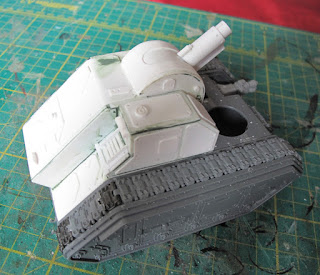 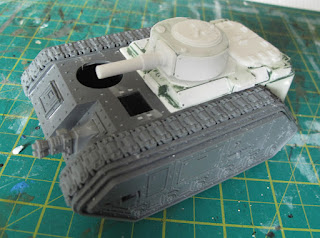 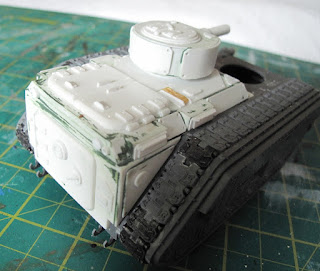 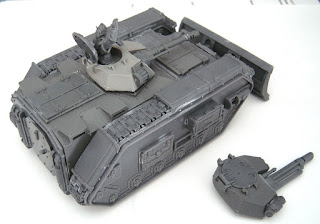 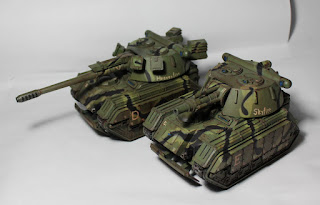 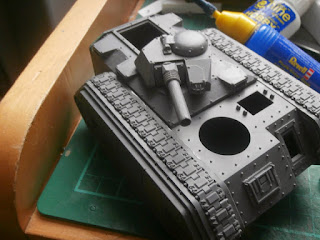 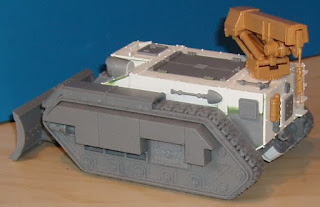 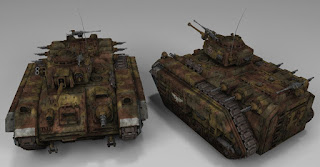 You'll also note that for this year I have posted a running total of expenditure widget for the year in the sidebars.  This is mostly to enable me to keep a handle on it.  One cannot reasonable expect to control something which one does not measure.  So this is me measuring it properly for once.  The rules of acquisition haven't changed (so the Vampyrum SAM launchers, like the above picture, are a broken rule), so hopefully this increased visibility/total disclosure will see me a little more in control by the end of the year.
Posted by Zzzzzz at 01:30 2 comments: 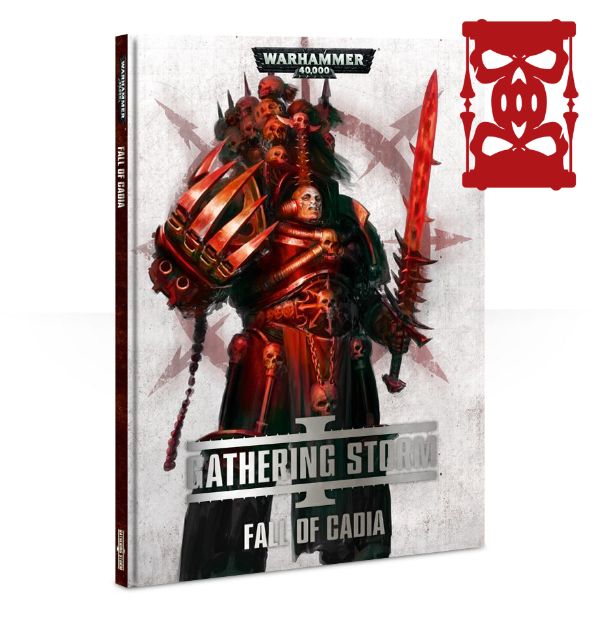 Let's address the production values bit first:  The Horus Heresy books are being knocked out for anything from £70 to £90ish.  These are high end art.  If you go to a a bookshop which does High End fine arts books and find something with comparable production values then the FW books actually don't seem too bad in terms of cash price.

But the hardbacked mainstream GW Codices, whilst lavishly illustrated on quality paperstock etc do seem to be a slightly cynical way of cashing in.  The older softbacked books were perfectly adequate for a table top wargame.  And quite frankly, if the rate of issue and re-issue is just going to continue to rise then surely going the other way, making the product more accessible as the rate of refresh accelerates would be better for the customer (and hence long term better for the producer ?)

I'll point you to Bolt Action - Admiral Drax recently showed me a book he'd picked up which seemed beautifully produced, illustrated and laid out and was immediately engaging and certainly up to the job of being a wargaming rule book.  Like the older codices.  Go figure. 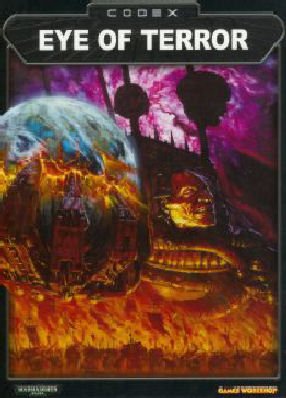 So we are supposed to accept that the events in the new book run directly on from the events in the 2003 book.  And to fair, all of the elements are there: the various SM Chapters are represented; the Imperial Guard appear to have been thinned down to a few Cadian formations, which is disappointing.  Name checking different Guard formations always raises a smile here, one of the best bits of EoT is the list of units on each side, which in itself spawned more then one thread of fluff which we all now know and love etc.

In the new book the writing centres around the three new character pieces which, in as much as any 40K character ever can be, are adequately brought to life in furtherance of the narrative.  A diminishing cast of SM Characters are given bit roles.  Which is a subject for a whole new post.  The narrative itself is obviously a scene setter for some future development in the 40K canon (I hope that wasn't a spoiler).

Did I enjoy it ?  Not really - the battles are all huge cataclysmic events where no one on either side ever seems to need to reload, run out of loo roll, catch 40 winks or display any other Maslowian frailty, the like of which we know actually wins and looses wars.  I know that that its just a game and that that game is a piece exchange table top game of over the top heroes and gribbly beasts.  But.  It's contextual basis is a human society, albeit hopelessly distopian.

So one or two lines where the defenders retreat to the under ground, sub pylon catacombs where they rest and re-arm and behave like a beleaguered army would have that little bit of depth - similarly having a line about the vast hordes of renegades scavenging the ruins for food (which the Black Crusade did not bring with them because they don't care that their minions starve) instead of actually assaulting the Imperial positions would also have added depth, character and believablity to what is otherwise quite a dry account of events.

That the Eldar wait until the last Imperial Forces are not a threat to them before effecting a rescue is entirely consistent, bravo !

There is a clear purpose and intent to both of these books - the EoT book introduced the Cadian Shock Troops and Kasarkin AND gave a background and reason d'etre for people to use their existing Imperial, chaos and Eldar armies - it provided a pattern for the few years of 'world campaigns' which followed on from this, Medusa V et al.  What it left out was as important as what it included.  It was clearly inspiration for gamers and hobbyists.  Inspiration derived from a few lists and half a dozen tenuously connected pieces of prose which might not have written specifically for this publication, just include because they were good (?)

The fall of Cadia book does more and different things - it advances the entire 40K narrative - the Eldar get a new god, the Imperium get a Primarch and Chaos actually win something.  Making all of those previously random Black Crusades be about destroying the pylons is an interesting maguffin to explain the apparent waste of the last 10000 years by Abaddon and his homies.  And of course it promotes sales of the three new Character models as well as the armies mentioned therein.  And I think that's how the book reads - it was written with these purposes in mind - if you have a Dark Angel, Imperial Fist or Black Templar army then this book gives you immediate licence to be involved.  If you wanted an excuse to start a Mechanicum army, here it is.  Excetera for the other armies mentioned.

So I think this is reason that the book is a bit flat, ever so slightly missing the viscerality of that piece from EoT where the Commissar is talking about training with a Cadian Youth Army Platoon or the Aspect Warrior goes into the Avatar Chamber and does not come out again.  The 'whole narrative' thingy feels forced in a way that the previously stand alone articles within the older books did not.