Can you tell what it is yet ? 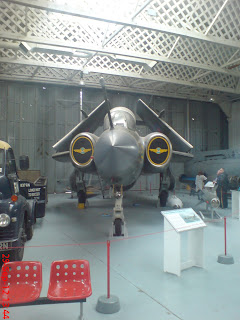 When the ROK fell crashed into the San Cantor Hive some 800 years ago, along with the other damage, a lot of the forwarned population were already evacuating the habs.  Thus the death toll was lower than otherwise might have been, but the noise and pressure wave were immense.

By the end of that war, the continent of Benq was still left with between 400% and 500% of the usual deaf population for the number of persons on the planet.  One of the main focii of the resulting efforts of the Ecclesiasty was returning these persons to a useful role in society.  This was aided by the large mechanicum presence and many persons with augments went on to do many good things.

That was eight centuries ago; the association between the deaf and the church persisted a long time and with the churches involvement in births, deaths and marriages, somewhere along the line 'deaf' was misheard.  Or perhaps willfully transcripted incorrectly.  On Devos IV there are a number of shrines to the Cult Imperialis; those run by the Sororitas inevitably have a cadre of assasins. 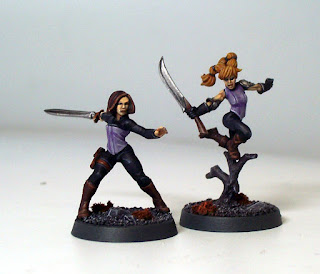 Thus there are any number of Death Cult cells, active and dormant, across Benq and Acer.  Like their mother shrines, some of these remain in the Emperor's Light and some have gone over to the enemy.  Given the predeliction of soldiers to fraternise and philander, these could well become a decisive factor in the coming campaign.

These ladies are Hasslefree.  Paint by Golem.

Formerly the planetry governor's household guard, the 2nd Inf Regt was expanded in the reforms that General Horpan carried out when he returned to his home planet.  It's Battalions were spread across 1 Benq Div's Brigade Combat Teams.

Like some other Devos IV PDF units, the 2nd believes that it can trace an unbroken lineage to the Ad Mech auxillia of Devos IV's ancient history.  The regiment used to have a number of robots and servitors.  These may well have been 800 years old and were really of questionable military value, demanding huge resources for relatively low availability.   They were phased out as a part of the reforms.

One thing that has survived is that some squads throughout the regiment are armed with the fabled RTB01 pattern bolt guns.   Phenominally over complex as the ammunition feed runs from the magazine back down the receiver to the firing chamber.  The sop to 2nd Regt for the loss of the mecha is their elite status amongst the PDF, providing an honour guard for the governor whenever one is required.  Indeed, the 3rd Brigade Combat Team of 1 Div is called "The Patriots".

The Regiment has been torn apart by the rebellion; 17 Korps has 2nd Regt on its books as a part of 902rd Inf Div, along with the other units present on Devos IV at the start of the rebellion; the Cadian 144th LRRR and the Preatorian 5th.  How many of each of these units is actually left (indeed, how many remain within the emperor's light and how many, if any, are now a part of the rebellion) will surely have an impact.

Thanks to Mr Lee for the updated paint job.

Also, in other news, my Dreamforge kickstarter thingy is all done and I should get the first bits before Chrimbo.  And then some more in March and the final lot in May next year.  Although the whole lot will be embargoed by HMRC.  Such is the way of things.
Posted by Zzzzzz at 04:48 6 comments: 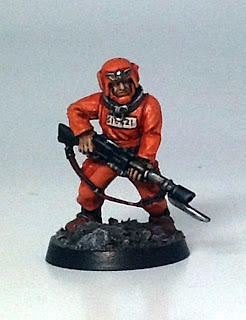 Discipline in the Imperial Guard is harsh and swift.  Even those administering it sometimes hestiate to call it justice.  It is the stick with which the Guard is beaten, with the promise of the carrot; mustering out on a 'trophy world' usually years if not decades away.  Crimes against the emperor (directly) ie heresy are almost always punishable by excommunication, which of course automatically makes the convicted a heretic and therefore a legitimate military target.  Crimes against good order and military discipline (Sleeping on guard, striking a superior rank, being 'found wanting' et al) are punishable by summary execution.

Crimes against the local civilian population are very much dependant on that world's relationship with the wider Imperium and the official policy attributing culpability for the Guard's presence thereon.  For instance, on Devos IV at the moment, on the loyal continent of Acer, the population are protected by the full weight of the law, both planetary and military.  On Benq, which is in full rebellion, the population is guilty of rebellion and the presence of the guard there is a punishment for the population as well as having a military imperative.  Whilst the Higher Command will not tolerate any breakdown of discipline, crimes against the person and crimes against property are much less likely to be followed up on.

Given all of that, who are all of those soldiers who find themselves in the penal detachments ?  Those found guilty of crimes against the Departmento Munitorium; theft by false accounting, incompence in storing valuable or perishable items, any unauthorised activity, ie black market activities, running books in regiments where that is not allowed, running a still, smoking in command function offices or other fire regulation infringements, and so on.  When a senior officer falls out with his commander, quite often his staff share his fall from grace, it helps to prove that the punishment is for functional reasons, not just petty interpersonal reasons.

All of the men pictured here are here as a result of investigations into the alleged misdeeds of a Palladian Officer, Wolfgang Darius de la Rontoire-Khol, who has been not only aquitted of all charges, but completly exhonerated by GCM.  For having the audacity to try to implicate an Officer in their crimes, these men, drawn from across the Cadian, Corbanian, Kreig and Palladian Regiments within 17 Korps, have been sentenced to wear the regulation 69a explosive collar.

With apologies to Col Scipio. Figures by Golem Painting Studio.
Posted by Zzzzzz at 13:47 5 comments:

The Devos IV PDF's 99th Regiment has been traced by local historians to having its origins in the Ad Mech forces that were active in the system some 800 years ago.  Exact details are a matter for debate, however it is asserted that the red uniform from which the modern reigment takes its name is due to its origins as an Ad Mech Auxillia.  The Officers of the Regiment still formally dine on the Omnissiah's holy days.

In the recent past, the regiments numbers have been expanded, with a recruiting drive partially driven by the personnality cult surrounding the former Commanding Officer of the regiment, General Horpan.  This has allowed all five battalions to expand from nine to tweleve companies, swelling each battalion to 2760 officers and men, organised into uniform companies of three rifle platoons (of five squads) and a support platoon with the usual direct and indirect assets

Additionally, the Regiment deploys centrally held assets out to battalions on a mission-based system; this could include members of the regimental Psyker Detachment as well as PLA Morale Officers ("enforcers") and attached members of the Internal Security Police (not pictured)
Agents of his most holy Inquisition have identified strongly heretical elements within the regiment's rank and file.  Largely won over by Chaux N'Merci and her libertarian ways, the regiment was the first PDF unit to declare itself a part of her 'People's Libertine Army'.

As a part of the PDF, the Bloodcoats formed the backbone of the 1 Benq Div's 1st Bde Combat team, as well as having Battalions throughout 1 Benq Div and also within 2 'Hunter' Div.  The Devos IV PDF's Bde Combat Teams are generally two Inf Bn, one Armd Bn, one Fd Arty Bn and a Bde Combat Service Support Bn.  This gives these Bde Combat Teams a size comparable to the average IG regiment, but with a more balanced mix of combat assets.

In case you were wondering where I got all of the red paint from, these were done by Mr Lee.  He did them all at once in a phenominally short space of time.  I recommend starting here mad bloke surrenders his life to painting little men and just looking at the very fast stages he goes through to get them from sorry to table top.  All Pictures ripped from his blog without permission (Sorry Mr Lee, but your pics are better than mine).