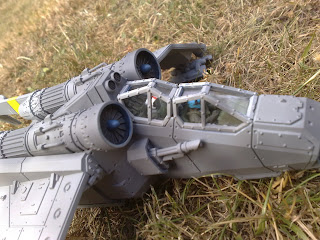 One of 50th Tactical Lift Wing's Valks in Southern Acre.

902nd Inf Bde have conducted their shake out exercises – they are now earnestly training for war in southern Acer. The two infantry Battalions, the Kreig 77th and Kado 540th are practicing combined operations with the Armageddon armoured units and Divisional Artillery. The weather at sea will preclude any opening to the campaign for a few months.
The Cadian 144th LRRR and Devos IV 2nd Regt are on their own on the continent of Benq for the time being.
The Lady Inquisitrix has deployed her assets (including her storm troopers in the Navy’s 50th TLW) across Acer in an attempt to secure the continent for the emperor. Inquisition sleeper cells have been activated by Ordo Hereticus codewords. Satellite establishments from the covent on Benq are the focus of much public attention; the whys and wherefores of the Inquisitorial Intervention are the subject of media interest; The media on Devos IV is freer and a lot less ‘on message’ than it is on a lot of Imperial worlds. Local advice from their in system agents prevents the Ordo Hereticus storming the printers and pict-factors; the public outrage at a massacre of their free media would have more harm than their current solution of ‘guidance counsellors’.
All of the attention on the Inquisitorial mission has left the 17th Battle Group HQ and it’s one combat unit, the 902nd Inf Bde, free to exercise in the deep south. This keeps the local media away from the Imperial Guard and the Death Korps of Krieg away from Acer’s major population centres.
The Departmento Construction Corps despatched with the 73rd Army Group has begun the task of converting the Industrial and Commercial areas of Sandvik into a suitable garrison not only for 902 Bde but also for another possible two brigades to follow. The railroad to the coast (to embark to Benq to fight the enemy) and to the Starport (for supplies and reinforcements) already exists. Other parts of the Labour Corps are spending the winter converting a number of the giant plankton harvesters into vessels suitable for transporting the Imperial Guard across the sea.
In their HQ in the market town of Peltor, 17th Battle Group’s planning is focussed on the winter storms around the southern ocean. Properly timed, the wet fleet can embark 50th TLW from calm seas to drop Storm Troopers to seize the sea ports in anticipation for the landing.
In stately Hakisyke, the astropaths for the 73rd Army Group HQ have heard at last from the Departmento Munitorium. They are to receive reinforcements for another Inf Bde. The new units will form the 901st Inf Bde. They should arrive in system in six months, warp travel notwithstanding.
Posted by Zzzzzz at 22:07