There are no wolves on Fenris 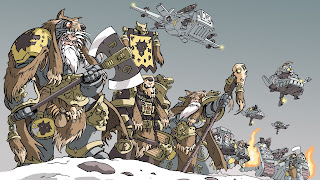 The strike cruiser Skallagrim’s Hammer hung in low orbit around the gas giant.  Smaller heavily armed strike craft were arranged in High Guard around the Great Hunt’s modest seeming fleet.  Heavier mass conveyance craft carrying the Hunt’s heavy armour, workshops, foundries and other support functions queued ready to begin skimming as the astropaths on the strike cruiser prepared to choreograph the delicate ballet of fuel skimming at the sweet spots where local conditions contrived, gravity, weather and so on, making temporary places where the atmosphere was dense enough to make it worth skimming but with a minimum of contaminants.

The Hunt’s passage from Hydraphur towards the Cadian Gate had so far been uneventful, but had now suffered unaccustomed delay, ever since they dropped out of the warp to refuel.
It had been a slow process; for three standard weeks the Hunt’s Rune Priest, his acolytes and the fleet’s astropaths had all been ‘busy’.  Wolf Scouts and sky claws chafed at the inactivity whilst the grey hunters and long fangs seemed to accept the delay with nonchalance unbefitting a true Son of Russ.  But as Wolf Guard Harok had pointed out; they were going nowhere until the Rune Priests were satisfied.

Rune priest Harnvgr jabbed a stubby finger at the Long Range Auspex.  “There.  That one, what does it say ?  ‘Meuven 185’ ?”  He stood up and looked around the crowded bridge at the assembled pack leaders.

“An abomination,”  He began, “A creature out of the warp, held in the materium by dark sorceries, we need to find the deamon and the apostate keeping it here.  Whilst the pack assembles, know this, if we not stop this thing here,” he paused for dramatic effect, meeting the gaze of each of the lords and pack leaders in turn. “The runes have foretold that they will move from here to an agri world in the Devos System and plunge it into a time of darkness, denying it the light of the All Father.”

Keen eyes, bright at the prospect of adding to their sagas, kept their rapt attention on the Rune priest.  “Warn off the wolf scouts, set them on The Spear of Canis and have them find out what they can, the rest of us will follow on in the rest of the fleet as soon as practicable.”
Posted by Zzzzzz at 09:34