A Sequal to this.  Which links to this.

The 11th (Independent) Sareanian Assault Engineer Company was seconded to the Krieg 19th Armoured Regiment for the Taros Campaign.  However neither unit participated in that campaign, being diverted to Devos IV by Spinward Command on Agripinna.

The 11th (Independent) Sareanian Assault Engineer Company is a specialist unit whose task is to clear the battlefield of emplacements and obstacles to an armoured assault by a tank formation.  As such, the “company” is considerably oversized[1]; bridging and demolition assets make up the most of its platoons, along with ground surveying, mapping and minefield clearance detachments.  The Company is kept at 150% of its establishment of officers by the Departmento Munitorium.  The over strength officers are dispatched along the wider formation front to advise formation commanders and get a feeling for where the company’s assets will be needed next.  And of course the intention is that these officers are already on the ground gathering intelligence that the unit will need, should it be required. 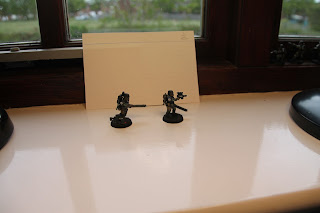 Captain Ernst Schawt is from long serving mining stock from Sarean’s asteroid belt.  Whilst not a hereditary member of the gentry like officers from some places, he is from a wealthy technocrat dynasty. He has been dispatched to the Cadian 127th as they currently do not have any combat engineering support.   He is a qualified civil engineer with eighteen years experience in the Imperial Guard. 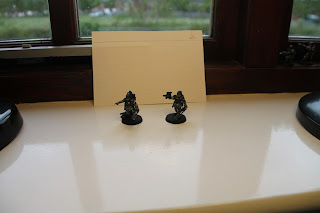 He has taken with him Watchmaster Kluffen, Sappers Griff, Matteus and Kellerman.  Sapper Griff is equipped with a company capacity vox set, to give the detachment the range to communicate with the Company HQ.  Sappers Matteus and Kellerman are toting Melta guns and Capt Schawt and Watchmaster Kluffen are carrying standard guard chainswords.  The Melta guns and chainswords are principally carried for removing obstacles.  Each man carries a lightweight entrenching tool and bayonet obtained from their Krieg hosts.  A lug in the spade blade fits a slotted hole in the bayonet, forming an effective wire cutter. 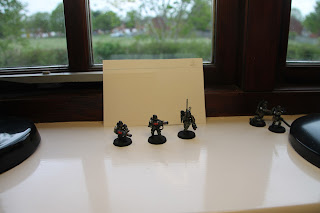 The weapons they carry are standard Kantrel pattern items, fitted with Sareanian x3 low light level sights and underslung 40mm grenade launcher.  These items were developed for the Sareanian Light Infantry, who were themselves an offshoot of the Assault Engineer Companies.  Capt Schawt has fitted a sight unit to his las pistol.

IRL:  These are some of the better paint jobs I've managed in the last eighteen years and I'm loathe to let them go.  But go they must.  It's just a bit frustrating that my super canon EOS appears to take pictures of no better quality (of minis) than my Ericsson K810i.  Must need a new macro lense for small thingies...  I hope the piccies click up to allow some degree of magnification.

The warrior now (Thu 09 May) has decals on it and is awaiting a pin wash.
[1] The Company is referred to as such because it was originally a company of four platoons.  However, such is the demand for their services that the Company is now eighteen platoons based around what are loosely referred to as Battlefield Intelligence (recce, mapping, surveying and covert observation), Makum (Bridging, field fortifications, roads and drainage) and Assault (obstacle clearance [incl minefields], demolition and dynamic entry).
Posted by Zzzzzz at 14:16