Sisters are doin' it for themselves 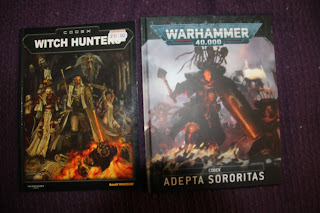 You've heard me before, waxing lyrical about the old softback codices, with their prose vignettes and their 5ed (-1/+1) charm.  And you can see from the price, that these were £12 each when they were current.  The 9ed Adepta Sororitas Codex was £33ish.  I'm not sure if what was £12 in the early 2000s is £33 twenty years later, but as we have discussed before, the world has moved on and even the people who work for GW have bills to pay (and shareholders to satisfy in a way they didn't twenty years ago)

So meh, the production values are better and more work has gone into it, but I'm not sure about creativity.  Maybe.  What this new book appears to have done is take all of the nunneries mentioned in the old book and fleshed them out.  This has been done in the most direct and least surprising way, but it has been done.  It's nice that the background has been built upon and expanded in a logical and sympathetic way, instead of being overtaken by a burst of hyperbole and ruined by covering it in skulls and more guns than it can carry ammunition for.  Ahem. 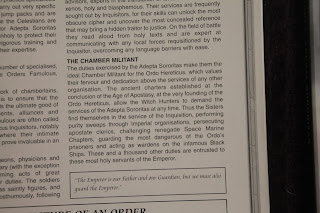 So by way of contrast, I offer up these two roughly corresponding paragraphs from the old (above) and new (below) publications.  What the new codex does is to squarely plant them as a faction in their own right (like the Ad Mech) in the new starting line up.  Whereas historically they have perhaps been under the wing of the church and the OH (even if the OH were actually using them to watch the church), the new edition has them out there being the driving force behind wars of faith and then has the OH standing around watching that wars of faith do not exceed their remit.  Exactly how one or even a handfull of Inquisitors is supposed to stop of war (harsh language ?) once its started* is not explained.  I think I prefer the version where the SoB are more or less the chamber militant of the OH, rather than the new one where they are making war on their own behest.  Of course, for once, it's been carefully written not to contradict the earlier version; if only they had been so careful with the rest of the 40K corpus. 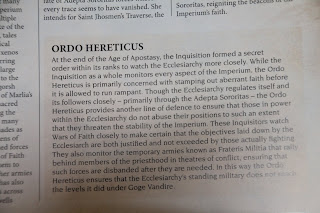 The Obvious pointers are that the old codex is entitled "Witch Hunters" and the basic option was (is) to build your army around an inquisitor and his/her retinue, with added Iggies, ISTs, SoBs and/or Space Marines.   This new codex is about fielding an SoB army; there is a large new mini range to shift and we don't want to be giving the spending public the idea that they might be using a significant part of their existing collection, when the codex can specify some neat all new SoB options.  It's the current world we live in; I don't begrudge GW their commerce - all the people I might face over the table are likely to be ok with 5ed and an iggy command squad of Straken and four heavy flamers because that game is going to run like a Bruckheimer movie - we are not the target audience anymore.

So an overall thumbs up from me, which is a first for these GW hardbacks.  And of course, as I've reverted to 5ed for all gaming, most of the rules stuff means bugger all to me, but some can be shoe horned in for thematic reasons.