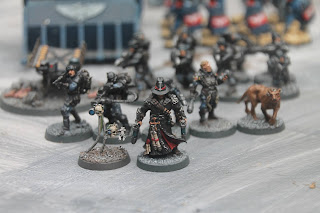 This is Inquisitor Readsel, who along with his core team has already been detailed here.  His paint was done by PVP https://piratevikingpainting.blogspot.com/2014/07/inquisitor-dredd.html  Of all of the Inquisitors who serve the Conclave of Dinterra Minor, he is the one who will take the time to get the best use out of local resources. 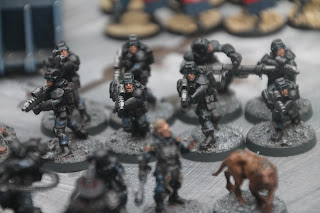 And in order to further his purposes on Devos IV he's more of less tied the Inquisitorial SWAT team to his retinue.  They have already been detailed here.  Their paint was also done by PVP https://piratevikingpainting.blogspot.com/2014/03/whatcha-gonna-do-when-they-come-for-you.html 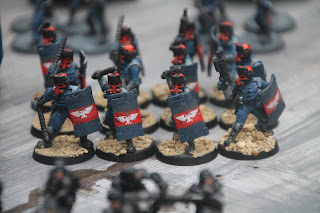 These are the local Arbities, shields, shotguns and shock batons.  And a poor sense of humour and a readiness to move to direct action sooner rather than later. 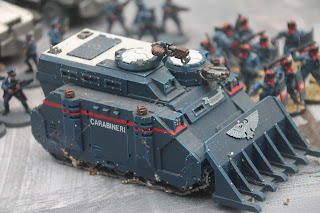 And they ride around in this.  Because what sends a better message to the proletariat than their police having an actual tank called a "Repressor".  But of course these things are valuable resource and not the usual sort of thing people see unless they are really unlucky.  The paint here was by Golem. 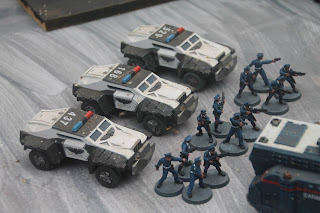 And here are three Police Cruisers.  These do protect and serve, but let's not forget that they protect and serve the Imperium of Man, not the people who live in it.  Expecting trouble, when the call comes from the Inquisition, they fill the Cruisers with flatfoots.  The paint on the police cars and policemen was by Golem.