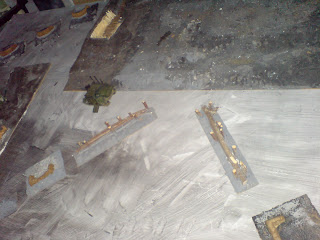 The forces of the Empire have landed at Randstad, a port on the western seaboard of Benq. The port and main road inland are overlooked by a series of hills known locally as the Nolag Hieghts. The area contains many prepared positions and supply caches for the PDF set in case of planetary invasion.

The 72AG (ie 17 Div, as that is all there is) sends F Coy Cadian 2/24 to agressively patrol the Hieghts, to ensure that any future advance won't be overlooked by hostile eyes. Or Artillery, for that matter. A detachment of the elite Arcomet 877th rotates into 901 Bde's QRF. Col Stirling, being the kind of man he is, sends his Recce Platoon out to keep an eye on the Cadians and give his QRF as much advance warning as possible. 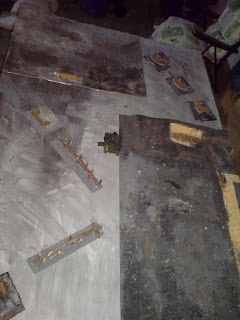 What you see here in various views is the table with no bodies on it. You can see the trench system, Arty Posn(s) and the anti vehcile barriers. The whole ridge line looks like this, some eight Kloms.

The PDF's dickers see the Cadians advancing into the hills and report this to their leaders. The PLA are worried that the Imperium is going to find the command post with the encrypted cogitators and aim to cut the Cadians off in a pincer movement. Elements of 13th Mech ('Tigers') and 99th Foot ('Bloodcoats') set off. 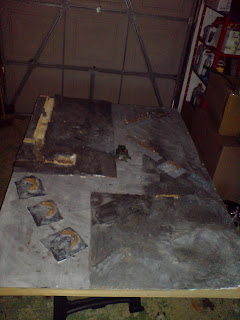 So there was a 400 point Combat Patrol game with the Cadians (Admiral Drax), Arcomet (Karitas), Tigers (Zzzzz) and Bloodcoats (Soviet Space). The Objective, such as it was, is the abandoned PLA Command Post AFV in the centre of the board. The Cadians started in the trench line. An Arcomet sniper team hid itself in one of the snadbagged emplacements. The Tigers attacked the Cadian position from the Arty Posn and the Bloodcoats established their gunline between the objective and the anti vehicle barriers.

Lt Woolpack, Commanding No 3 Platoon, quickly assessed the situation and decided to dislodge the heretics from the hill top. He bravely defended the trench as he sent his brave boys over the top to march down hill, bayonets fixed and power cells ejected, towards the waiting bloodcoat heavy stubber and mortar defended Bloodcoats.

No 3 Platoon's own supporting mortars were soon in action, during the ensuing firefight, Cadian sergeants handed out buckshee power packs and the Bloodcoats got the worst of it. There wasn't really much of a let up for the Bloodcoats when a squad of Tigers "hut, hut, hut'd" their way into the HW dugout and saw off all of the Cadian HW teams, only to then go down in long drawn out melee with Lt Woolpack's command team.

The Arcomet snipers had another Tiger squad in their sights. They had already called for back up and could have let the squad go straight past, but the men of Arcomet are made from sterner stuff and three guys with sniper rifles elected to take on ten Tigers at well within charge range. Fortunately for the Tigers, these men of Arcomet had been hitting the hard stuff all morning and only got one of them. Unfortunately for the Tiger squad, they were quickly flanked by one of F Coy's sentinals, which promptly began to toast the Tigers.

The Tigers veteran Sergeant Harphur Scrambled to the top of one of the Arty emplacements and, firing a heavy bolter from the hip, imobilised the sentinal. Everything was still hanging in the balance, the Bloodcoats Coy Cmd squad was still in action, although their Plt Cmd Sqd was still pinned following and earlier mortar barrage.

The Arcomet QRF arrived, Valkyre screaming over the hill top at less than ten meters. A slavo of rockets rippled into the heretics. Incredibly, Harphur jumped off the high point he was on and into cover. A squad of Arcomet Drop troops engaged the Tiger cmd sqd holding the Arty Posn. Another squad of Arcoment Stormies landed next to the Command Post vehicle.

A few minutes later, the hilltop belonged to the Imperium.

Huge thanks to the guys for turning up. Esp Sov for keeping us chipping along and not getting bogged down. More later. There was another battle after this, a consequence of the action on the Hieghts.
Posted by Zzzzzz at 18:26