There are competent staff officers in 72AG.  And politically aware officers.  Ones with a clue.  Which is all well and good, because their leader's pro-civilities are not the stuff of great alliances and super performing teams of enfranchised executives.  However, the smart people he does have are enough to not only keep him out of trouble, but actually make him look good. 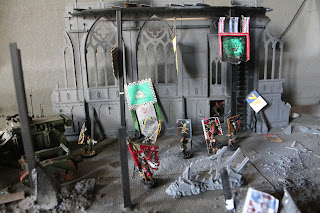 4* Gen Zhukov has travelled to Randstad for a medal parade.  Lieutenant Olympus Serverous is to receive his Captaincy and his platoon the Aqilla Mundanis for an action last month in which they captured a witch, who was subsequently handed over to the Ordo Hereticus in one piece.  This selfless example of martial prowess is nothing extraordinary for the regiments of 17 Korps who have been prosecuting 4* Gen Zhukov's war unsupported for six months.  The sort of barrack room chat that the Commissars are keeping a lid on is that the promotion is for giving 4* Gen Zhukov the excuse for a parade and the Aqilla Mundanis is for thawing relations between 72AG and the Ordo Hereticus.  But as noted, Lord Commissar Harris's agents are keeping a tight lid on things.  The promotion and official recognition are for the apprehension of a witch employed by the enemy specifically for the purpose of using the dark arts against the Emperor's soldiers, a step change in the conduct of the war.

The pict-captures show the standard bearers of 17 Korps assembling in the ruins of "Backroad Farm Basillica", which was itself destroyed by a baneblade explosion at the climax to the Battle of Freeman's Square.  Banners of past defenders of the Devos System and those of defeated foes can be seen amidst the detritus of war.
Posted by Zzzzzz at 16:59