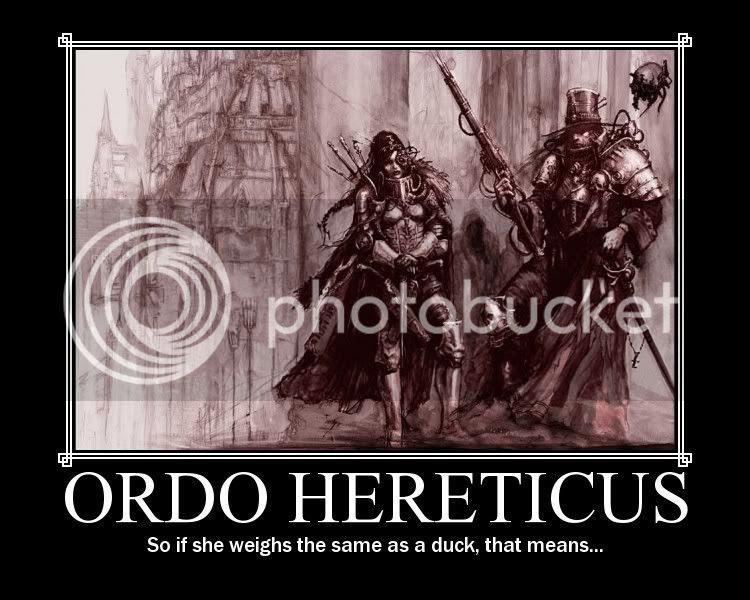 The Conclave of Dinterra Minor is a subordinate branch of the Ordos Kelestor.  The Conclave is responsible for coordinating the activities of the Holy Ordos between Hydraphur and the Dinorwic Cluster, including administration of collecting the Emperor's Due including the Black Ships and the Gene Tithe of Space Marine Chapters based, stationed, operating or transiting their area of responsibility.

Following the heretical declaration of secession (and execution of Inquisitor Vincorum), provision of asylum for the known witch Apocrypha Quinelle, coup against the Imperial Governor (Maj Gen Marcus Firth III [Cadia]) and denial of the imperial creed*, the inquisition is anxious that the rot does not spread to the rest of the Dinowic Cluster.

Lady Inquisitrix Josephine Hellmwr's network of agents had already been watching Inquisitor Vincorum's pursuit of Apocrypha Quinelle.  The Lady Inquisitrix did not appreciate Inquisitor Vincorum's high handed unsubtle methods. His Mono-dominance is not a problem, but his bombastic style and inability to see anything beyond the obvious has wrecked more than a few ongoing clandestine investigations.

She has positioned this matter in the Conclave's order of business.  The consequence of this is that Conclave lent Inqusitorial support to the Imperial Guard's Kelestor Sub Sector Command's campaign to restore Devos IV to the Imperial fold.  One result of this has been that she has been instructed to take an interest in the campaign.  To this end the Conclave has commissioned the rouge trader Corinthian Summer, under its master, Amicus Falco Darke, and assembled an all volunteer force of Inquisitors to oversee the campaign.  Another has been the re-routing of a detachment of the Legio Astoria to the war zone.

Whilst the Corinthian Summer has been shuttling tank regiments from Agripinna to Devos IV, the Inquisitors have been assembling at Borin Majoris.  One of those coming along, Inquisitor Hallas Blingnor, has close ties to Castellion Brodeep of the Black Templars.  Independently and without letting anyone else know what he was doing, he has asked Castellion Brodeep to meet him at Devos IV. Inquisitor Blingnor was an Interrogator under Inquisitor Vincorum.


In all eight Inquisitors from all three major denominations of Holy Ordos join the Corinthian Summer at Borin Majoris, along with two ecclesiastic representatives. These are Sword Cardinal Pielaide who is a crusading missionary with a writ from the mother church to lead and assist the Synod of St Josephine and Bishop Popper of an order called the Tree of Man, the Ecclesiasty's official programme of religious support for 72AG.

*a catch all offence for anything from minor blasphemy to arson.