The road to Xyphonica starts here.

Fort Nuttar is the official designation for 72AGs staging ground half way across the prairies of central Benq.  The Nuttar is a small bird that feeds on the seed and flocks in great numbers in the vicinity.  You can imagine what the soldiers say.   Staff Officers at sub-ordinate headquarters shake their heads at the wisdom of their superiors.

The hiatus in the war gives time for re-organisation and reinforcement; even without combat, the journey across this relatively benign terrain is still taking its toll on serviceability of tanks and APCs.  Superheavies seem to wear out a little less, but when they do, they are off the road much longer.
Lager points for Divisions are set up radiating out from Corps locations, XVII Korps to the North, XVIII Corps to the South and XXXVIII Corps to the West.   Each is then like a spiders web of haul roads radiating out to the Division Lagers.  Military Provost troops have their time filled by recovered vehicles and stragglers rolling in over the two months and being directed to their appointed place.  For some units, this is the first time they have all been co-located since Operation Tranquillity, over a year ago. 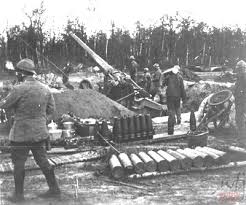 There are some probing attacks by platoon sized formations of PDF Separatists, but nothing to really bother the whole Army Group.   Air assets are concentrated within the boundary of Fort Nuttar itself.  More soldiers jokes about birds of a feather flocking together.    The Navy’s mass conveyors ‘Castlemate’ and ‘Garden of Hiber’ land reinforcements for XXXVIII Corps – The Fantoma 313rd and Harakoni 22nd arrive and the 3rd (Devos IV) Infantry Division becomes 3rd Airmobile Division.   On one level this pleases 4*Gen Zukhov as he now appears to have a massively increased military capability.  But neither regiment arrives with its organic transport.  The problem, like so many others, is passed back to Comptroller Bellormus.

72AGs Headquarters ground appreciation deliberately placed the understrength XXXVIII Corps to the west, back along the route of the railroad.  Using the Airmobile assets that 1st (Airmobile) Division does have, units are deployed to patrol the railroad and ensure security .

72AG Headquarters, half a world away on continental Acer, signs off the travel warrants allowing Ecclesastical and Inquisitorial representatives to travel to the front.   Sword Cardinal Pielaide leads the Synod of St Josephine and a contingent of confessors and lay preachers from the Tree of Man to the front.  Bishop Popper remains on Acer as a guest of Gen Zukhov.

After two months, XVIII Corps, with 23rd Inf Div, led by General Robbeme (Cadia) in the van, prepare to resume the advance.  The route chosen by 3* Gen Romos (Macragge) is through a series of dry valleys running east to west.  These routes are pretty close to bedrock at on the valley floor, promising less dust and harder (ie better for armour) going than the prairie above; but are known to be defended, possibly in depth.  And the PDF has also had two months to reorganise and prepare.
Posted by Zzzzzz at 12:52