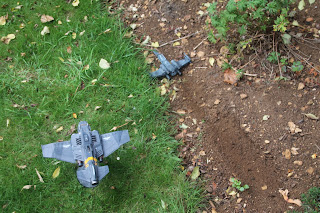 Another separatist T-65 is bounced by Imperial Thunderbolts before it can get away.   Given the law of averages, every time a T-65 launches on a mission the number of Thunderbolts lurking above it does not diminish, whereas the number of separatist airframes does, meaning that as the campaign progresses, the separatist is exponentially less likely to make it home. 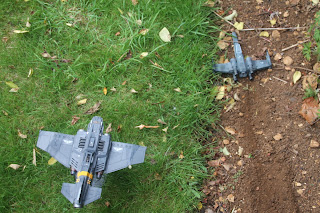 The scar in the ground can clearly be seen where it has crash landed. The picts were taken by the other Thunderbolt.  The pair are quite likely to continue to circle until ground forces arrive to secure the crash site, assuming they don't go 'bingo' during the meantime. 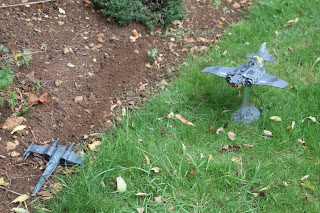 In this instance, it looks like the T-65 is not too badly damaged; assuming that the pilot doesn't manage to destroy it, it may well become a trophy on a plinth at some Imperial base after the war, perhaps.