You may be aware that Vicky Lamb is relaunching her beastmen troops.  This has caught the attention of some you and I said I would find picts of my goats to show you.  Just to be explicit here; these were painted by Mr Lee's Painting Emporium, I just put them together.  And boy, was that a pain in the arse.  Oh well. 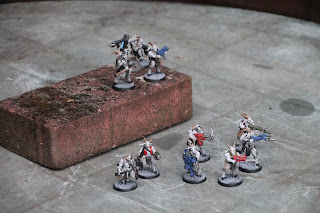 There they all are on the Brick of Scrutiny.  Ten altogether, they make for a decent gang/kill team/whatever.  They're also a nice addition to the Khorny bit of my CSM army.  Although some of you will remember when the Imperial Army included beastmen (and human bombs). 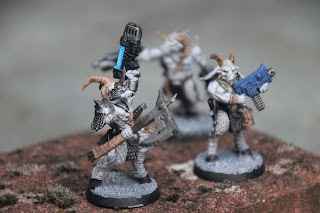 The leader with giant axe and plasma pistol, why not ?  Other guy with stolen Ultra smurf bolter. 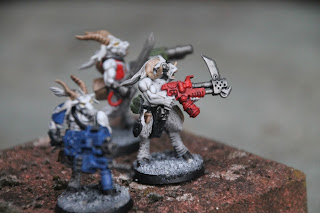 The menagarie; GL (one handed when you're that big) Flamer with CC attachment and HB with UM shoulder pad and additional CC accessory (a flamer !) 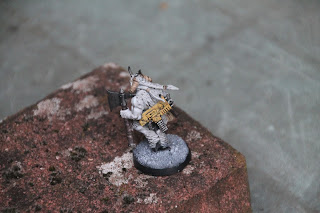 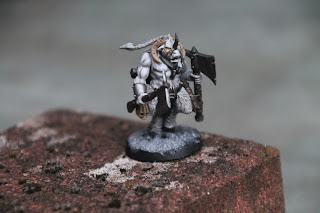 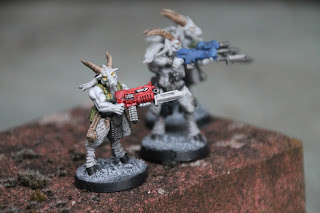 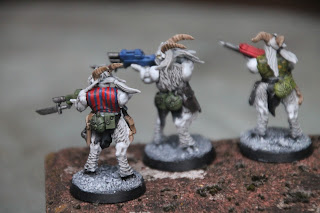 That last goat is wearing a Barcelona shirt.  He doesn't get on with the GL toting goat, who is a Man U supporter.

They are supposed to look like they've looted, stolen and pillaged all their gear from others.  Suitably piratical and so on. They are an excellent fun set and the one time they were used, they were played WYSIWYG, with the HB goat having that one shot flamer and one of the goats having a TL las rifle. But the killer was the one out of focus in the group of three at the top who has a bolter in each hand.  They are tough, strong, aggressive and very killy without the indestructibility of Spayce Mareenz.  What's not to like ?
Posted by Zzzzzz at 01:42