Deploying to the Xyphonica Campaign 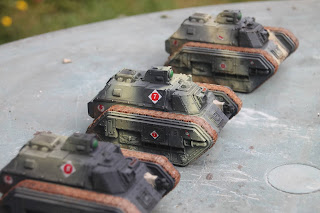 The KCC were landed first, to establish the 3422 AG Headquarters and framework for rest of the Army, the rest of the army was landed and the whole was inducted in to the war and reorg'd for their advance to their TAOR on the eastern edge of Xyphonica.  They would have to advance, at the furthest extent, nearly 1000 kloms around the northern edge of the city to being their phase of the investment.

Time was taken to get things right and make sure that all the preparations were completed thoroughly before the long march began. The lead elements of 569 Div, almost all Hrossy units, under Gen Nevets, were underway as the lead elements of 72 AG were probing the edge of the city after bludgeoning their way through the Battle of Chobi.

569 Div would move into position covering what the Aeronautica Imperialis would refer to as the one o'clock to two o'clock positions around the city.  They would then be responsible for anchoring 3422 AG in the north as the subsequent formations would fall into place as the army surrounded the city down to the eastern bank of the Khoda River as it flows out of the southern edge of the city.

The Sentinels from the 6th and 7th Hjaltland Light Infantry would provide a recce screen moving slightly ahead of and in parellel of the lead elements of the Division, including an armoured spearhead from the 3rd Hellier Tank Bn with various detachments of the Hrossy Yeomanry acting as a form of rolling QRF as the Division moved around the northern edge of the city and into position.

Sergeant second class Nedrub of 3HTB was the commander of a Leman Russ Conqueror:

"We travelled on the newly laid railroad as far as it ran toward the Khoda River crossing north of the city, with 72AG between us and the city.  As we left the rail head we had another day to where the rail bridge was being constructed.  There was a hardcore road for the construction traffic but we were ordered not to use it as the tanks would chew it up, so we tracked on a wide spread through the grass.  The whole area was full of squidgy cavalry; all shapes and sizes, Death Riders, Rough Riders, Mounted Grenadiers, loads of them, constantly patrolling both sides of the river looking for Devosites fleeing the city.

We crossed the river on Departmento ferries.  I was surprised to find the Engineers and Labour Corps there before we were, but there you go, wars are strange things sometimes.  Once over the river we knew that there were no longer friendlies between us and the renegades.  We pressed on passing a gibbet where the cavalry had caught some runners.

We would travel for four days near the rear of the Division, as a packet, with the fitters nearby to carry out major maintenance tasks during halts.   Then we'd take over the spearhead and get ahead of the Division, trying to thrust tens of kloms out in front, seeking and engaging the enemy on the route of march.  The pace was relentless, quite often tanks in the company would drop out and have to wait for the first recovery mechanics to catch up with them.  When we were kids we'd have a steel bath once a week or so to keep us clean for the cadres.  Out here in the field we longed for some kind of cleanliness.

Once we came to an abandoned village about two days ahead of the Division.  The grunts cleared the houses and we found that everything was still on, water, heat, light.  Every man jack there, including the old man and the leash had bath and then we burned the place down.

The first time we met the enemy was at another one of these curious little villages, we were facing the sun and they were dug in and still in shadow, they hit one 'russ, damaging the running gear and also one of the chimera, brewing it up.  Given their advantages, we were surprised that we didn't lose more. I don't remember being scared, just going straight to our training, which for us tank commanders included maintaining control over the crew.   With a troop of Conquerors, we gave them an absolute hail of return fire and the infantry were straight in there.

The ambushes seemed disjointed, they were oddly spaced and appeared disorganised, sometimes there would just be antitank fire sometimes infantry without any antitank weapons and twice without any heavy weapons at all.  By the emperor's grace, good for us; if the war so far had left them short, so much the better." 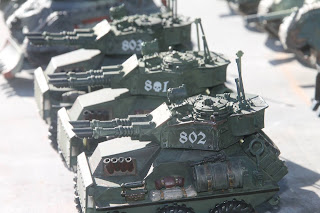