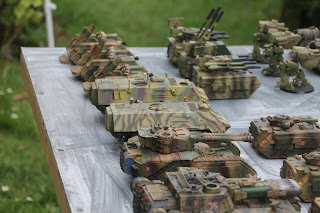 Regular readers will recall that there are two units of DKK represented in my collection; the Blue Krieg, who are exclusively infanteers with some field artillery support and the cunningly named Brown Krieg, who for me have always represented a portion of the DKK 19 Armd Regt, as described at the back of IA1.   For those unfamiliar, the Regt depicted in the Annex of IA1 was effectly an Assault Brigade type formation long before the Vraks series was ever committed to paper.

You can see here part of the Heavy Company (in IA1, they have a Cadian Baneblade subunit attatched, but more DKK is more flufffy so here they are), two of the HQ vehicles and then Griffin and Hydrae Troops (a Troop being three 'guns', two Troops to a Battery) in the background. 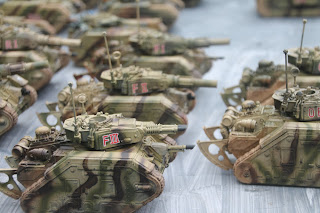 A tank Troop (three Troops + HQ to a Sabre Squadron.  Some nations will use the designation Company or Kompanie for a Tank Squadron.  As if they were infantry, pah !) 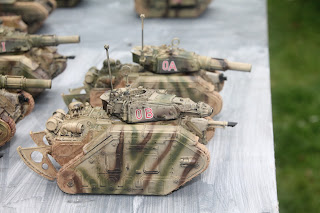 Tank HQ (0A) and 2iC (0B).  Because you might want to split your force or some nasty person might incapacitate 0A. 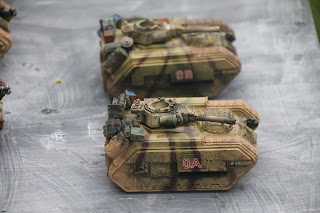 Company Commander and 2iC of the Armoured Infantry company, with the 2iC's wagon there as well. 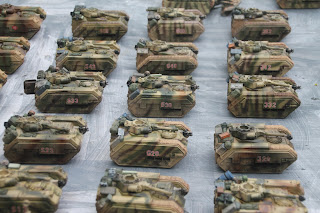 Three Zug's of Armoured Infantry.  Those are all old type chimerae converted to mid-turret by me in 2010ish.  Behind them are another Zug of Capricorn hull mid-turret Chimerae for the Grenadiers.  Litterally Panzer Grenadiers.  All FW turrets. 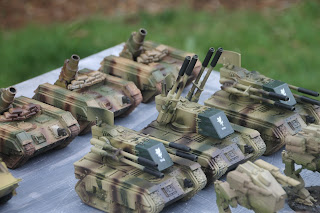 More of the Griffins and Hydrae.  There is another troop of each on the other flank. 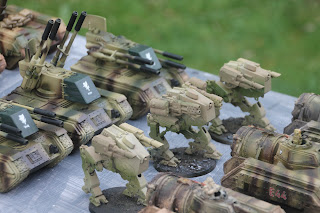 The armoured sentinels.  Because if the DKK are going to run sentinels they should look like rhinocerous heads, not star wars space chickens. They're sat beind the engineering assets because I think they fit in here as a counter attacking unit, rather than anything else; the DKK already have enough idiomatic options for any of the other uses one might find for sentinels. 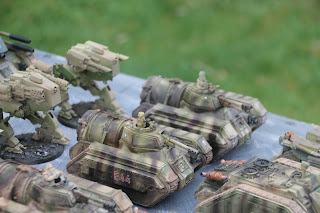 The first engineer assets, a Troop of Hellhounds to deliver that all important 'no thank you' message where needed. 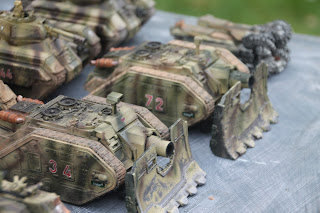 Two of the three Thunderer conversions; I must find the bits for the third one and do that, someday...  You can see there's a small 'Dinpr' marking on each just below the forward track tensioner, just a nod to the detail in IA1, but one I'm quite keen on. 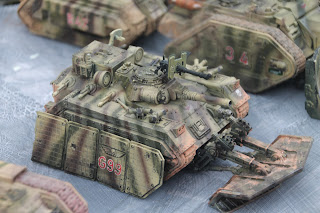 Engineer's Chimera.  They will need more.  There are three cyclops to carry closer to the enemy, so that's another two of these, but future ones are not likely to enjoy the same confection of mine plow, extra armour, roof extension and extra lighting and smoke dischargers.  But we'll see.

They also have the Hades drill currently standing in for the third Tunderer. 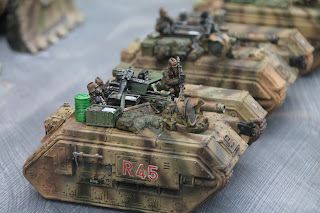 Armoured Recce; two sections of two Salamanders.  Like GA aircraft and VTOL Gunships, Armd Recce assets should work as pairs; one on the target and one moving. There are more recce assets available; my Uhlans (Deathriders) have black uniforms to allow them to deploy with either the blue or the Brown Krieg.

And this is what it looks like.  If you only click on one picture for more detail, make it this one.  i have noticed that most of this has been lanquishing in this condition for a decade.  I've never finished the turrets (crewmen, hatches and pintel weapons) due to issues packing them away.  I think I've got enough space now in the crates dedicated to the DKK, so I might start for on this in the foreseeable future, but there's work to be done and re-done just making good the weathering on some vehicles and replacing stuff already broken.

Also, there's some more baddies for these guys to run over.  As I add this edit (Sat 07 May 22) they arn't on the main GW Kill Team webpage yet, so either get over there or suffer the deadpan delivery from this: