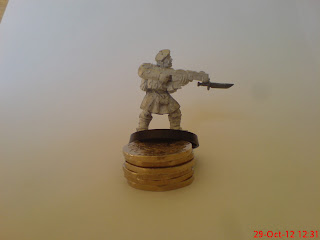 Moss Trooper Doak wears the traditional kilt and Tam’o’shanter of the Drookian disporia scattered throughout the Imperium.  He wears a locally manufactured Flak vest with a body rig carrying his ammunition and personal equipment.  He is armed with the locally manufactured (Hydraphur) G44 assault rifle, a small calibre auto gun with a high rate of fire.  The G44 is equipped with a standard IG Kantrel pattern bayonet, probably scoured from 72 Army Groups stocks.  Additionally he carries a canteen and additional knife as a part of his belt kit. 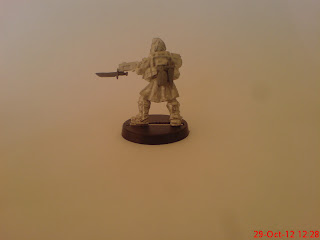 Click the pics for a better view; these are Vicky Lamb kilts and swedes with Pig Iron bodies.  The Bayonet is Cadian and the extra canteen and knife are there to visually tie the torso to the legs as without these, the mini looked distinctly like two random bits, one sat on top of the other.  With these items bridging the gap, Moss Trooper Doak looks a lot more like a single entitiy, rather than a victim of some vaudeville magician.

I have background for the Hulin Rifles, but you'd want to wait for painted minis for that, wouldn't you ?  I though so.
Posted by Zzzzzz at 16:54