Wild Riders. More of them... 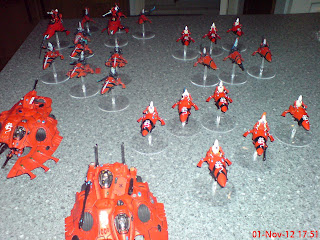 Something to give Space Wolf armies paws for thought (see what I did there ?!?!).  Many of these newer Siam Hainn wild riders have Chapter Mouse parts.  As with Karitas' experience with the Cawmera, I gather there were some fit issues.

This group shot is not complete, as it does not include the Cobra.  Which is still not mounted.  Both of the Cobra(s) really need a short length of fairly substantial acrylic rod (prolly about as thick as your thumb [assuming you have normalish thumbs]) which I'd then use with a couple of those large oval bases used for flyers and MCs.  Must sort that out sometime....

Moving on to the new guys: 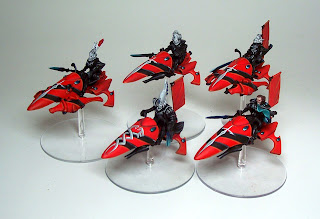 The two with schmanzty outriggers on their EJBs are Farseers.  So that's a six strong EJB Seer Council (these five and the shakespear, below) and another five EJB troops (the two below and the three in fancy hats). 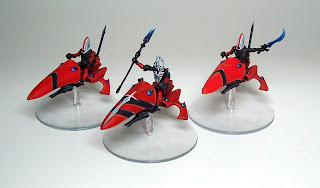 These should expand if you click the pic. (humm, enso's world is rubbing off on me).Of course, the three dudes in fancy hats (below) are zooming about ready to either be extra Seer Council members or another three EJB riders. 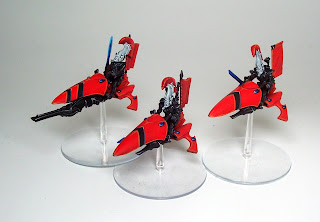 Paint by Golem.   Incidently, Soviet Space, who more or less ran our first Devos IV battles, is back in the country (he had been exile for tax reasons) and more or less local (ie not as far away as everyone else), so I hope to give him a bloody nose soon.  The core of this army once belonged to him. 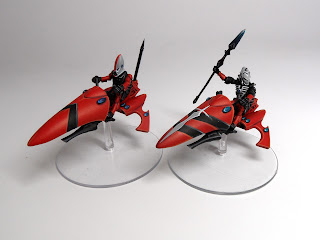