902 Inf Div's vehicles on the start line for their assault on Cudlipp Lines, NW of the Colil Promethium refinery.

Once again this was written watching the news on Mon 28 Jul 13; these pictures are already a couple of weeks old and show some progress.  The camouflage is on and the turret numbers on the tanks (hull numbers on the Chimerae).

The turrets on the DKK Chimerae have all been changed for FW auto cannon to match the Assault Brigade list from IA13.  Hurrah for 5,500 points of legal DKK ! 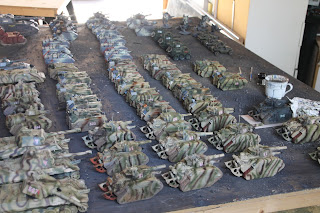 The best solution I found for the tracks was to use the Tamyia weathering stick and some powders.  The experiment with chalk dust and enamel paints was not a failure, but just not as good a result, IMO.  And they are my tanks, so goo sticks it is. 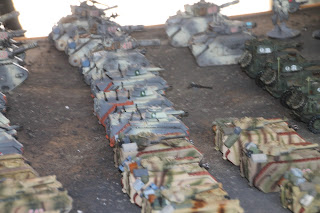 Here we can see the ASL tanks and their accompanying Chimerae, (the grey looking ones at the rear of the picture) with rusty tracks, to reflect their amphibious capacity and their markings. still an ongoing thingy.   I'd thought the ASL tanks were finished, but then compared to the improvements in technique and finish on the DKK vehicles, these also now need a little more love.  I'm not even thinking about the Devos IV PDF tanks. 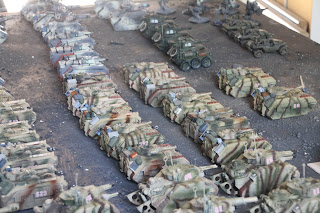 A slightly clear shot of the DKK Chimerae.  The stowage on these has been on once, and then came off because the FW turret has a comms kit bustle at the back.  And then on and off again on six of them for some FW Chimera tracks.  But they look OK ish now - the only thing is that all of my stowage appears to be held on by magic (as opposed to straps, racks, rope or whatever).  I could sort this out, but quite frankly, it's way down my list.

Oh, oh, and, I've been surfin (the interwebs not real surfing, that's too hard - there's no coast for at least two hours from here). And found these http://www.warchimera.com/en_US/p/Tracking-guards-for-transport-vehicle/16  So that might do for a few more IG vehicles, eh ?  certainly a saving over buying another vehicle accessory frame, even with the post from Poland.  It's not just for plumbers, you know.

Incidently Mrs Zzzzz has just discovered that if you ask Siri "Were you in Bross ?" he answers "I can't answer that."  Ahhh, the eighties...
Posted by Zzzzzz at 18:39