There has been another incident in the Randstadt area.  As 18 Corps moves to its assembly area for its assault on the Colil Promethium Refinery area, there is a corresponding surge in insurgent activity. The various units of 17 Korps are called upon to suppress this activity.  Tactics are developed, both those using 17 Korps units as bait and/or diversions (notably 905 Inf Div, who seem to have a knack for attracting attention).  And also QRF activities using available assets.

Previously, these airborne QRF have always seemed to arrive too late to have any real effect.  Stratigae* in 72AG argue that the effect is to limit any insurgency act to the airborne QRF's reaction time or less.  This is generally held to be about eight minutes.  Whilst this has undoubtedly dissuaded many cultists from launching large scale actions, eight minutes is still plenty of time for a brief gun battle and dispersal.

Colonel Commandant Welbann (902 Inf Div) has presented 3* Gen Tolstoy (17 Korps) with an alternative.  Elements of 5th Saranian Light Infantry are airlifted in and allowed to run S&D missions using their own SOPs and resources.  This has been proving to be very effective within 902 Inf Div's TAOR, largely due to the high professional standards of the Gibersjeager.

Here D Coy has deployed; OC D Coy has already established a Command Post at the ambush site.  The four platoons are given a compass direction each and the air assets fly an ever expanding circuit, leap frogging the sections of the platoons out further and further by 5km hops until someone gets a trail.  The Saranian's use their skills and knowledge to guide the pilots to likely places for the trails to be. 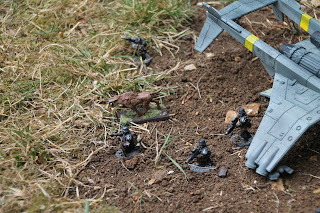 Having 'hopped' Feldwebel Nonead, himself a tracking instructor, sets his sections tracking hound out looking for likely scent trails. 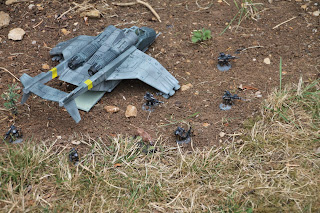 This airframe will then move to another Platoon to 'hop' one of their sections out.  It will be back with Feldwebel Nonead in about an hour.   This time Nonead (actually Betsie, the hound) did find a trail. 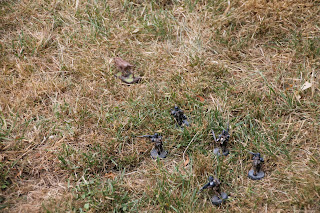 Alerted by Feldwebel Nonead, Feldwebel Clauac has his section dropped in one of the likely directions that someone fleeing Nonead's section might travel.  They then begin to work backwards, towards Nonead.  The other sections from this Platoon are being lifted to other likely routes that the cultist might take. 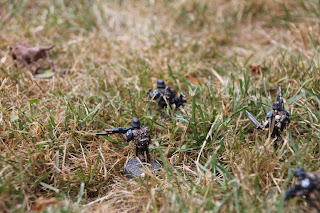 When their hound picks up the trail, Clauac and his section have to work hard to keep up. Although, we should note, the cultist has been running for three hours by now and the Saranians are only just starting. 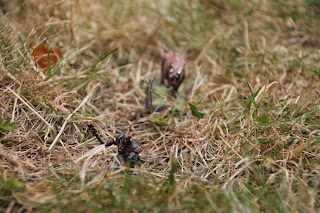 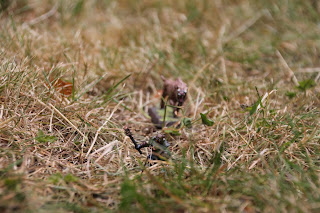 The cultist, whose name I am not allowed to divulge, was recovered slightly chewed and handed over to the Ordo Hereticus.  All further information is classified.

*The office of 3* General Sommonovic (Vostroya).  As 72 Army Group's Chief of Land Warfare, he is responsible for turning 4* General Zhukov's concept of operations into plans and orders.  He has ulcers.

I do look at my blog contents and historical posts from time to time.  I suspect that one of the reasons that posts attract a little more attention these days is that they are written without assuming that the reader knows exactly what I was thinking at the time I was writing it.  (some of the early stuff is truly awful).  I hope that this is the case and that the prose at least scans.  If you find a passage particularly stilted, clunky or unclear, do let me know - you'll be helping me to improve the blog - there's a chance that if you found it awkward, someone else just switched off all together. Cheers.