I'm drafting this on Mon 29 Jul 13.  I have a game coming up in a couple of weeks (ie a couple of weeks ago, by the time you read this) and need another bunker.  So I got another sheet of hardboard as a base and rescued some polystyrene from the mouse poo behind the bits box and future projects. 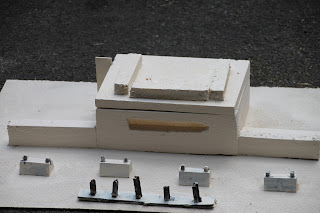 So I threw the basic shapes together from bits lying around. Its all stuck together with PVA and then covered in left over emulsion from the bathroom.  Or the kitchen.  Or something, there's always left over paint and it's good for undercoating terrain items.  The eagle eyed will spot the RSJ (that's "I beam" to the unitiated) sections in the foreground for bared wire and the concrete barrier sections with their reinforcing elements sticking out to of the top. 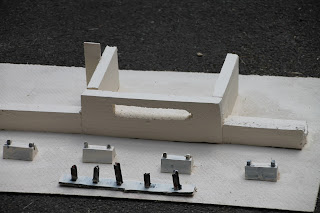 This is it with the removable roof removed.  There is a firing step (made from plastic bits including a walkway section from an Urban Warfare kit) but this bunker is not really for infantry.  That would be too easy.  There is a COD ladder behind the cover view shield you can see on the left of these pictures, to get infantry onto the roof. 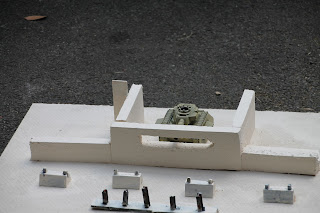 That's right, its a tank bunker.  Now, according to modern, rational thinking, an armoured vehicle would have sufficient armour to enable it to fulfill its battlefield role; if you wanted a tank's firepower in a static position, you would build a proper gun emplacement and leave the tank to use its maneuverability as it is designed to do. But this is the Grimdark of 40K and therefore the demented redundancy of tank bunkers is almost demanded. 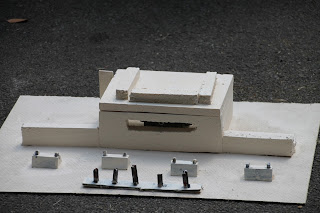 This is it with the roof on and a tank in place.  I reckon that there will be two squads on the roof, one on each wall outside and a PCS in the bunker, hiding behind the tank.  This piece is now fully based and painted with a few bits tarting up the inside and barbed wire on the obstacles. 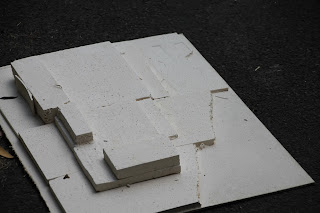 And Admiral Drax was worried about the lack of hills generally so I put one together.  This now has smoothed contours and is a likely spot for rows of sandbags, turning it into a more formidable obstacle. 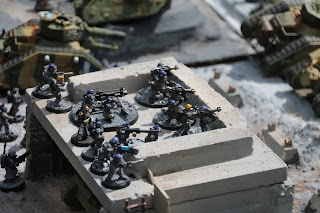 And here you see the finished article in action a fortnight later.  Apocalypse Battle Report coming soon.  There is a vanquisher in there.  It didn't hit anything in five turns, but, safe in it's bunker, didn't take a scratch.  Col Corbane suggested that following this vindication, perhaps bunkers for more tanks would be in order.  I have filed that suggestion at the bottom of the pile. 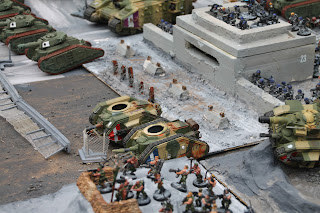