The Devos IV PDF had three levels of soldiery.  The regular army, who formed most of their three Divisions, was stiffened and filled out with reservist soldiers who drilled regularly as a second job and were liable to service within a given notice period.

Behind this, liable for call out only in times of war, were three infantry brigades, drawn from the populations of the major cities (one from each) formed from men who were volunteers who drilled four times a year, unpaid, but with concessions from various trade bodies and the status perk of wearing a uniform. 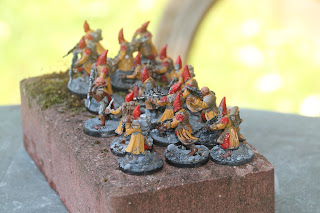 These volunteers, wear a buff uniform with a knee length coat.  The uniform includes blousoned red trousers with matching epaulettes and kepi.  Since being called out, these particular men have replaced their peacetime kepi with pointy hood, for reasons kept within Inqusitorial circles. 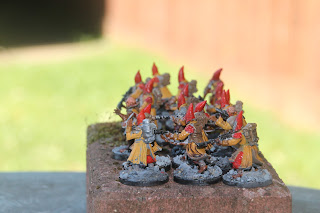 Those volunteers from Cities on Acre have been recruited into the Imperial Guard; though not in the formed units of 2nd Civil Defence Brigade.  They have been rebuilt about cadres from other off planet IG regiments as 2nd (Devos IV) Infantry Division of XXXVIII Corps. 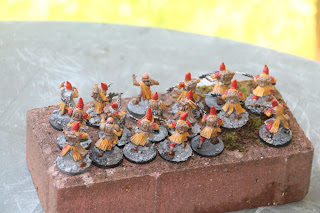 On the Brick of Scrutiny are volunteers from 86 Volunteer Battalion of the 3rd Civil Defence Brigade, drawn from the population of Xyphonica.  In their normal lives, a lot of these men are curators, choristers, cleaners and street vendors from the basilica precinct, one possible source of the pointy hoods. 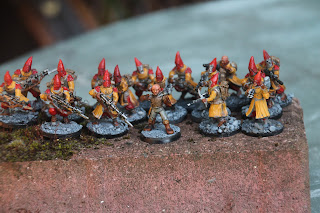 Although light on heavy weapons, these men have an intimate knowledge of the city and thus a certain advantage in the street fighting which is going to come.  And four years of war has given them time to mobilise and train properly, including motivational training, which isn't hard when you are defending your actual house from invaders from outer space. 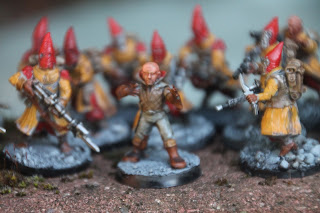 And this particular band are being led by an individual who has been incarcerated for many years. His prison record deleted, his crimes unknown, he seems to be one of the growing number of witches found on Devos IV as the amount of psychic activity increases, so the rate of individuals manifesting matches it, the cause and effect feeding each other in an escalating spiral.

And this is how, on paper, the first page of the volunteer's TO&E looked before the outbreak of war:


Anyway, bored with these now, so I've put them away and started some others....