That all important Elite slot

I've no idea if that's even a thing in 8ed.  But here are some interesting people for you to meet: 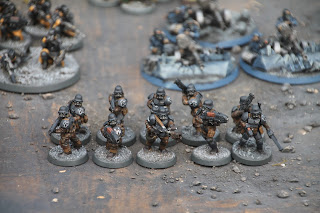 The shotgun toting veteran squad from the Saranian 5th, two plasma guns and a flamer.  The plasma pistol packing Feldwebel Joslonig also has a shotgun on his back.  These guys just add extra zing to the Saranians as they execute their tasks as the light infantry screen for the DKK.  Y'know, scout, hit and run, move through cover, that sort of thing. 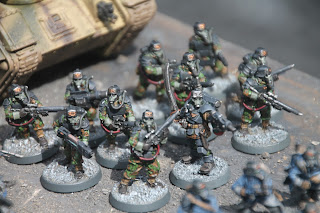 This team are the "z.b.V. Kader"( short for zur besonderen Verwendung, indicating a unit "for special use") of the DKK 19 Armd Regt's Grenadier detachment.  Generalmajor Resnick keeps them on a fairly short leash in case General Muntenfor pays a visit.  The assassination of any visiting staff officer would incur a sever loss of face.  But the DKK plenipotatiate for war's death whilst visiting your TAOR is not something even the corps of DKK officers want to see.  Hauptfeldwebel Halbe (no, it's not Bastogne, but look it up anyway) is the baddest mofo on this table, being Bastogne with DKK special rules.... 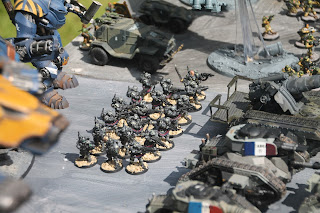 These guys are a part of 'Detachment 66' D-66 was formed from Kasarkin to rid Agrippina of plague zombies.  There are 19 of them here, a part of the initial deployment at the outset of the war.  They have spent a lot of time running training packages for DKK grenadiers and other incoming Kasarkin units  (there are a lot of Kasarkin on the table in the Cadian, Corbanian and Ozark sub units).   Army training teams on continental Acer, far away from the operational theatre, still operate their warzone specific and other courses, but these are now staffed and run by teams drawn from across the army.

Obviously there are other elite elements on the table (engineers, hydra batteries etc) depending on what army list the units are drawn from, but I hope this little splash of colour (the autumn flektarn on the Saranians and spring flektarn on the zbV were both by Pirate Viking Painting).  More soonish.
Posted by Zzzzzz at 22:35