Agents of the Inquisition 7 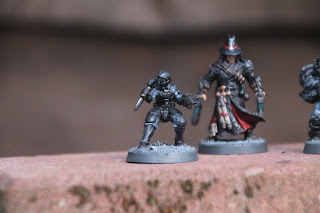 This is Inquisitor Raedsel and his associated.  The man at the front with the dagger and las pistol is his intrusion expert.  His unusual backpack contains a refractor field and grav chute.  It's almost certainly a Jokero item. 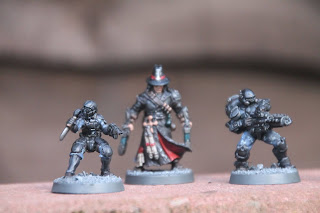 The Inquisitor himself is fond of a direct approach.  After his more clandestine associate has reported back that their quarry is where they want, the Inquisitor will get his associate Mr Emdd to affect an entry with his assault cannon and trust to his own towering presence (and TL plasma pistols) to make the arrest. 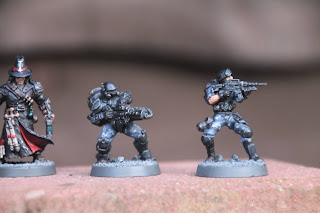 Mr Kal will invariably be flanking or covering the operation from a distance.  The others don't mind as he has halitosis and questionable standards of personal hygene.  However, he is good at what he does and is therefore tolerated. 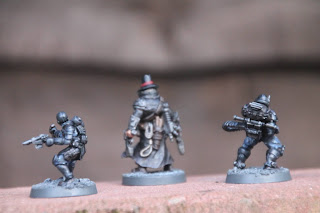 Inquisitor Raedsel is a dedicated Witch Hunter.  He and his team are well equipped for their task.  His methods are usually to pick up cold trails which have confounded other witch hunters and rattle the place up and see what falls out.  They are good detectives, using logic and forensics to follow up their leads.

He is quite often sent by the Conclave to investigate cases where Inquisitorial teams or agents have disappeared.   He is the most likely of the Inquisitors on Devos IV to call on the services of the SWAT team. 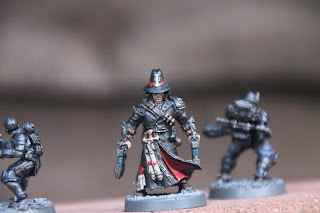 He does have a sense of humour, Mr Emdd is a talented chef with regard to his ethnically native cusine. The nameless burgler-cum-murderer has an encyclopedic knowledge of popular music from Bella Coronis within a narrow band of between nine and seven years ago.  And Mr Kal accepts with good grace that no-one wants to be anywhere near him.   Having said that. they're not the most social bunch ever.
Posted by Zzzzzz at 22:02