John, over at JTS, has mentioned here that our (ie for the United Kingdom of Great Britian and Northern Ireland and its terrirotial waters [and quite often a little further than that]) Search And Rescue (SAR) capability is being taken away from our armed forces as a cost saving. 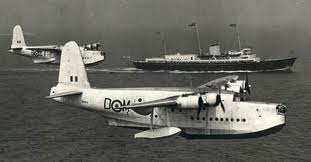 So, if you didn't know, our current SAR capacity was developed in WW2 in order to pick up pilots who found themselves in the English Channel; so it began with small fast boats, Sunderland Flying boats and so on, developing into the capability we have today.  Interestingly, as soon as helicopters became operationally available, our aircraft carriers (remember them ?) would have a SAR helo in the air whenever the fast air was being launched or recovered.  And if you ever wondered what ASW helos were for, they followed the carrier group keeping an eye on the sonar shadow.  But back to SAR. 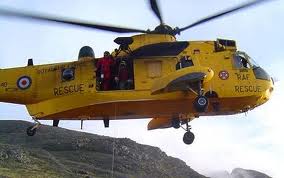 In most places mountaineers and climbers go, it pays to have personel insurance in case you do have to be rescued.  As the rescue is inevitably followed by bill for helicopters and ambulances, followed by the clinical or hospital bill.  So Brits heading off to the Rockies, European Alps or Hymalian mega ranges almost always take out insurance.

Here in the UK, most people don't bother. Rescue is free and healthcare, as David Lloyd George intended, is free at the point of delivery.  3rd party cover (in case you drop a rock on the person below you) is as far as most people go.  Here I am, in the Cairngorms, not being rescued (but yes, I have had  ride in the big yellow taxi, with the same climbing partner, too !) 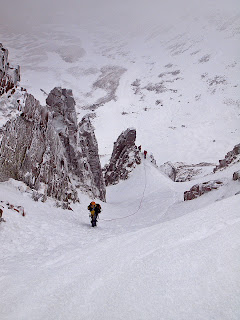 So there are two completely separate fuck ups waiting to happen; one is that our military pilots loose the rescue training.  There may well still be training carried out after the privatisation, but it will then be at cost (ie just practice, not incidently really rescuing members of the public at the same time) to the public purse.  The second is that the rescued party will soon (maybe not this year, but I doubt I'll find anyone willing to put money on it not happening) have to cover the costs. As previously mentioned; we in the UK are not good at recognising that someone pays for everything; Climbers are recalcitant and truculent butch and I can see the spectre of future courtcases looming.  Ho hum. 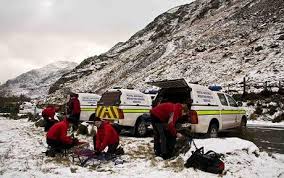 There is another important part of (military) mountain rescue capability that hasn't been mentioned at all; that is the non-flying bit of the RAF Mountain Rescue; their purpose is to search military air accident sites, primarily for the people (or bits thereof) but also for the weapons systems and secret bits (or bits thereof) that one perhaps doesn't really want to go anywhere near (ie I know of at least one USAFE airfame to 'land' in the Cairngorms was armed).  And of course, having these teams in situ must greatly aid the volunteer MRTs.  And if there's ever something like Locerbie again, there are expereinced people to lead the called out Military Aid to the Civil Authorities. 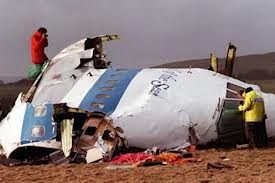 But hey, the government obviously arn't interested in 'just in case' or supporting the Ambulance Service in remote areas, as the current system does and the new private one will not.  Discussed here.  Doubtless it will be another lesson relearned at a later date.
Posted by Zzzzzz at 20:38