The forces of Freedom, the Defenders of the Liberal Republic of Devos IV

This links to both this, where I extolled the joy lining everything up for review, just to see it all there.   And also quite strongly with this, where I discussed what I thought made a good army picture.

These are elements of the 1st Benq Inf Div, as seen by the Imperial Guard's 17 Korps. 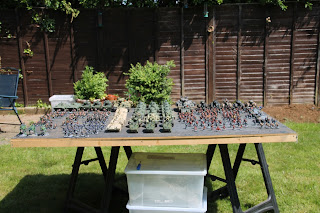 What you see in this picture are elements of 1 Benq Inf Div of the Devos IV PDF (of three regular and one reserve Divisions). 2nd Bde is based around two battalions of the 13th Mech Inf (the Tigers) on the left and elements of 1st Bde, based around two battalions of 99th Line Inf (the Bloodcoats).  All of the Armour is from 79 Armd Regt; the plain green scheme from the Bn supporting 2Bde, the two tone and grey schemes are from the Bn supporting 1Bde. 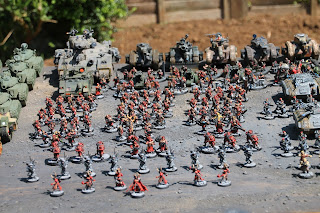 "Deamon" company of Bloodcoats, showing three Platoons of three squads, Hvy Stubber Squads with the CCS, Fire Support and Mortar Platoons behind, with the Quad Launcher detachment.  The men with radio and DF gear in front of the company are from "Spider" Coy 1/50 Network Support Regt; part of 1 Benq Div's HQ.  The ladies with flagellation devices at the very front are from Chaux Na M'rrsee's political cadre. 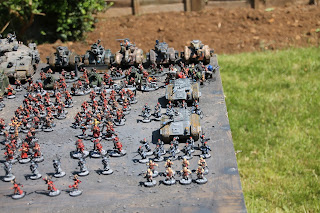 Serving alongside the Bloodcoats are the PBS of 2/50 Network Support Regt and two squads from 1/1 SF Regt (Chimera mounted melta vets).  The grey coloured tanks behind are those exported from Acer to Benq just before the Imperial landings at the starport. 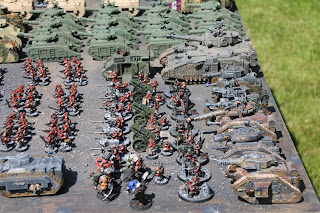 A view of the supporting units, also showing the Ogryn auxiliaries 'volunteered' to join the defence force.  They have been outfitted with stim-jectors, controlled by their handler (the officer figure behind them) to overcome their placid nature and make them useful in close combat.  Poor Ogryn. 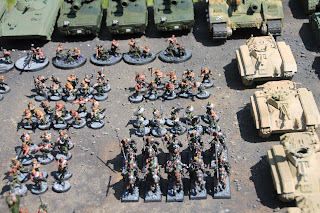 A view of the Tigers showing the rough riders in front of their veteran squad. 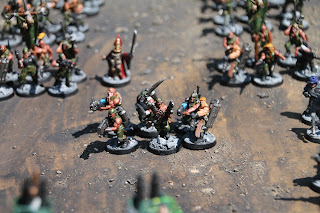 Colonel Blanich of the Tigers, with his squad of flamers and plasma gunners.  He's not much interested in strategy.  He's not really that interested in tactics.  But he is an effective leader.

These pictures were also taken on D-Day, in the sunshine.

The reasons that this picture is better are:

1: everything is finished.  I know that at the distance the photos are taken this might not show up much, but if you follow either of these blogs (mine or Col Corbane's) at all then you will know that all of his stuff is finished and despite improvement, some of mine still isn't.  I put it to you that you know this, and even if it's subconscious, it makes a difference.
2: background.  There is not much you can do with an army shot, but the Corbanian 1st are framed by the buildings around them; war damaged, but not so much that it overshadows the army and despite being nice/good terrain (look at it, it is), does not detract from the army by being more interesting.
3: framing.  The Corbanian picture takes up the whole frame, whereas the Devos IV PDF clearly have a garden chair in the background and boxes for the tanks under the rather obvious trestle table.   At this point I can hear you screaming about cropping pictures, but meh, I'd rather get them right in the first place.
4: scale.  If I want to produce a picture like Col Corbane's, I'll have to break my armies down into their major units and photograph bits individually.  Where this works with Col Corbane's picture is that you can look at it and identify the elements from the codex army list.  With my counts-as and Vraks list armies, it's still going to need explanation and therefore never quite reach the standard set by this picture, in that my pictures will always need a commentary.